:
This paper features an analysis of President Trump’s two State of the Union addresses, which are analysed by means of various data mining techniques, including sentiment analysis. The intention is to explore the contents and sentiments of the messages contained, the degree to which they differ, and their potential implications for the national mood and state of the economy. We also apply Zipf and Mandelbrot’s power law to assess the degree to which they differ from common language patterns. To provide a contrast and some parallel context, analyses are also undertaken of President Obama’s last State of the Union address and Hitler’s 1933 Berlin Proclamation. The structure of these four political addresses is remarkably similar. The three US Presidential speeches are more positive emotionally than is Hitler’s relatively shorter address, which is characterised by a prevalence of negative emotions. Hitler’s speech deviates the most from common speech, but all three appear to target their audiences by use of non-complex speech. However, it should be said that the economic circumstances in contemporary America and Germany in the 1930s are vastly different.
Keywords:
text mining; sentiment analysis; word cloud; emotional valence
JEL Classification:
C19; C65; D79

The analysis features the use of a number of R libraries which facilitate data mining and sentiment analysis, namely word cloud, tm and syuzhet, plus a variety of graphics packages. The R package tm has a focus on extensibility based on generic functions and object-oriented inheritance, and provides a basic infrastructure required to organise, transform, and analyse textual data. The basic document is imported into a “corpus”, which is then transformed into a suitable form for analysis using stemming, stopword removal, and so on. Then, we can create a term-document matrix from a corpus which can be used for analysis.
Once we have the text in matrix form, a huge amount of R functions (e.g., clustering, classifications, among others) can be applied. We can explore the associations of words, correlations, and so forth, and screen the text for frequently occurring words. The analysis can be used to create a word cloud of the most frequently used words. Feinerer and Hornik [4] provided an introduction to the package.
The R package wordcloud by Fellows [6] provides functionality to create word clouds, visualise differences and similarity between documents, and avoid over-plotting in scatter plots with text. We use the R package “syuzhet” for sentiment analysis. The package comes with four sentiment dictionaries, and provides a method for accessing the robust, but computationally expensive, sentiment extraction tool developed in the NLP group at Stanford University. We transform the text in character vectors. Once we have the vector, we can select which of the four sentiment extraction methods available in “syuzhet” to employ. We use the default syuzet lexicon, which was developed in the Nebraska Literary Lab under the direction of Jockers [5].
The name “Syuzhet” comes from the Russian Formalists Shklovsky [26] and Propp [27], who divided narrative into two components, the “fabula” and the “syuzhet”. “Syuzhet” refers to the “device” or technique of a narrative, whereas “fabula” is the chronological order of events. ‘Syuzhet”, therefore, is concerned with the manner in which the elements of the story (fabula) are organised (syuzhet). The R syuzhet package attempts to reveal the latent structure of narrative by means of sentiment analysis, and we can construct global measures of sentiment into eight constituent emotional categories, namely trust, anticipation, fear, joy, anger, sadness, disgust and surprise.
While these global measures of sentiment can be informative, they tell us very little in terms of how the narrative is structured and how these positive and negative sentiments are activated across the text. To explore this, we plot the values in a graph where the x-axis represents the passage of time from the beginning to the end of the text, and the y-axis measures the degrees of positive and negative sentiment.
President Trump’s first SOU in 2018 contained 5169 words and 30,308 characters, while his second SOU in 2019 contained 5493 words and 32,204 characters. Therefore, the two addresses were of similar size.
We use the R package “tm” and develop the appropriate R code to undertake the Zipf and Mandelbrot power law distribution analysis to assess the degree to which the four political addresses deviate from common language.
The limitations of the analysis should be borne in mind. The context of “natural language processing”, of which sentiment analysis is a component, is important. The use of sarcasm and other types of ironic language are inherently problematic for machines to detect, especially when viewed in isolation.

3. Results and Interpretation of the Analysis

In this paper, we have analysed President Trump’s two SOUs and contrasted the content with those of the last SOU of President Obama and that of Hitler’s 1933 Berlin Proclamation. All four are political speeches, and share a great deal of commonality. The sentiment analysis showed that they emphasize the nation, America and American, in the case of the two US Presidents, and Nation and German, in the case of Hitler. The word “will” features prominently in all four speeches, and relates to the respective political agendas of the speakers. The emotional tenor of the speeches of the two US Presidents is more positive than adopted by Hitler in his 1933 Berlin Proclamation. All speakers chose to end their speeches on a positive emotional note, and all four speeches contain Nationalistic elements.
The analysis also includes an application of the Zipf and Mandelbrot laws. The fact that all four had a slope of less then negative one, which would be standard speech in this framework, indicates that all three speakers had targeted their audiences and simplified the language used in their speeches. Hitler’s use of language was the most distant from standard speech with a score of negative 0.57. This suggests his status as a skillful mob-orator is justified. Presidents Trump and Obama were less extreme but still had slope coefficients with values around negative 0.7, suggesting that they also target their audiences carefully.
The limitation of the text-mining approach adopted in the analysis of the contents of these four speeches is that it does not feature a verification of the statements made, and cannot pick up nuances in meaning and context. However, the approach does provide a broad indication of the structure and emotional flavour of the content, subject to the limitations of the lexicon applied. The Zipf analysis highlights the degree to which speech patterns within the speeches deviate from normal language values. 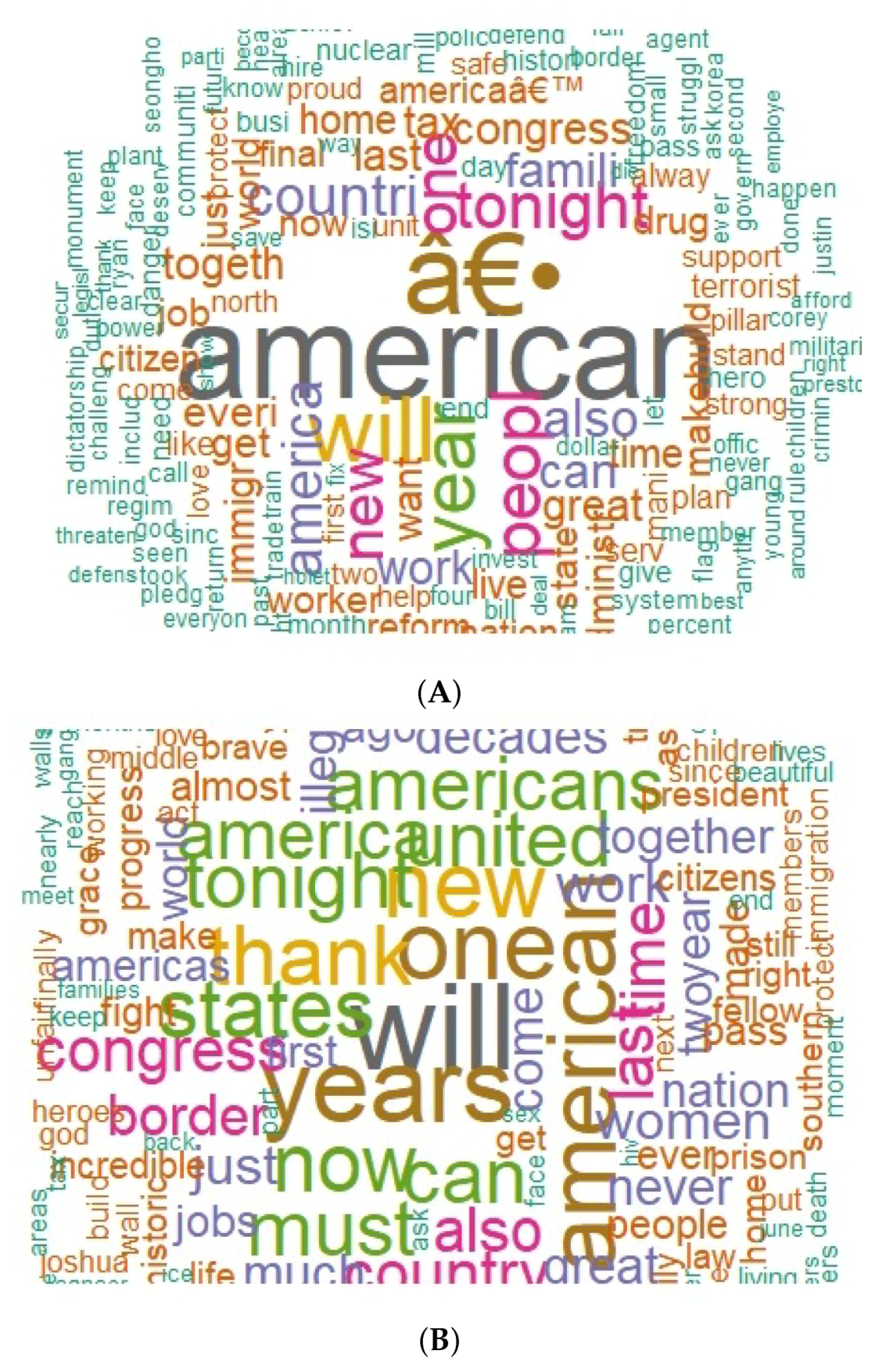 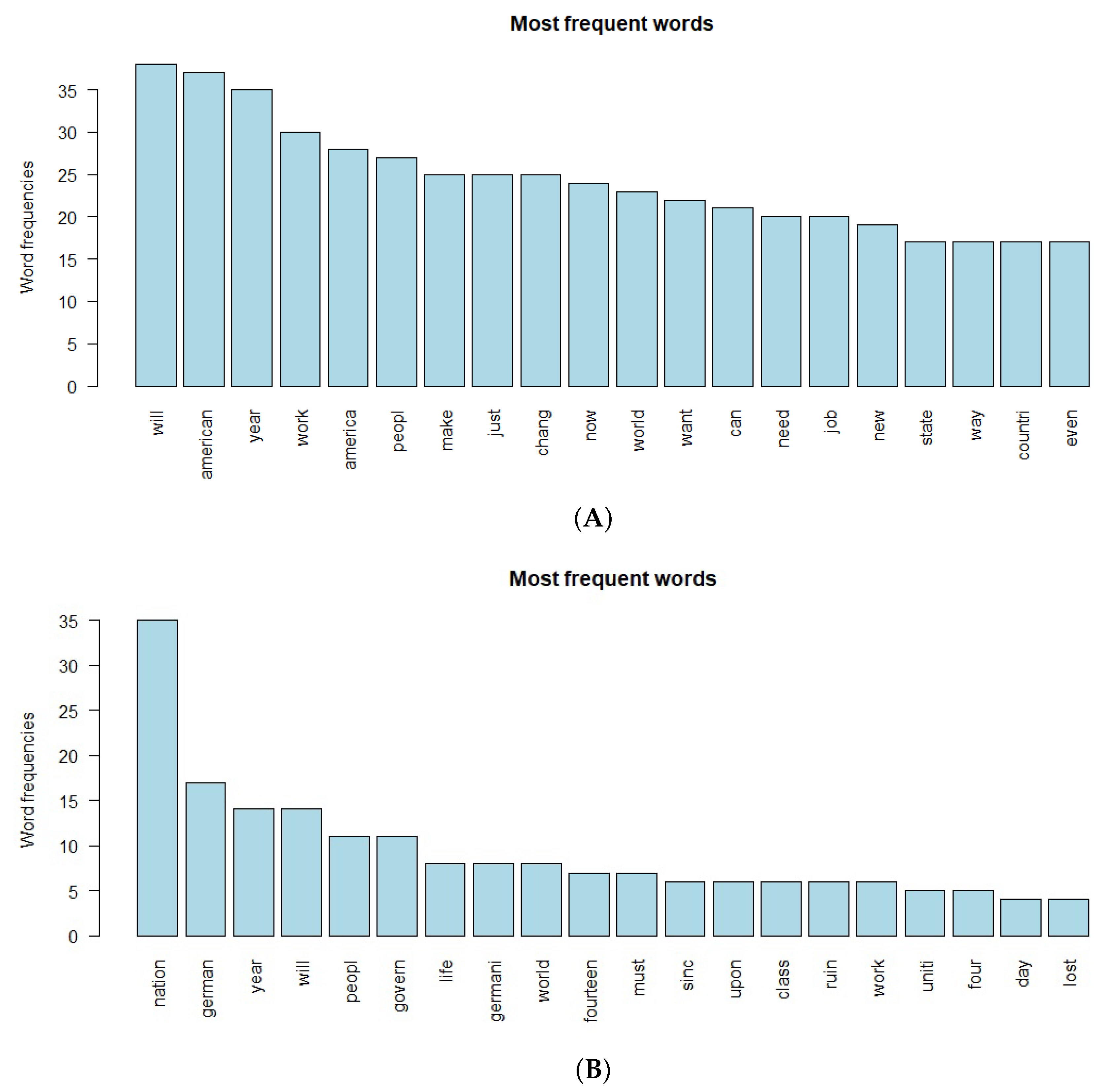