The concepts of Open Educational Resources (OER) and Open Educational Practices (OEP), regarded as two pillars of the broader open education movement, have been evolving since the concept of OER was first coined in the 2012 Paris Declaration. Several research studies have been conducted to investigate the impacts of OER and OEP adoption and implementation in universities. However, most of those studies have focused on western and developed countries, and little information is known about developing countries, especially Asian ones. Particularly, China was one of the first Asian countries to adopt open education and its related strategies following the MIT OpenCourseWare conference in Beijing in 2003. This study conducts a systematic literature review to investigate the current state of the art of OER and OEP in China. The findings show that several governmental, organizational, and institutional initiatives have been launched to facilitate OER adoption in China. They also show that while several OEPs have been implemented, there is still a continuous need to work on these practices and further investigate their impacts on learning outcomes and behaviors, as no current reviewed study has done so. Finally, a generic framework of OER and OEP challenges is presented along with recommendations to further enhance the adoption of OER and OEP in China. View Full-Text
Keywords: open education; open educational resources; open educational practices; China; policy open education; open educational resources; open educational practices; China; policy
►▼ Show Figures 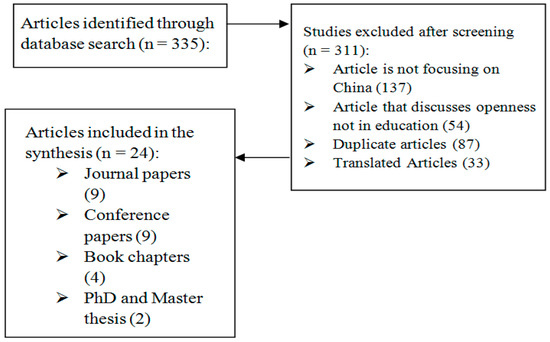