Hydropower Development and Fishways: A Need for Connectivity in Rivers of the Upper Paraná Basin

:
South American rivers have become intensely affected by the construction of hydroelectric dams that block the river’s connectivity for migratory fish species. In order to mitigate the problems caused by dams and to reestablish connections between habitats, fishways are implemented. Fishways are structures that aid fish in overcoming obstacles and help preserve migratory, reproductive, and feeding routes. This study performed an inventory of all hydropower plants—present and future—in the Upper Paraná River, with the objective of identifying fishways unknown to scientific literature, as well as the task of mapping them. By doing so, the current situation of structural connectivity via fishways in the Upper Paraná River Basin was described. Overall, 389 dams along 209 rivers were identified; of these, only 9% (35 dams) have fishways. In addition, an alarming explosion of future medium-sized hydropower plants was observed, with an expectation of an almost 500% increase in relation to those existing. This data reveals a trend of reduction of free-flowing river stretches, which are crucial habitats for Neotropical potamodromous species, and point to a deficiency in the structural connectivity of existing hydropower dams. Furthermore, if the implementations of these expected constructions are associated with limited connectivity as a result of the absence of fishways, the management of fisheries and their resources in the Upper Paraná River may become unsustainable.
Keywords:
potamodromous fish; fish ladder; fisheries management; free-flowing rivers; Neotropical

The Paraná River basin has an extension of 2.8 × 106 km2 and covers roughly 80% of the Paraná-Paraguay River basin [11]. Also known as La Plata River basin, it includes areas of Brazil, Argentina, Bolivia, and Paraguay (Figure 1). The Paraná River is formed by the confluence of the Paranaíba and Grande rivers and possesses important tributaries such as Tietê, Sucuriú, Verde, Pardo, Aguapeí, Ivinhema, Amambaí, Iguatemi, Paranapanema, Ivaí, Piquiri, and Iguaçu rivers. This fluvial system is distributed through areas of Brazil, Paraguay, and Argentina. The main trajectory of the Paraná River is roughly 4600 km in length, and the annual sediment load is estimated to be over 1.5 × 108 tons [50]. The mainstem of the Upper Paraná River extends 750 km upstream of the Itaipu Dam (Brazil-Paraguay border) and northeasterly up to the confluence of the Grande and Paranaíba rivers [22], comprising Brazilian and Paraguayan territory. However, due to the lack of information regarding hydroelectric power plants and their respective fishways in Paraguay, this study limits itself to the dams located in the Upper Paraná River Basin within Brazilian territory, including the Iguaçu River and its tributaries. The Upper Paraná River in Brazil partly drains the states of Goiás, Minas Gerais, Mato Grosso do Sul, São Paulo, Paraná, and Santa Catarina.

The geographical coordinates of the hydropower plants in operation obtained through the ANEEL website were inserted into the Google EarthTM software and were utilized to visually inspect each hydroelectric enterprise to verify the existence of fishways [1]. The information regarding the types of fishways, design, construction date, and materials, were obtained through broad review of available literature, including scientific articles, books, and reports. The origin of the information regarding the fishways were classified into scientific sources (books and articles), reports (from environmental agencies, hydroelectric plants, universities, as well as doctorate thesis), and visual inspection (fishways which did not have any previous mention in the literature and were identified for the first time through Google EarthTM). With a basis in the available data, the fishways (type and design) were categorized according to Clay (1995), Larinier (2001), and Silva et al. (2018) [21,26,27].

A risk map of river connectivity of the Upper Paraná River Basin was constructed. For this, the river stretches were quantified and classified in three categories: (i) blocked—river stretches fragmented by dams without fishways; (ii) connected—river stretches dammed but connected by fishways at dams; (iii) free-flowing river stretches—river stretches with natural flow.
It was considered hydropower plants in operation, however, only in this analysis the Baixo Iguaçu Dam (large-sized), the last one of a cascade of dams along the Iguaçu River, was included, which started the operation in March 2019.

There was no significant difference in proportion of the type of information regarding fishways, that is, fishways without information (fishway found by visual inspection), with scientific information, and with reports (test for equal proportions: x2 = 1.523, df = 2 p = 0.469). Overall, of the 37 fishways encountered, 35.1% (n = 13) did not possess any type of available information and were only identified for the first time through satellite imaging (Figure 3A; Table 2). Alternatively, 40.5% of the fishways (n = 15) displayed scientific information (articles or books) in regard to evaluation of attraction, efficiency, or continuous monitoring. Finally, 24.3% of the fishways (n = 9) had information available through reports, which can best be described as grey literature (Figure 3A). Of the fish passages with available scientific information, the fish ladder at Engenheiro Sérgio Motta hydropower dam (known as Porto Primavera, São Paulo State) stood out as the most studied, having been the subject of seven published scientific articles.

3.5. History of Fishways in the Upper Paraná River Basin

Regarding all the hydropower plants currently in operation in the Upper Paraná River Basin (n = 389), only 9% (n = 35) have some type of fishway to provide structural connectivity (Figure 5). Furthermore, at least two fish ladders are inactive, both are fish ladders in the Paranapanema River at the Canoas I and II dams (Table 2).
The Upper Paraná River Basin is composed of a fluvial network that extends through 154,608 km, where 209 rivers (32,490.4 km) of this network have at least one hydropower dam, which corresponds to 0.0119 dam km−1. However, only 10% (n = 21) of these rivers have some type of fishway to provide structural connectivity (Figure 6). The main water courses of the Upper Paraná River Basin are composed of a 31,454 km river network, where only 9% (2788 km) are connected by fishways, 48% (15,187 km) are blocked, and 43% (13,598 km) are free-flowing (Figure 6).
The Paranapanema and Sapucaí rivers present the highest number of dams with fishways (n = 5), followed by the Grande, Itararé, Paraná, Pardo, Sorocaba, and Mogi-Guaçu rivers (n = 2 each river), while the other rivers have only one dam with a transposition system (Table 3).
Within a geopolitical distribution, 71.4% of dams with fishways (n = 25) reside within the state of São Paulo, followed by the states of Minas Gerais, Goiás, and Paraná, with 8.6% (n = 3) each, and the state of Mato Grosso do Sul with 2.9% (n = 1) (Table 3).

Eighteen migratory fish species are listed in Table 4, which occur in the Upper Paraná River Basin. Some species are rare in this region, such as Salminus hilarii, Steindachneridion scriptum and Zungaro jahu. Regarding the status of conservation, six species are threatened, among them one near threatened, NT, (Pseudoplatystoma corruscans); two vulnerable, VU, (Salminus brasiliensis, Rhinelepis aspera); and three endangered species, EN, (Brycon orbignyanus, S. scriptum and Z. jahu). However, B. orbignyanus is also classified as critically endangered, CR, in the State of São Paulo, Brazil. The migratory fish are medium and large-sized species (characiformes, catfish and armored catfish) and exhibit varied feeding, with short reproductive periods (ranging from two to four months) between October and March. Most species are restricted to stretches of free-flowing rivers (FFRS) of dams, in the mainstem and/or tributaries, while some species also inhabit reservoir-dammed areas (Prochilodus lineatus, Pimelodus maculatus, Pinirampus pirinampu, Pterodoras granulosus, and Rhaphiodon vulpinus). Migratory species move longitudinally in the mainstem river, upstream and/or downstream, as well as most species perform lateral movements in dam-free tributaries.
Particularly in the Lower Iguaçu River, upstream of the Iguaçu Falls, there is an endemic and endangered species, and possibly migratory, Steindachneridion melanodermatum, similarly to S. scriptum. This species is restricted to a river stretch of 190 km, dam-free, and its knowledge is still limited.

We are grateful to CNPq for the Productivity Grant in Technological Development and Innovative Extension—DT (SM), and Coordination for the Improvement of Higher Level Personnel—CAPES for the Doctoral scholarship (LFC) and Master scholarship (APSB). We are also grateful to the Araucária Foundation for technical fellowship (JFMS). Any use of trade, firm, or product names is for descriptive purposes only and does not imply endorsement. 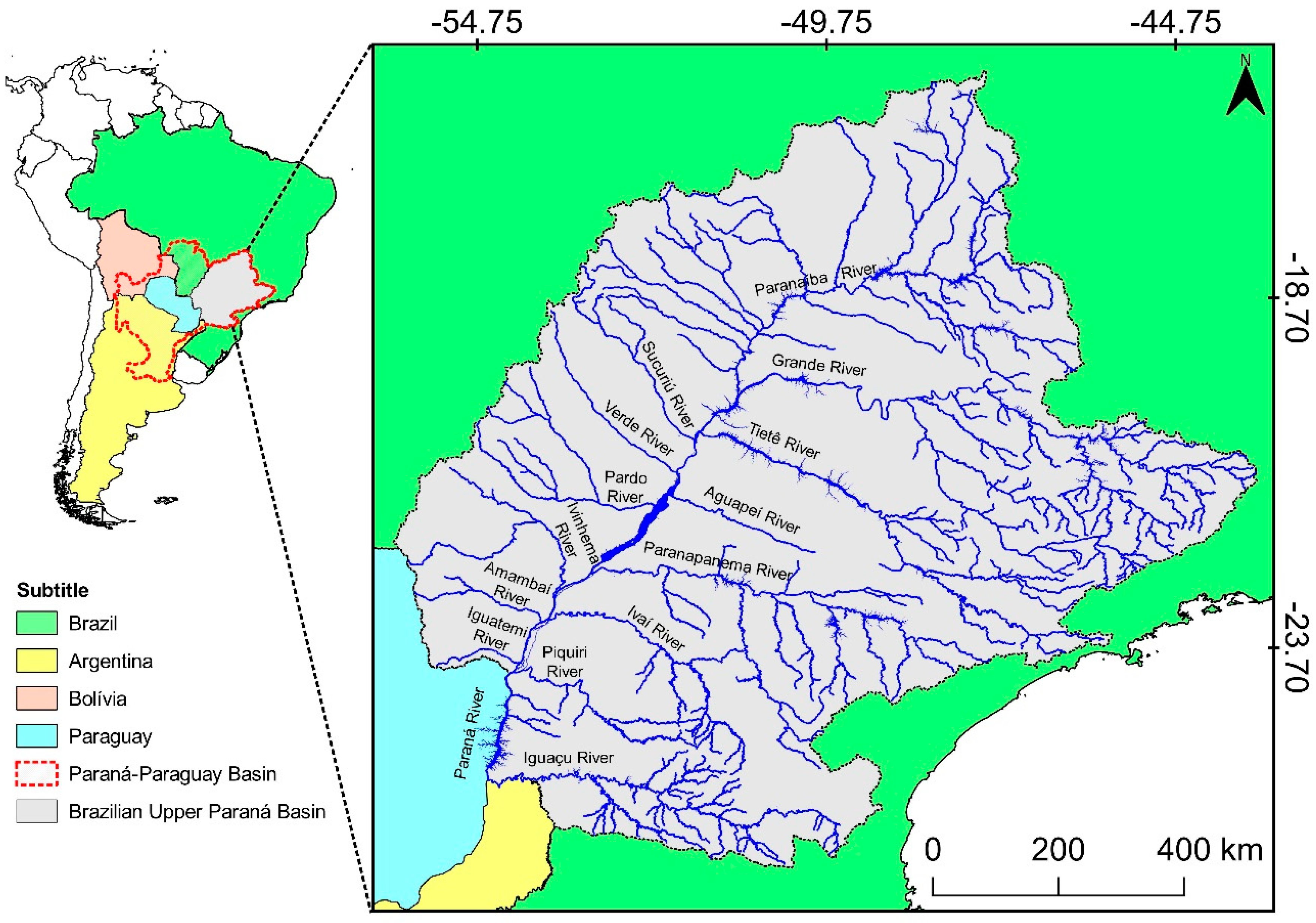 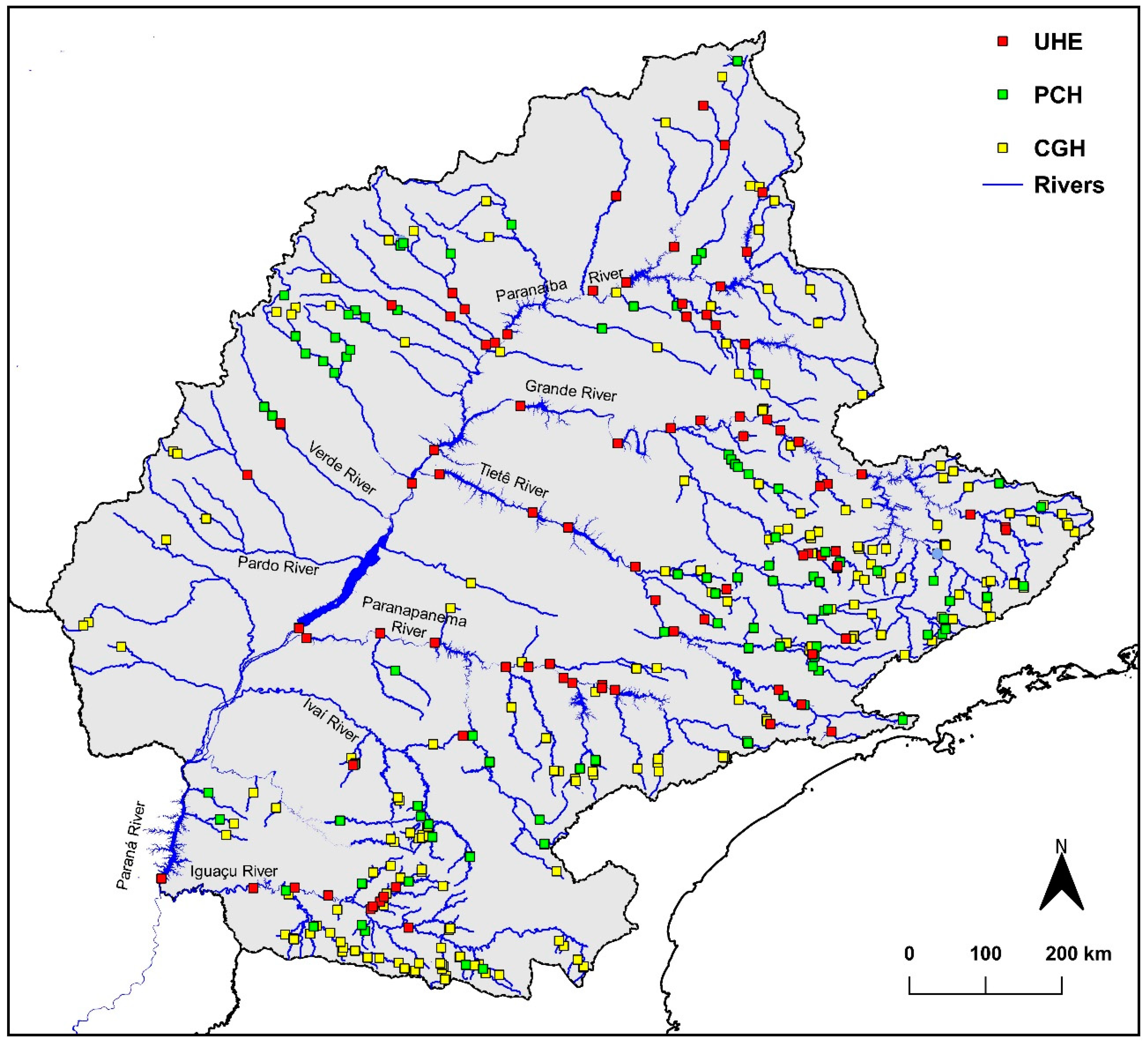 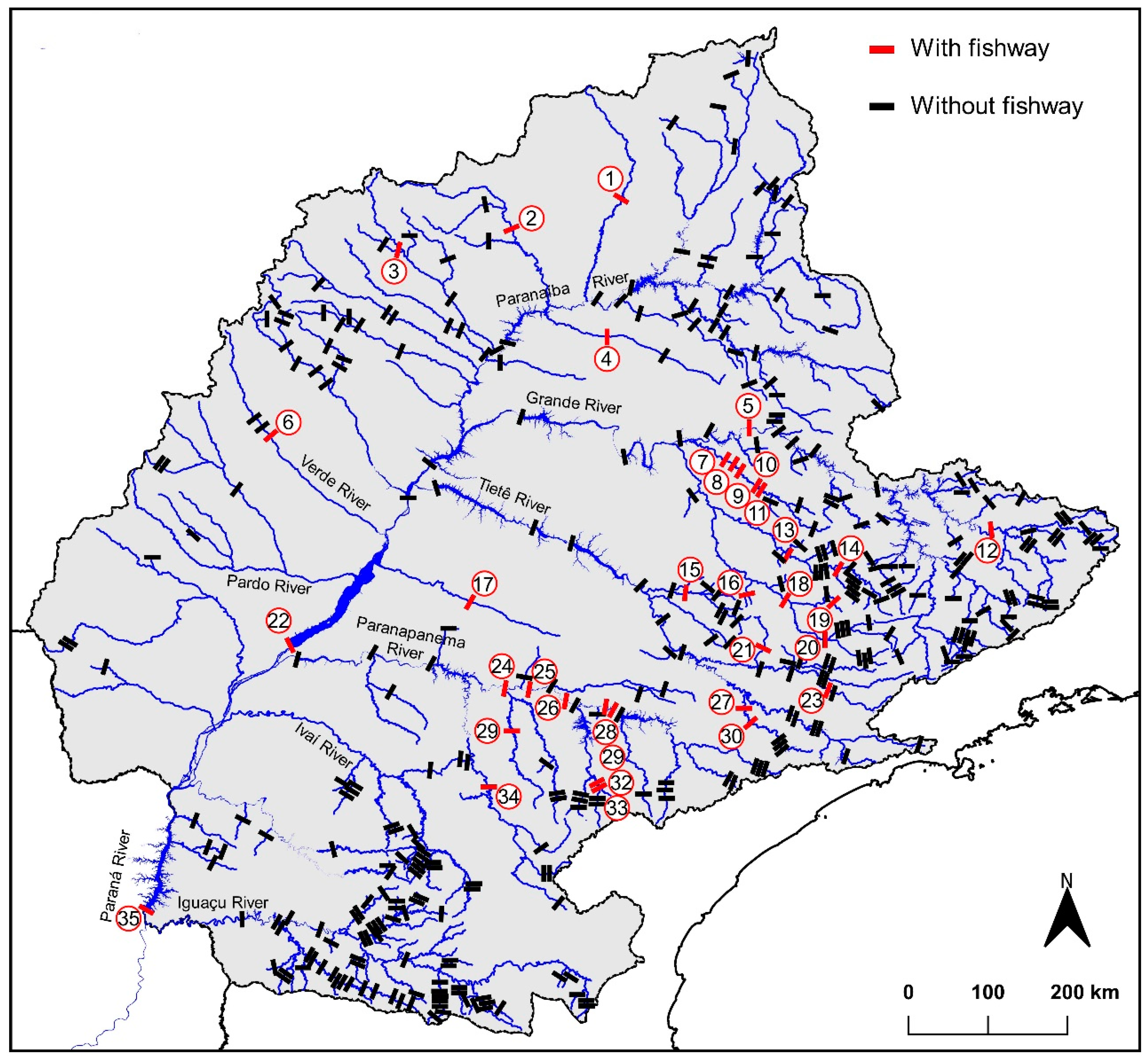 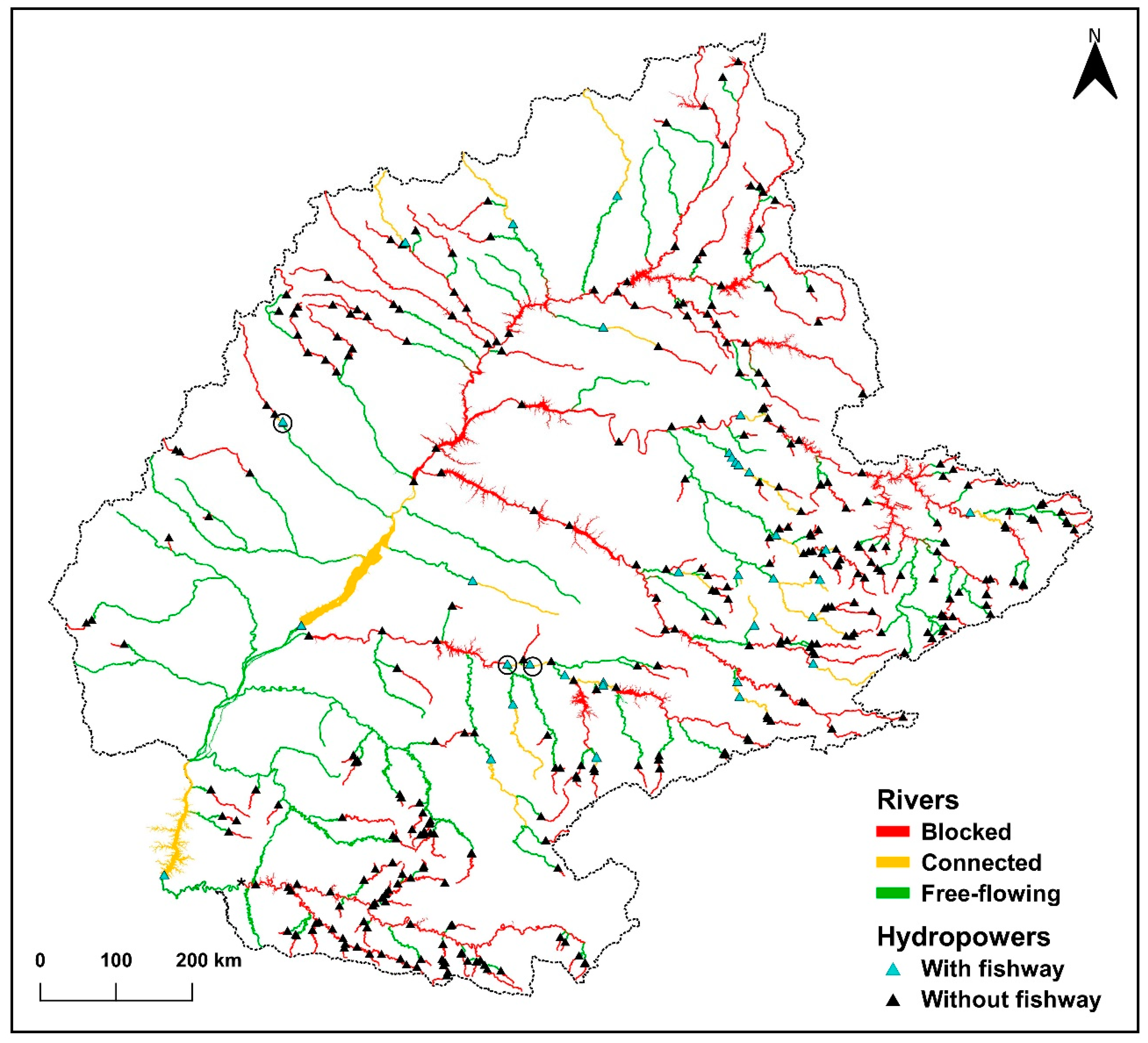