Debris Flow Risk Assessment Based on a Water–Soil Process Model at the Watershed Scale Under Climate Change: A Case Study in a Debris-Flow-Prone Area of Southwest China

Risk assessment lays a foundation for disaster risk reduction management, especially in relation to climate change. Intensified extreme weather and climate events driven by climate change may increase related disaster susceptibility. This may interact with exposed and vulnerable socioeconomic systems to aggravate the impacts and impede progress towards regional development. In this study, debris flow risk under climate change was assessed by an integrated debris flow mechanism model and an inclusive socioeconomic status evaluation. We implemented the method for a debris flow-prone area in the eastern part of the Qinghai-Tibet Plateau, China. Based on the analysis of three general circulation models (GCMs)—Beijing Climate Center Climate System Model version 1 (BCC_CSM), model for Interdisciplinary Research on Climate- Earth System, version 5 (MIROC5, and the Community Climate System Model version 4 (CCSM4)—the water–soil process model was applied to assess debris flow susceptibility. For the vulnerability evaluation, an index system established from the categories of bearing elements was analyzed by principle component analysis (PCA) methods. Our results showed that 432 to 1106 watersheds (accounting for 23% to 52% of the study area) were identified as debris-flow watersheds, although extreme rainfall would occur in most of the area from 2007 to 2060. The distributions of debris flow watersheds were concentrated in the north and transition zones of the study area. Additionally, the result of the index and PCA suggested that most areas had relatively low socioeconomic scores and such areas were considered as high-vulnerability human systems (accounts for 91%). Further analysis found that population density, road density, and gross domestic production made great contributions to vulnerability reduction. For practical mitigation strategies, we suggested that the enhancement of road density may be the most efficient risk reduction strategy. View Full-Text
Keywords: climate change; rainfall-induced debris flow; mechanism model; risk reduction management climate change; rainfall-induced debris flow; mechanism model; risk reduction management
►▼ Show Figures 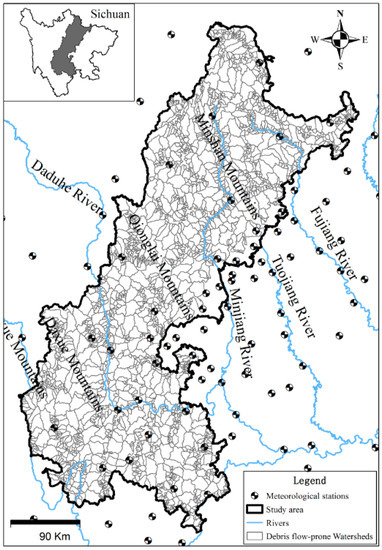