Understanding the Spatial Agglomeration of Participation in Agri-Environmental Schemes: The Case of the Tuscany Region

The Underground Economy and Carbon Dioxide (CO2) Emissions in China

China aims to reduce carbon dioxide (CO2) intensity by 40–45% compared to its level in 2005 by 2020. The underground economy accounts for a significant proportion of China’s economy, but is not included in official statistics. Therefore, the nexus of CO2 and the underground economy in China is worthy of exploration. To this end, this paper identifies the extent to which the underground economy affects CO2 emissions through the panel data of 30 provinces in China from 1998 to 2016. Many studies have focused on the quantification of the relationship between CO2 emissions and economic development. However, the insights provided by those studies have generally ignored the underground economy. With full consideration of the scale of the underground economy, this research concludes that similar to previous studies, the inversely N-shaped environmental Kuznets curve (EKC) still holds for the income-CO2 nexus in China. Furthermore, a threshold regression analysis shows that the structural and technological effects are environment-beneficial and drive the EKC downward by their threshold effects. The empirical techniques in this paper can also be applied for similar research on other emerging economies that are confronted with the difficulties of achieving sustainable development. View Full-Text
Keywords: carbon emissions; informal economy; EKC; industry structural effects; technological effects carbon emissions; informal economy; EKC; industry structural effects; technological effects
►▼ Show Figures 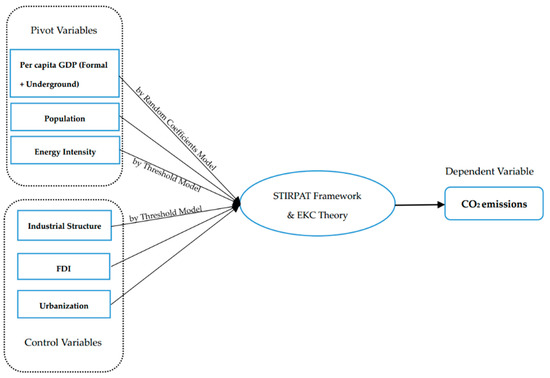