Bread is a staple food in Norway, with a yearly per capita consumption of 52 kg. It is an important source of energy, dietary fibre and protein as well as certain minerals and vitamins. Previous studies have shown that bread has a relatively low environmental impact compared with other foods. Food waste studies, however, have shown that bread and other baked goods have a high wastage rate in Norway. On the basis of lower Norwegian wheat yields, it is therefore expected that the environmental impact of bread could be higher than in other European countries. The purpose of this study was to assess the environmental impact of bread from cradle to grave, identify environmental hotspots, examine the role of packaging in bread waste and identify possible remediation measures with a particular focus on the post-farm value chain. The results showed that for every kilogram of bread consumed, the global warming potential was 0.99 kg CO2-eq, the eutrophication potential was 7.2 g PO4-eq, the acidification potential was 8.4 g SO2-eq and the cumulative energy demand was 18 MJ. The principal uncertainty within the calculation was the use of database data for the 21 ingredients. For example, the effect of soil mineralisation, which could give significant CO2 and N2O emissions, was not included because figures have only been quantified for a few ingredients and there is no international agreement on the methodology. The primary hotspot was the production of the ingredients, principally at the agricultural stage, while bread waste took the second place. The highest potential for the reduction of post-farm environmental impact lies in reducing product wastage at the retail and consumer stages. Consumers already employ strategies to reduce wastage, such as using extra packaging and freezing and toasting bread. This study shows that other consumer packaging solutions can keep the bread fresh for longer, thus reducing wastage and the need for the abovementioned consumer strategies. Nevertheless, other researches in this subject have shown that consumer preferences and behaviours play a significant role in the creation of bread waste, and this should therefore be taken into account when planning reduction measures. View Full-Text
Keywords: bread; LCA; food waste; packaging; consumer habits; Norway bread; LCA; food waste; packaging; consumer habits; Norway
►▼ Show Figures 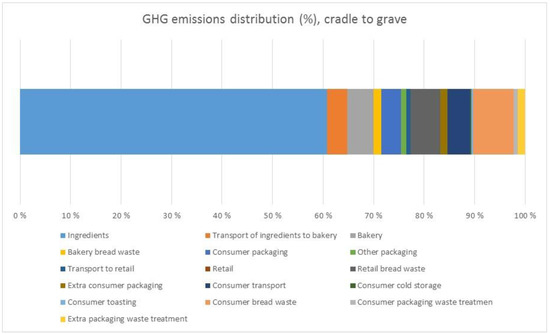 Svanes, E.; Oestergaard, S.; Hanssen, O.J. Effects of Packaging and Food Waste Prevention by Consumers on the Environmental Impact of Production and Consumption of Bread in Norway. Sustainability 2019, 11, 43. https://doi.org/10.3390/su11010043


Svanes E, Oestergaard S, Hanssen OJ. Effects of Packaging and Food Waste Prevention by Consumers on the Environmental Impact of Production and Consumption of Bread in Norway. Sustainability. 2019; 11(1):43. https://doi.org/10.3390/su11010043


Svanes, Erik, Sofie Oestergaard, and Ole J. Hanssen. 2019. "Effects of Packaging and Food Waste Prevention by Consumers on the Environmental Impact of Production and Consumption of Bread in Norway" Sustainability 11, no. 1: 43. https://doi.org/10.3390/su11010043