Does Institutional Context Affect CSR Disclosure? A Study on Eurostoxx 50
Next Article in Special Issue

Research on blue and green water footprints (WF) for China has typically been carried out based on bottom-up and top-down approach using a single-region input–output table. However, this research typically lacks detail on the sectoral interrelationships which exist between China and its trading partners in other countries/regions of the world. Here, a multi-region input–output approach using the WIOD database was applied to quantify the blue and green WF for China in 2009. The quantification was conducted from both production (WFP) and consumption (WFC) perspectives. The results show that the total WFP for China in 2009 was 1152.2 km3, second only to India. At 1070.9 km3, China had the largest WFC volume in the world. The internal WF was 953.5 km3, taking the substantial share for both the WFC and WFP. Overall, China’s trade resulted in a net export of 53.5 km3 virtual water. In contrast, the agricultural sector resulted in a net import of 70.6 km3 virtual water to China, with United States, Brazil, and Canada acting as major suppliers. This study suggests that quantifying the WF of China at global level through a MRIO framework is a necessary step towards achieving sustainability for China’s water management. View Full-Text
Keywords: water footprint; blue and green water; production and consumption perspectives; multi-region input–output analysis water footprint; blue and green water; production and consumption perspectives; multi-region input–output analysis
►▼ Show Figures 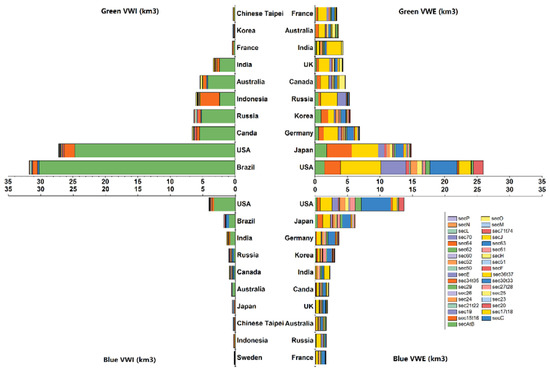