The Long-Term Impact of Disaster Loans: The Case of Small Businesses after Hurricane Katrina
Next Article in Special Issue

Common wheat is currently the most widely grown cereal and its grains are mainly used to produce white bread. Contrary to plant seeds, the plant itself may be considered an agricultural waste which is used as an animal feed, soil fertilizer, or pelletized solid fuel to produce heat energy. While wheat straw is used widely in sustainable building construction, mostly as straw bales, the use of the thin dry husk around the grain, the wheat chaff, remained unexplored. An insulation panel made of a medium-density fiberboard (MDF) envelope and wooden studs was manufactured. The 150-mm gap between the MDFs was filled with dry wheat chaff. The thermal transmittance of the panel was determined under static and dynamic thermal conditions using a modified guarded hot box method. The results were compared to an insulation panel of the same construction that was filled with mineral wool. The thermal transmittance of wheat chaff under steady-state and dynamic conditions was 0.307 W m−2 K−1 and 0.298 W m−2 K−1, respectively. While in steady-state conditions the mineral wool outperforms the wheat chaff insulation, after a period of dynamic thermal loading, the ability of both insulations to resist heat-energy dissipation becomes similar. In conclusion, wheat chaff agrowaste seems to be a promising environmentally friendly alternative to artificial thermal insulation. Moreover, the determination of the thermal transmittance of bio-based materials with relatively high specific heat capacities under dynamic thermal loading, provides more accurate results, compared to steady-state conditions. View Full-Text
Keywords: wheat chaff; agricultural waste; sustainable; thermal insulation; thermal transmittance; steady-state; dynamic; hot box wheat chaff; agricultural waste; sustainable; thermal insulation; thermal transmittance; steady-state; dynamic; hot box
►▼ Show Figures 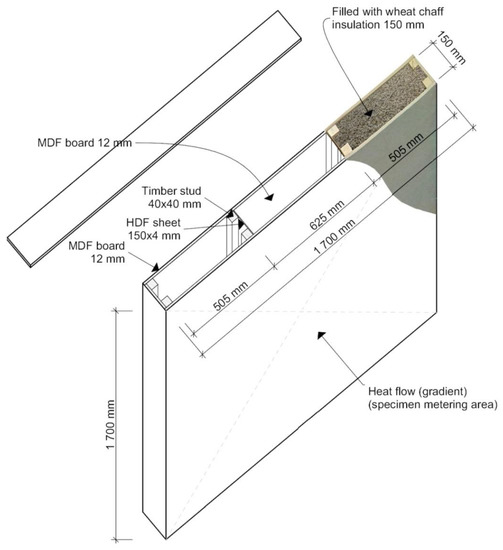