Spatial Evolution of Producer Service Sectors and Its Influencing Factors in Cities: A Case Study of Hangzhou, China
Next Article in Special Issue

Israel has been a global frontrunner in (a) irrigation water application efficiency; (b) utilization of non-conventional (recycled and brackish) water supplies containing salts for irrigation; and recently (c) large-scale seawater desalination to provide water. Irrigation with water high in salts in many dry regions has been shown to be non-sustainable, mostly due to contamination of soils, subsoils, and groundwater resulting from the application and leaching of salts. We hypothesized that the move to desalination would reverse prior problematic trends of salinization and provide a path to sustainable irrigated agriculture in Israel and similar environments. To investigate effects of desalination in Israel on the status of salinity trends, we evaluated citrus leaf sodium, chloride, and magnesium in the years since the onset of large-scale national desalination in 2008 and examined fresh produce in the country for sodium and magnesium. We found remarkable reversal of previous trends until 2006, when salinity was found to rise consistently, in the recent data showing decreases of 20, 34, and 30% for Na, Cl, and Mg, respectively. A tendency for Israeli produce to be high in concentrations of salts compared to international standards was also reversed following large-scale desalination. Sodium in Israeli fresh produce is no longer much higher than that expected in equivalent sources in the USA while magnesium is lower in Israel fruits and vegetables compared to USDA standards. We present these results and trends to support the argument that desalination can allow and promote sustainable irrigated agriculture in the world’s dry areas.
Keywords: seawater desalination; recycled wastewater; salinity; sodium; magnesium; chloride; citrus seawater desalination; recycled wastewater; salinity; sodium; magnesium; chloride; citrus

To explore trends in Na and Mg levels in citrus, we investigated a database summarizing ~13,500 citrus leaf samples collected by Israeli growers between 2008 and 2016 and sent to national laboratories for mineral analysis. Samples, tested for Na, Cl, and Mg concentrations, were typically taken in October–November from around four to six month old ‘diagnostic’ leaves from fruiting branches. List of varieties and orchard location included in the database can be found in Raveh (2013) [18]. The database was received from the Israeli Field Services Laboratories and included samples from commercial citrus orchards from all over the country; about 42% of the analyses came from orchards located along the coastal area of Israel, another 31% from the western Negev, and about 27% from the north of the country. For Mg analysis, leaves were washed in distilled water, dry ashed, extracted with HCl and analyzed by ICP (Spectrociros ccd, Spectro Analytical Instruments, Kleve, Germany). For Na and Cl analysis, the washed leaves were oven dried at 65 °C for 72 h, pulverized and analyzed using water extract [19]. The database included samples from all parts of the country. Since growers may not routinely request leaf Na and Cl analysis for orchards that appear healthy, it is likely that the mean values found over the years in the databases do not necessarily represent absolute mean nationwide values. Assuming that the samples represent more problematic areas than not, the values for all of the parameters tested are likely to be higher than actual averages. Leaf salt concentrations could also be influenced by differing or changing meteorological conditions. While actual annual rainfall in Israel fluctuates widely, during the period that the samples were taken the average annual rainfall was 8.6% below the long-term yearly average [20].
In order to assess a more current picture of the effects of desalination water on Israeli agriculture, 550 samples of 29 different fruits and vegetables (20–25 samples of each product) were acquired from all over Israel during 2017. The edible part (2 to 4 g) of each product was dry ashed (550 °C), extracted with HCl (18.5%), and analyzed for Na and Mg concentrations by atomic absorption spectrometer (Pinaacle 500; PerkinElmer, Waltham, MA, USA).
The Na and Mg in Israeli crops was compared to that found in the USDA National Nutrient Database for Standard Reference Food and Drug Administration [21].

Annual levels of Na, expressed as percentage of dry weight (% DW), in leaves of citrus trees have steadily and linearly decreased by some 20% from concentrations of over 0.18 to less than 0.14% dry weight since the introduction of large-scale seawater desalination in Israel in 2007 (Figure 1A). Leaf Cl followed this trend with an even stronger, nearly 35% decline, reducing from over 0.5% in 2008 to 0.34% in 2015 (Figure 1B). Magnesium in the diagnostic citrus leaves declined nearly 30% as well, from nearly 0.4% in 2008 to 0.28% (Figure 1C).
Absolute concentrations of Na in sampled fresh produce is shown in Figure 2A. None of the concentrations reported, even in the root and tuber crops tending to have relatively high levels, are considered dangerous or unhealthy for human consumption. Shown normalized to concentrations expected in the same products in the USA (Figure 2B), the data reveals that, of the 28 products tested, about a third are very similar to the standards of the USDA, a third significantly higher, and a third lower. The difference between this data and situation in 2017 to the parallel analysis published by [7] from 2012 is remarkable. In 2012 only 4 of 26 crops were found to have lower Na than US standards and more than half had concentrations of Na more than double the standards.
The move to desalination is expected to be particularly influential on Mg in agricultural systems [13,14]. This is supported by the data of Mg in edible products and its comparison with USA standards (Figure 3A,B). In 2017, Mg concentrations were found to be universally lower in Israeli produce compared to levels in each of the products in the United States found in the USDA database.
Similar to our previous macro-data case study for Israel showing trends over time [7], the strength of the current data set lies in its indication of large-scale trends and a consequential enabling to rethink big-picture paradigms. Each data set and its statistical consideration could admittedly be questioned, especially since control for uniqueness and balance in sampling is not feasible in such a study. That said, we find the trends and the clear and absolute reversal of the previous findings to be compelling. The fact that negative trends of increasing salinity for more than 20 years were completely reversed following the move to desalination for water supply in Israel is more than promising and indicates hope for sustainable irrigated agriculture beyond Israel and into additional dry areas. The concept and belief that desalination may be a viable strategy instead of irrigation with low quality water is not new [6,7,8,22], but the new large scale confirming evidence is truly reassuring.
Of course, desalination, as a water supply in general—and for irrigation purposes specifically—is not without issues needing consideration and treatment beyond those of soil and groundwater contamination and management of minerals. The environmental impact of desalination plants, particularly regarding energy consumption and disposal of brines, needs to be addressed in scenarios for long-term sustainability [23,24]. This we leave to engineers, designers, and decision makers but are hopeful in the realization that water scarcity today appears to be solvable and expected to become a non-issue as soon as accessible (affordable) sustainable energy will become available. The economics of desalination for irrigation must constantly be evaluated and will be a function of local price scheduling and markets and expected costs and benefits. Today, there is increasing evidence for the economic feasibility for agriculture to support desalination. Examples have recently been shown for Israel [25], California [26], Spain [27], and Australia [28].

The influx of large amounts of desalinated seawater into Israel’s water economy appear to have reversed trends of problematic buildup of salinity in agro-ecosystems caused by the combination of utilization of poor quality water for irrigation and adoption of methods for very efficient water delivery and use. Trends found by analyzing national macro data of minerals in citrus leaves and of salt concentrations in edible produce which showed increasing salinity from the 1990s until the end of the first decade of the 21st century were reversed during the country’s consequent and continuing post-desalination age. Prior fears that policy and practice in Israel were not sustainable due to the threat of salinity buildup and need to leach salts from agricultural fields have therefore been largely dissipated. We expect this to be of interest globally suggesting desalination as a component of sustainable models for irrigated agriculture in other dry regions. 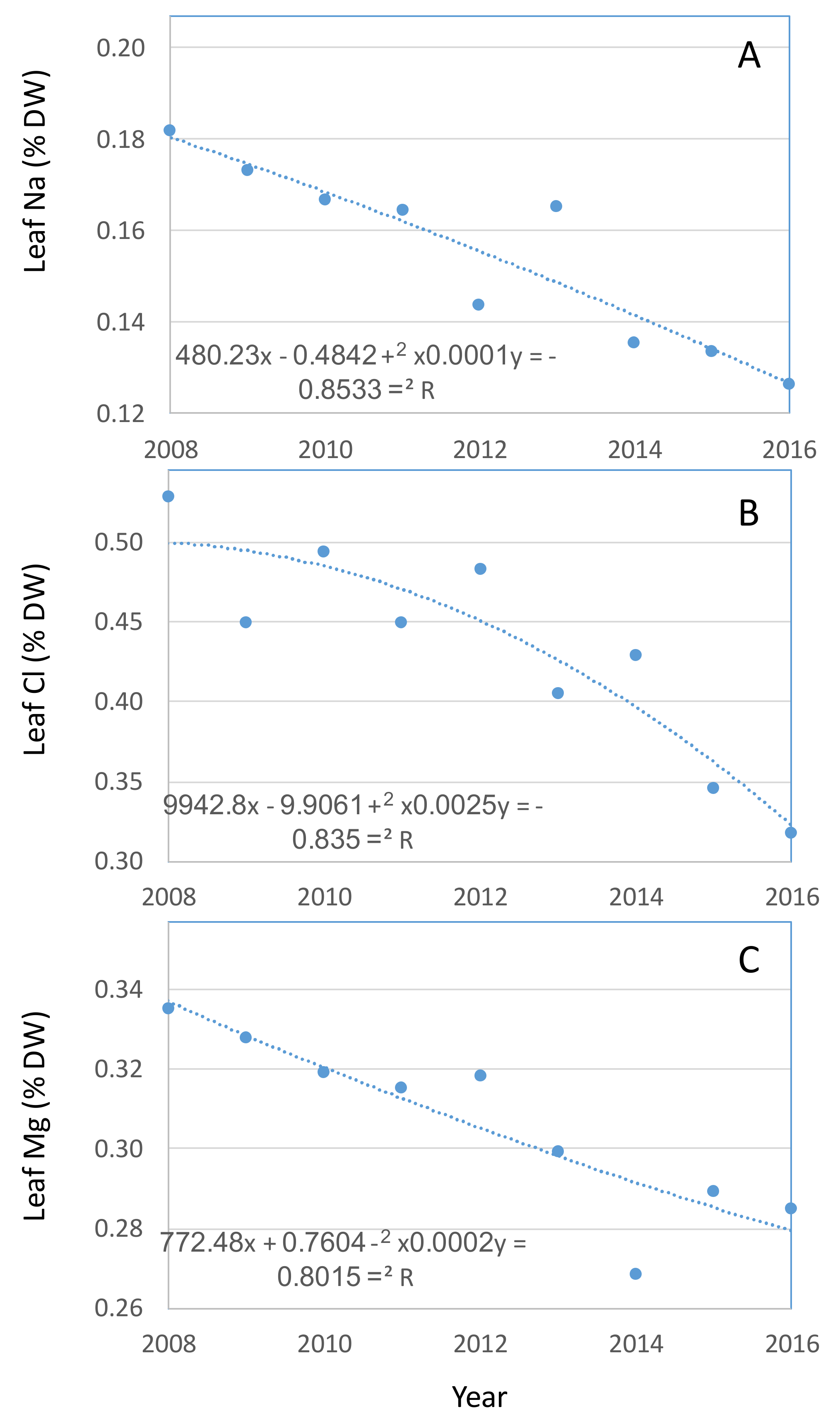 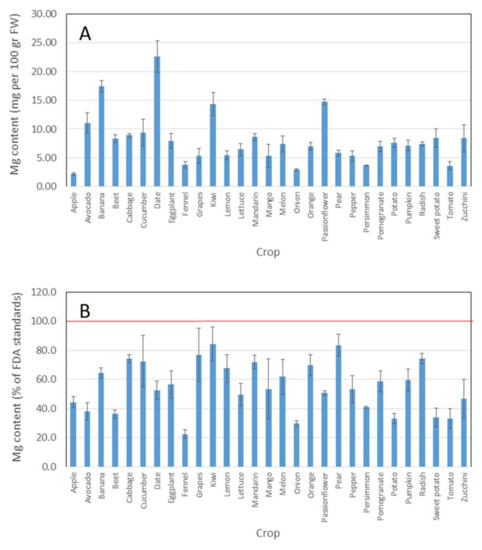 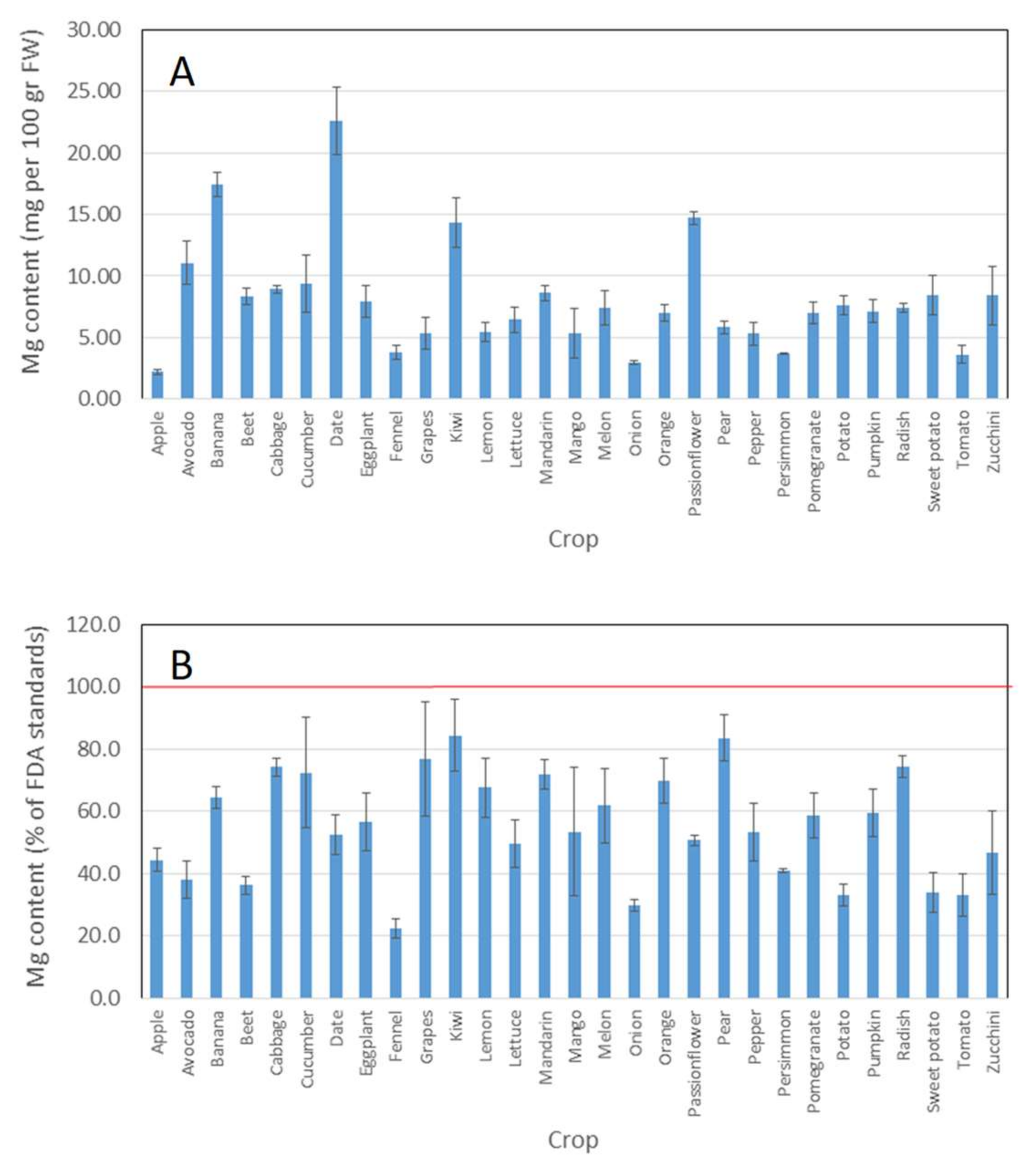