The Effects of Tillage and Straw Incorporation on Soil Organic Carbon Status, Rice Crop Productivity, and Sustainability in the Rice-Wheat Cropping System of Eastern China
Previous Article in Journal

The Economic Valuation of Change in the Quality of Rural Tourism Resources: Choice Experiment Approaches

Impacts of Land-Use and Land-Cover Changes on Water Yield: A Case Study in Jing-Jin-Ji, China

Knowing the impact of land-use and land-cover (LULC) changes on the distribution of water yield (WY) is essential for water resource management. Using the Integrated Valuation of Ecosystem Services and Tradeoffs (InVEST) model, we investigated the spatial-temporal variations of WY from 1990 to 2015 in China’s northern semi-arid region of Beijing–Tianjin–Hebei (Jing-Jin-Ji). We quantified the combined effects of LULC dynamics and climatic variation on WY. Furthermore, we identified the relative contribution of main LULC types to WY. For our study region, the built-up area increased by 35.66% (5380 km2) during the study period. In the meantime, cropland, grassland, and wetland decreased continuously. The expansion of built-up area and decline of vegetated land led to an increase of 1047 million m3 (5.1%) in total WY. The impacts of LULC changes on WY were mainly determined by the biophysical characteristics of LULC composition. Vegetated land has relatively lower WY coefficients due to higher rates of evapotranspiration and water infiltration. Built-up areas and bare land have higher WY coefficients as a result of their impermeable surface. The spatial-temporal analysis of WY with specification of WY coefficients by LULC types can facilitate integrated land-use planning and water resource management. View Full-Text
Keywords: water yield; land use and land cover changes; InVEST; Jing-Jin-Ji water yield; land use and land cover changes; InVEST; Jing-Jin-Ji
►▼ Show Figures 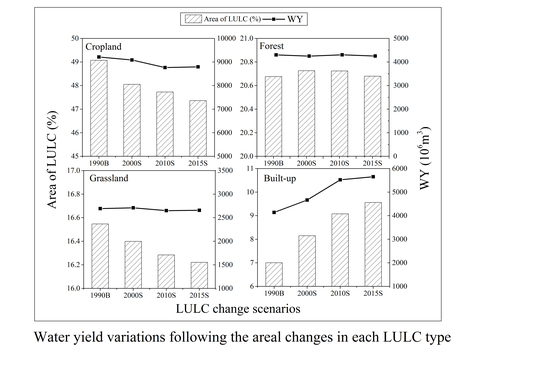