According to the book of “Agricultural Resources and Regional Planning in China” [39], the nation was divided into geographical farming zones comprised of county administrative districts by considering social, economic and basic agricultural production practices, as well as developmental direction and main production problems and solutions (Figure 1). These zones are designated as Northeast China (NEC), Huang-Huai-Hai Basin (HHHB), Ganxin Region (GX), Inner-Mongolia and zone along the Great Wall (IZG), Loess Plateau (LP), Southwest China (SWC), Middle-lower area of Yangtze Basin (MLYB), South China (SC) and Qinghai plus Tibet plateau (QT). Due to the cold climate in QT, sweet sorghum is rarely planted there [40]. QT was excluded, leaving eight zones to analyze.

In this study, a research literature review of sweet sorghum grown in the major farming regions was performed and the bulk of the work was divided into four categories: breeding techniques (variety selection, introduction and breeding, genetics, etc.), cultivation management (cultivation technology such as plant density, sowing date, fertilization, etc.), storage techniques (storage experiments in each region) and stress physiology (drought, salinity and alkalinity, heavy metals, etc.). All references were obtained from published Chinese and English research literature using “sweet sorghum” as keyword and limiting the search results to the most recent 15 years for searching of databases including “Web of Science,” “China Knowledge Resource Integrated (CNKI)” and the “WanFang Database.” The aforementioned indicators were used to compare and analyze the Degree of Technical Maturity (DTM) of sweet sorghum production in various regions. Each phase of sweet sorghum production is also affected by local economic development and climatic conditions.
A rapid analysis method designated as the “Sweet Sorghum Production Technique Maturity Model (SPTM)” in this study was used to evaluate the degree of technical maturity (DTM) of sweet sorghum production practices in various regions, as assessed using the aforementioned four indicators (breeding, cultivation, storage and stress-resistance). The calculation codes of SPTM are detailed in Supplementary Materials File 1. The proposed technique is based on the theory of Grey Relational Grade Analysis (GRGA), which is one of the essential components of grey systems theory formulated by Deng [41]. The weights of the studied indicators were defined according to the evaluation criteria and the DTM assessment determined in this study. Breeding technique, cultivation management and storage technique are the key indicators of sweet sorghum production. The weights of these three indicators were each assigned a value of 0.3 in this study. The weight of the indicator of stress physiology was assigned to be 0.1, due to sweet sorghum’s strong resistance to environmental stresses. Assuming that the DTM has a positive correlation with the numbers of discovered local research publications, the maximum value of each indicator across eight regions was regarded as the indicator’s theoretical optimum value. This method uses matrix calculation to quantify the data in different levels and transforms multiple responses into a single grey relational grade, so that the DTM could be comprehensively and fairly evaluated with a single dimensionless value. The DTM was assigned to one of four grades reflecting the technical level of sweet sorghum production, including very immature, immature, generally mature and mature, where the corresponding DTM ranged between [0, 0.25], [0.25, 0.50], [0.50, 0.75] and [0.75, 1.00], respectively.

Based on the results of the technical feasibility evaluation, three typical agricultural production regions, including NEC, HHHB and GX, were selected to represent the various soil and climate types and were subjected to comprehensive sustainability assessment of sweet sorghum production. In each of these three zones, typical study sites in the zone’s main planting area of sweet sorghum were selected according to the natural environmental conditions and planting characteristics [37]. The main conditions including position, climate and soil characteristics of the selected study sites are detailed in Table 1.
The sustainability assessment boundary began with soil preparation and included film mulching, basal fertilizer dressing, sowing, thinning out of seedlings, weeding, tiller removal, topdressing, pesticide application, irrigation, spikelet removal, harvesting, bundling, transportation, threshing to storage and marketing (Figure 2).
In order to make a comprehensive sustainability assessment, the National Energy R&D Center for Non-food Biomass (NECB) obtained a total of 481 questionnaires based on face-to-face interviews with farmers in NEC (Morin Dawa Banner), HHHB (Wudi County and Wendeng County) and GX (Wuyuan County) during a four-year sustainability analysis of sweet sorghum production supported by National Energy Administration of China [33,35].
Multiple evaluation factors of sustainability assessment included energy efficiency, environmental effects, economic benefit, etc., as described below.
(1) Energy output
In this study, the energy efficiency evaluation was based on two indices. One was the energy input-output ratio of sweet sorghum production, which was defined as the energy contained in both the stalk, as the main product and the grain, as the by-product, divided by the energy consumed in the cultivation and transportation of the sweet sorghum. Considering the scarcity of land resources in China, the available land area is of utmost importance for calculating sweet sorghum energy production. The other important indicator is net energy output per unit of land area, which was defined as the energy contained in the stalk and the grain minus the energy consumed in the cultivation and transportation of the sweet sorghum.
(2) Greenhouse gas emissions
Reducing the greenhouse gas emissions (GHGs) was the original intent behind development of biofuels [48]. Notably, the sweet sorghum cultivation phase is the main source of greenhouse gas emissions in bioethanol life cycle, including the use of diesel fuel and electricity consumption to conduct irrigation, as well as the production and application of nitrogen fertilizer [22]. The GHGs, as the second indicator, consist of the emissions generated during the growth and transportation of sorghum straw per kilogram. The economic value approach was applied to allocate the percentages of the emissions to the stalks as main products and to grains as by-products in the sweet sorghum cultivation phase.
(3) Economic benefit
The economic profitability of the farmers directly influences whether they plant bioenergy crops instead of conventional food crops. Therefore, assessment of profitability is crucial to the development of bioenergy crops for production of liquid biofuels [1]. Farmers’ incomes correlate directly to planting costs, biomass yield and market price of sweet sorghum [35]. In this study, the economic input-output ratio, as another indicator, was defined as the economic output of both the stalks as main products and grain as by-products divided by the cost input of sweet sorghum’s production and transportation. The net economic output is the difference between the economic output and input.
(4) Nitrogen fertilizer
Fertilizer-leaching pollution, especially of nitrogen and phosphorus fertilizers applied during agricultural production, is both detrimental to ecosystems and to drinking water quality [4]. This study focuses on the N fertilizer, which had the strongest influence on sustainable development. N fertilizer generation consumes much energy and causes a vast quantity of GHGs that increase in direct proportion with N application. The N fertilizer use efficiency [60], as an indicator, was defined as the net energy produced per kg of N fertilizer application. Cultivation practices of sweet sorghum are relatively simple in China, with little application of either pesticides or irrigation [35], thus, these factors were ignored in this study.
Assuming that the weights of the effects of the above indicators on the sustainability of sweet sorghum production are equal, we took the maximum value of each indicator (except GHGs) as 100 for the degree of sustainability, with the others calculated in proportion. As for the greenhouse gas emissions, the minimum is the basal value, defined as 100 and the value of other emissions is calculated using the formula:
y = (other emission−minimum emission)/minimum emission × 100 − 100

3.1. The Technical Feasibility of Sweet Sorghum Production in China

As an ideal solution to solve dual challenges of energy and environmental security, numerous new conversion technologies have been developed for bioethanol production over the past two decades [65]. However, few studies have been conducted to evaluate the cost of bioethanol conversion, which could be considered a crucial factor for the development of the bioethanol industry [66]. Furthermore, logistical challenges that have led to poor financial return have also been reported as main barriers to using sweet sorghum as bioethanol feedstock [1]. Thus, two sensitivity analyses were conducted to identify the effects of bioethanol conversion and biomass logistics costs on the prospective economic profitability in the three selected regions analyzed in this study. Based on the theoretical calculation (Equations (5)–(8)), the initial values of inputs for bioethanol conversion were 2884.7 USD/ha, 3085.3 USD/ha and 2552.8 USD/ha in NEC, HHHB and GX, respectively. Notably, a similar ranking order was seen for biomass logistics inputs as for bioethanol conversion, with the ranking of locations as NEC (3948.0 USD/ha) > HHHB (3734.4 USD/ha) > GX (3042.6 USD/ha). In order to evaluate economic viability, the initial values of bioethanol conversion inputs (Figure 7a) or biomass logistics inputs (Figure 7b) were decreased by increments of 10% in three selected regions. Meanwhile, the other parameters remained unchanged.
Because of the cost structure presented earlier in Figure 6, it is obvious that proportionate biomass logistics cost reduction would lead to better prospective economic profitability than would proportionate reduction of bioethanol conversion cost. Ultimately, bioethanol production using sweet sorghum could achieve profitability in all of the selected areas when cost reduction of biomass logistics reached 60% (Figure 7a). In this case, HHHB would achieve the highest average net economic output (264.6 USD/ha), followed by GX (234.0 USD/ha), with the lowest value for NEC (83.0 USD/ha). In addition, net economic output would be ranked in the order of HHHB (1012.1 USD/ha) > NEC (872.6 USD/ha) > GX (845.5 USD/ha) when cost reduction of bioethanol logistics reached 80%. Nonetheless, these results still indicate that this process is far from economically feasible using the current biomass conversion processes in the selected regions, unless biomass conversion cost reductions reached 80% (Figure 7b). If such a large cost saving could be realized, the net economic outputs would be 490.38 USD/ha, 453.63 USD/ha and 21.94 USD/ha in HHHB, GX and NEC, respectively.

Sweet sorghum is becoming one of the most promising bioenergy crops in China. In this study, the technical feasibility of sweet sorghum production was assessed in eight agricultural regions in China using our high-throughput SPTM model. Next, comprehensive assessment of sustainability of sweet sorghum production (including net economic output, economic input-output ratio, net energy output, energy input-output ratio, greenhouse gas emissions and nitrogen use efficiency) was conducted for three selected typical agricultural regions, NEC, HHHB and GX. Results showed that the degree of technical maturity (DTM) of bioethanol production was relatively high in NEC (0.8066), followed by the value of GX (0.7531) and next by HHHB (0.6594); the DTM values of the other five regions were very immature and possessed degrees less than 0.5. From an economic point of view, bioethanol production from sweet sorghum is not feasible at China’s current agricultural logistics and biofuel conversion stages of development. Thus, more efforts are needed to improve biomass logistics such as the dedicated equipment for mechanization, transport distance from depot, diesel price, transport distance from field side and baler rate to decrease total costs. Meanwhile, the development of new bioethanol production technologies also needs to be sped up.

The following are available online at www.mdpi.com/xxx/link, Table S1: Indicators of the sustainability of sweet sorghum production of typical study sites in Northeast China, Huang-Huai-Hai Basin, and Ganxin Region.

This work was supported by the National Natural Science Foundation (31470555).

X.Y. wrote the paper; X.Y. and G.X. conceived and designed this research; X.Y., H.L. and M.L. analyzed the data; L.R. contributed to materials. 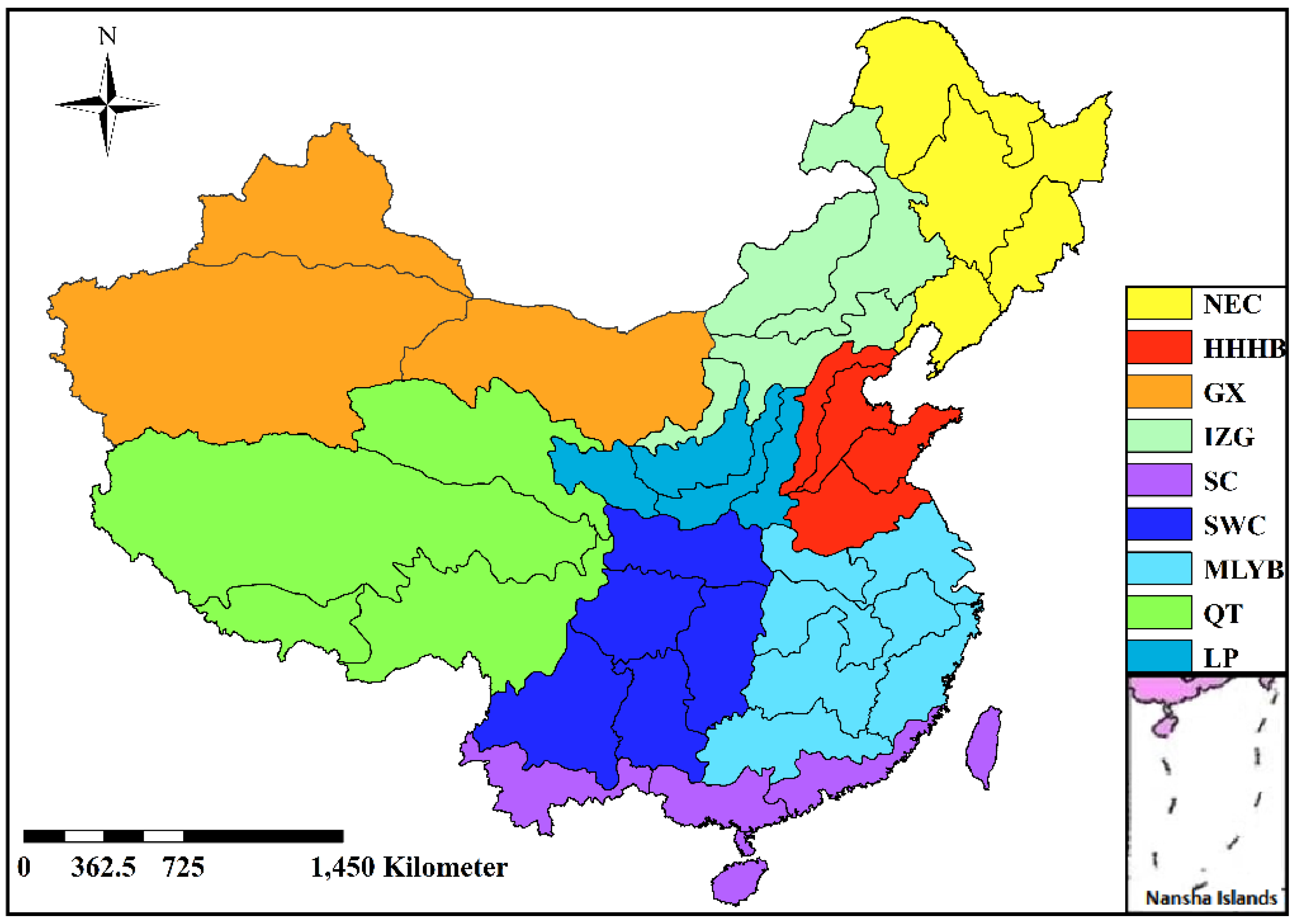 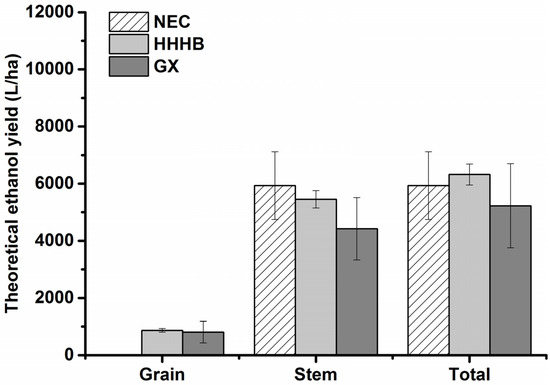 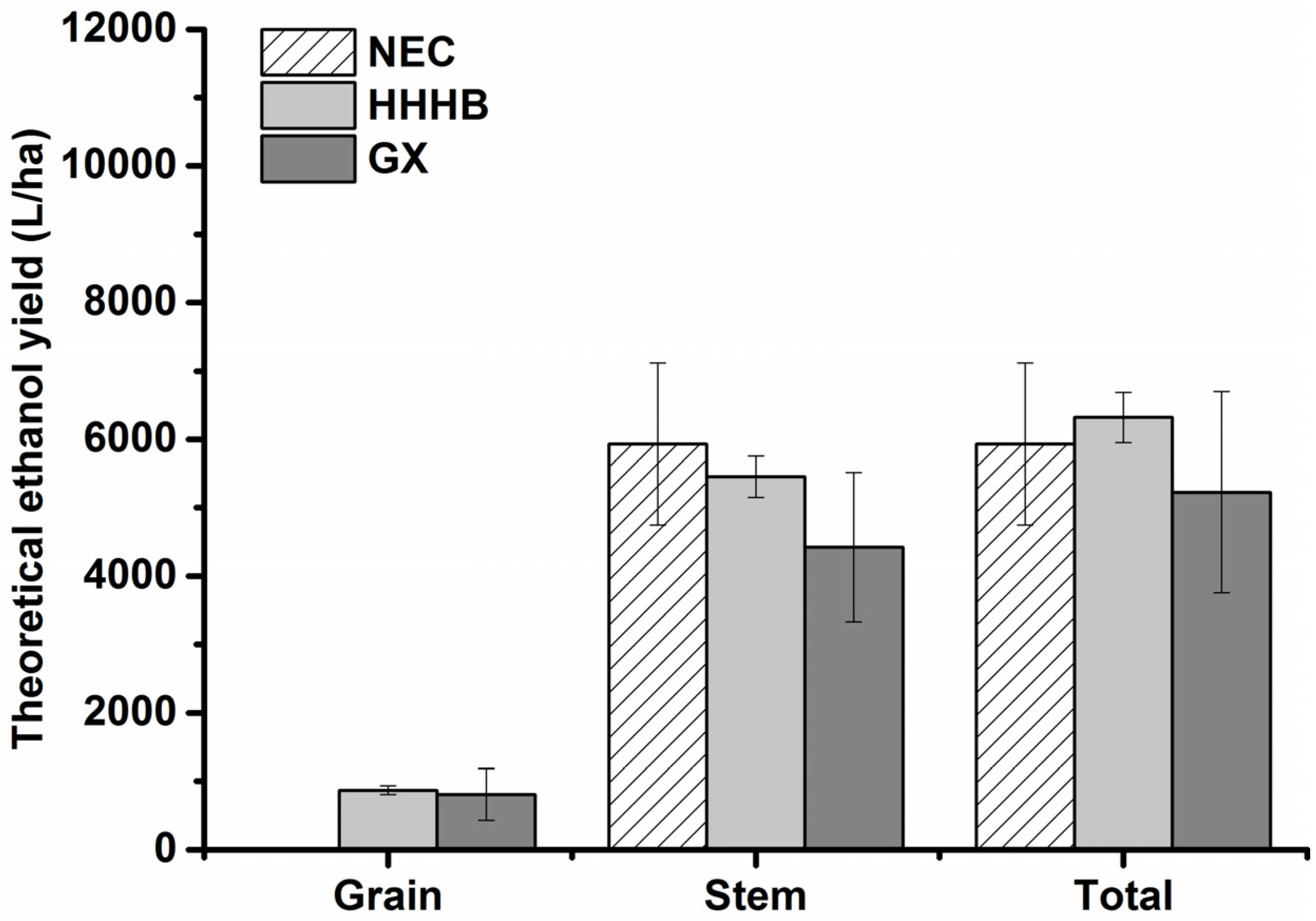