Photovoltaic and Hydrogen Plant Integrated with a Gas Heat Pump for Greenhouse Heating: A Mathematical Study
Previous Article in Journal

Urban trees are more about people than trees. Urban trees programs need public support and engagement, from the intentions to support to implement actions in supporting the programs. Built upon the theory of planned behavior and Structural Equation Modeling (SEM), this study uses Beijing as a case study to investigate how subjective norm (cognition of urban trees), attitude (benefits residents’ believe urban trees can provide), and perceived behavioral control (the believed ability of what residents can do) affect intention and its transformation into implemented of supporting action. A total of 800 residents were interviewed in 2016 and asked about their opinion of neighborhood trees, park trees, and historical trees, and analyzed, respectively. The results show that subjective norm has a significant positive effect on intentions pertaining to historical and neighborhood trees. Attitudes influence intentions, but its overall influence is much lower than that of the subjective norm, indicating that residents are more likely to be influenced by external factors. The perceived behavioral control has the strongest effect among the three, suggesting the importance of public participation in strengthening intention. The transformation from intention to behavior seems relatively small, especially regarding neighborhood trees, suggesting that perceptions and participation need to be strengthened. View Full-Text
Keywords: residents’ cognition; perception; structural equation modeling; historical trees; Beijing residents’ cognition; perception; structural equation modeling; historical trees; Beijing
►▼ Show Figures 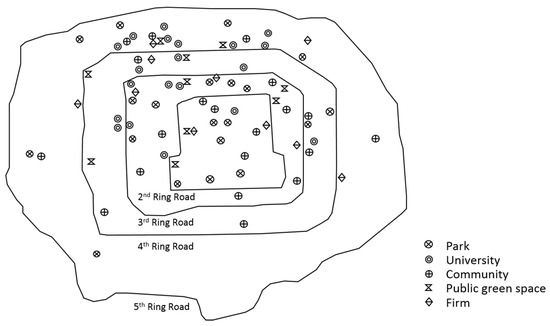