Does the Saudi Population Have Sufficient Awareness of Vitiligo in Southwest Saudi Arabia? A Cross-Sectional Survey, 2022
Previous Article in Journal

The Use of Artificial Intelligence in Medical Imaging: A Nationwide Pilot Survey of Trainees in Saudi Arabia

Global Prevalence and Associated Clinical Markers of Thrombocytopenia in People Living with HIV: Evidence from Meta-Analysis

2.1. Search Techniques and Criteria for Selection

This meta-analysis was conducted as per the guidelines of Preferred Reporting Items for Systematic Reviews and Meta-Analyses (PRISMA) [11,12]. All authors independently searched on databases PubMed, Embase, and Cochrane. A data extraction template was used to accumulate the information from each qualified study. We extracted the following data: study creator and nation, period of study, mean age, sample size, sample size for female and male, database utilized, reported number of HIV patients with thrombocytopenia, gender-wise segregation of male or female HIV patients affected by thrombocytopenia, and association of CD4+ T level for the development of thrombocytopenia. Each selected study’s data was independently abstracted by each author; if any disagreement was noted in respect of the data, then it was resolved by collective discussion. In, addition, the PRISMA checklist was used to present the findings of this systematic review and meta-analysis (refer to supplementary Table S1; Search strategy Table S2) [13]. For the study selection, we followed participants, intervention, comparators, outcomes, and study design (PICOS) criteria for the study selection (Table 1).

A random effects analysis model was used to compute pooled prevalence rates of thrombocytopenia in HIV patients along with their 95% confidence intervals (CI). We used the recommended Tukey-Freeman arcsine transformed proportion and variance estimates for meta-analytic calculations of prevalence data, with the result presented as a forest plot [14]. Heterogeneity was assessed using the Higgins inconsistency index (I2), and if I2 > 50% it was considered substantial heterogeneity [15]. The odds of thrombocytopenia in HIV patients with CD4+ T levels at CD4+ T < 200 cells/μL compared to HIV patients with CD4+ T > 200 cells/μL were also assessed. A sensitivity analysis was used to investigate the effect of each study on the pooled prevalence by excluding each study in turn. Egger’s test and Begg’s test were used to assess publication bias [16]. All statistical analyses were computed using Stata (version 16.0; Stata Corporation, College Station, TX, USA).

The study’s quality was evaluated by using “The Joanna Briggs Institute Prevalence Critical Appraisal Tool”, which is a validated critical appraisal tool for systematic reviews addressing questions of prevalence [17].

3.1. Thrombocytopenia and Its Associated Clinical Markers in Adults Living with HIV

4.2. Interpretation of the Findings

Routine assessment for thrombocytopenia along with evaluation of CD4+ T level in subjects living with HIV should be performed to optimize clinical management.

This meta-analysis based on real-world evidence suggests that a majority of HIV patients may have a vulnerability of thrombocytopenia, which may be because of multifactorial reasons.

The physician should critically evaluate the associated factors such as age, CD4+ T level, and treatment modality which may enhance the risk of thrombocytopenia in HIV patients. 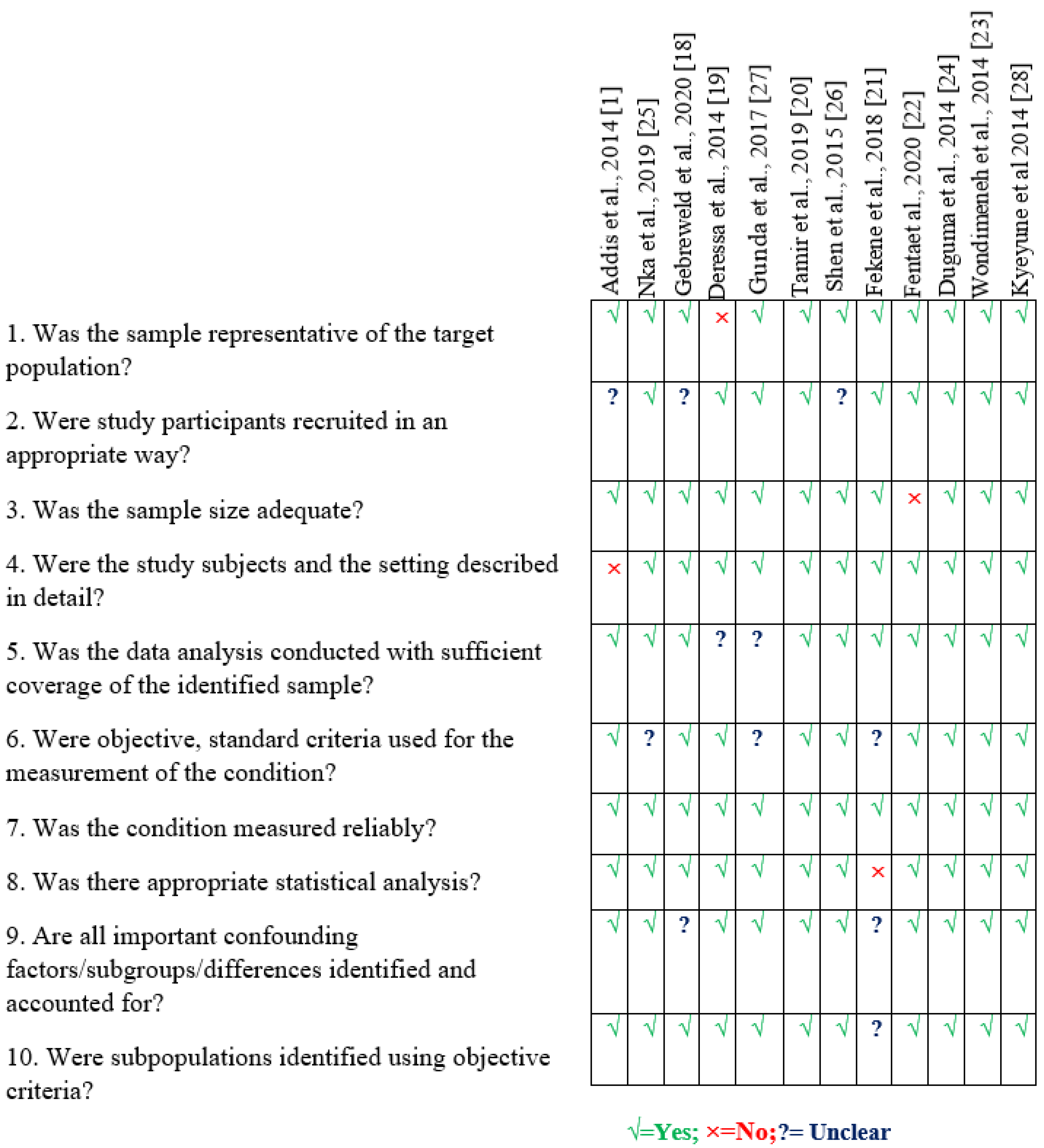