:
I list a summary of the major clinical observations of SVIN in patients with total unilateral vestibular loss (TUVL) and show how basic results from neurophysiology can explain these clinical observations. The account integrates results from single neuron recordings of identified semicircular canal and otolith afferent neurons in guinea pigs in response to low frequency skull vibration with evidence of the eye movement response in cats to selective semicircular canal stimulation (both individual and combined) and a simple model of nystagmus generation to show how these results explain most of the major characteristics of SVIN.
Keywords:
vestibular; otolith; utricular; saccular; labyrinth; VEMP; semicircular canal

Skull vibration induced nystagmus (SVIN) is a dramatic clinical observation—if a vibrator is applied to either mastoid of a patient with a total unilateral vestibular loss (TUVL) and switched on at a frequency of 100 Hz and at moderate intensity (about the strength a body massager) the patient immediately has a nystagmus, mainly horizontal, with the clinically obvious quick phases (QPs) beating away from the lesioned ear [1]. The nystagmus ceases at the offset of the vibration with no afternystagmus. Video recordings show the nystagmus is comprised of slow phase eye velocity (SPV) deviations away from the healthy ear, interspersed with oppositely directed quick return phases (QPs) away from the lesioned ear. The SPV and QP are driven by different neural mechanisms [2]. The quick phases are easily detectable by the clinician at the bedside (with Frenzel glasses) but quantifying the slow phase eye velocity requires three dimensional recordings (horizontal, vertical, and torsional) of the eye movement by scleral search coils or video as shown in Figure 1 from [1].
With SVIN, the startling result is that the direction of the nystagmus is the same for stimulation of either mastoid! As a control: the same procedure in healthy subjects does not elicit such a consistent nystagmus with slow phase eye velocity above 2.5 deg/s [1]. The first question is what vestibular receptors are being activated by mastoid vibration, and the physiological evidence for that is summarized below [3,4]. The second question is why such activation results in nystagmus and a simple, evidence-based, “imbalance model” of nystagmus generation is presented. The third question is to explain the exact direction of the slow phase eye velocity component of the nystagmus and to do this I refer to the results of selective stimulation of nerves from single canals (or combination of canal nerves [5]). These data are used to explain the results from 3-D eye movement measurement of SVIN in different categories of human testing. Many characteristics of SVIN have been documented by Dumas and his colleagues [1,6,7,8] and the main features are summarized in Table 1.

Recordings from single vestibular afferents in guinea pigs have shown that low frequency skull vibration (100 Hz) is an effective stimulus activating those semicircular canal and otolith neurons with irregular resting discharge (Figure 2). These afferents are called “irregular” because in these neurons the interval between action potentials in the absence of stimulation—the resting discharge—is variable and thus termed “irregular”. These irregular afferents innervate the amphora shaped type I receptors at the crest of the crista or at the striola of the otolithic maculae [9,10] and these afferents are activated with high sensitivity by 100 Hz vibration. In contrast other afferent neurons, synapsing predominantly on type II receptors on the slopes of the crista or in the extrastriolar area of the otolithic maculae, show a regular resting discharge but have a very poor or absent response to vibration at clinically safe intensities [4].
These activated irregular neurons typically have low resting rates and some even have zero resting rate [11,12,13]. When activated by 100Hz vibration, the irregular canal afferents are activated and at 100Hz, fire one action potential per cycle (Figure 2B,C), synchronized with the stimulating frequency. This synchronization shows that each cycle of the vibration is the effective stimulus for the receptor and afferent, and it explains why the SPV of SVIN depends on vibration frequency (at least up to 100 Hz). A low frequency stimulus (e.g., 30 Hz) only elicits a modest phase-locked neural firing rate (30 spikes/s) whereas a high frequency stimulus (100 Hz) elicits a much higher firing rate (100 spikes/s). Increasing stimulus frequency above about 100 Hz is progressively less effective (Figure 2D), probably because the stimulus intensity at clinically acceptable stimulus levels is not sufficient to activate the receptors.
Phase-locking of canal neurons to the vibration stimulus explains the abrupt stimulus-locked onset and offset of SVIN without any afternystagmus. In TUVL patients the unilateral 100 Hz mastoid vibration stimulus will cause the canal and otolith neurons to be activated at stimulus onset and show phase locking—firing one spike per cycle of the vibration stimulus [3]. A 100 Hz vibration stimulus causes an immediate large increase in primary neuronal firing rate which in TUVL patients would quickly drive the eyes away from the healthy side (slow phase) interspersed with QPs away from the affected ear. At stimulus offset there is a very abrupt return to resting activity [3] which causes an abrupt restoration of average VN neural activity and so an abrupt cessation of eye movements.

Based on physiological results, both neural and oculomotor, I propose the following simplified “imbalance principle” of nystagmus generation.

4. Clinical Value and Interpretation of SVIN

If a patient shows SVIN which is the same direction for 100 Hz vibration stimulation of both mastoids, it indicates that there is probably an asymmetry in semicircular canal function between the two labyrinths. The direction of the QPs indicates which labyrinth has the smaller response, since the nystagmus QPs beat away from the side with the smaller response. However, that nystagmus direction alone is ambiguous—the QPs beat away from the weaker side but that can happen because the VN activity of one side is reduced compared to the other or because the VN activity of one side is enhanced compared to the other. In both cases the nystagmus will beat away from the weaker side. Clinically these two conditions are diametrically opposed—in one case there is reduced function of one ear and in the other there is enhanced function of the opposite ear. This ambiguity is an especially pronounced problem in MD, where there can be either reduced or enhanced function even during a vertigo attack and the level of VN asymmetry probably varies during the vertigo attack [21,22] since the direction of the spontaneous nystagmus may reverse. Proper diagnostic interpretation of SVIN requires other clinical evidence in addition to the direction of QPs—e.g., evidence which independently indicates which is the affected side having lower function or enhanced function (e.g., spontaneous nystagmus, functional vestibular tests such as calorics or video head impulse testing, or low frequency hearing loss).

What is still unclear is the exact mechanism at the level of the receptor hair cell by which low frequency vibration deflects the stereocilia of the canal receptors sufficiently to activate them [26]. The vibration stimulus is a linear acceleration applied to the skull which may generate small fluid displacements which at frequencies of 100 Hz and below is sufficient to deflect the stereocilia of semicircular canal receptors. However, as the frequency is increased above 100 Hz the amplitude of the skull displacement decreases and so the fluid displacement will also decrease, and by 500 Hz the deflection of the stereocilia of the receptor hair cell is probably sub-threshold, at least in response to linear acceleration amplitudes which can be delivered with clinical safety to human subjects and patients. Canal occlusion probably also causes a similar reduction in fluid displacement.
In this paper I have focused on patients with known complete unilateral loss because it is in many ways the simplest case. Although, of course, many patients have partial loss of labyrinthine function or unknown problems and they can present with complex patterns of response to SVIN [1]. This paper shows how the responses of such patients with partial loss might be understood by considering the basic physiological evidence in relation to the “imbalance principle”.
The neural imbalance principle of nystagmus can also explain why vibration of neck muscles can induce nystagmus [27] since there are projections from neck muscle receptors to the vestibular nuclei [28,29,30] and so unilateral vibration of neck muscle can also produce an imbalance in average neural activity between VN in TUVL patients (and even healthy subjects), and so nystagmus [27].
Low frequency SVIN is a strong stimulus for irregular otolithic afferents [11] so it is possible (even likely) that there is otolithic contribution to the SVIN response. Otolith afferents converge on semicircular canal neurons in the vestibular nuclei [31,32] and otolithic stimulation of human observers can modulate the amplitude of the horizontal component of canal-induced nystagmus [33]. However there is a dissociation between clinical otolithic tests (such as VEMPs) and SVIN [34] indicating that while otolithic stimulation may be able to modulate SVIN, it is not (usually) the main cause of the SVIN.

Much of the work reported here has been supported by the Garnett Passe and Rodney Williams Memorial Foundation, and I am very grateful for their continued support of my research over many years. I thank Ann Burgess and Leigh McGarvie for their help in preparing this paper. 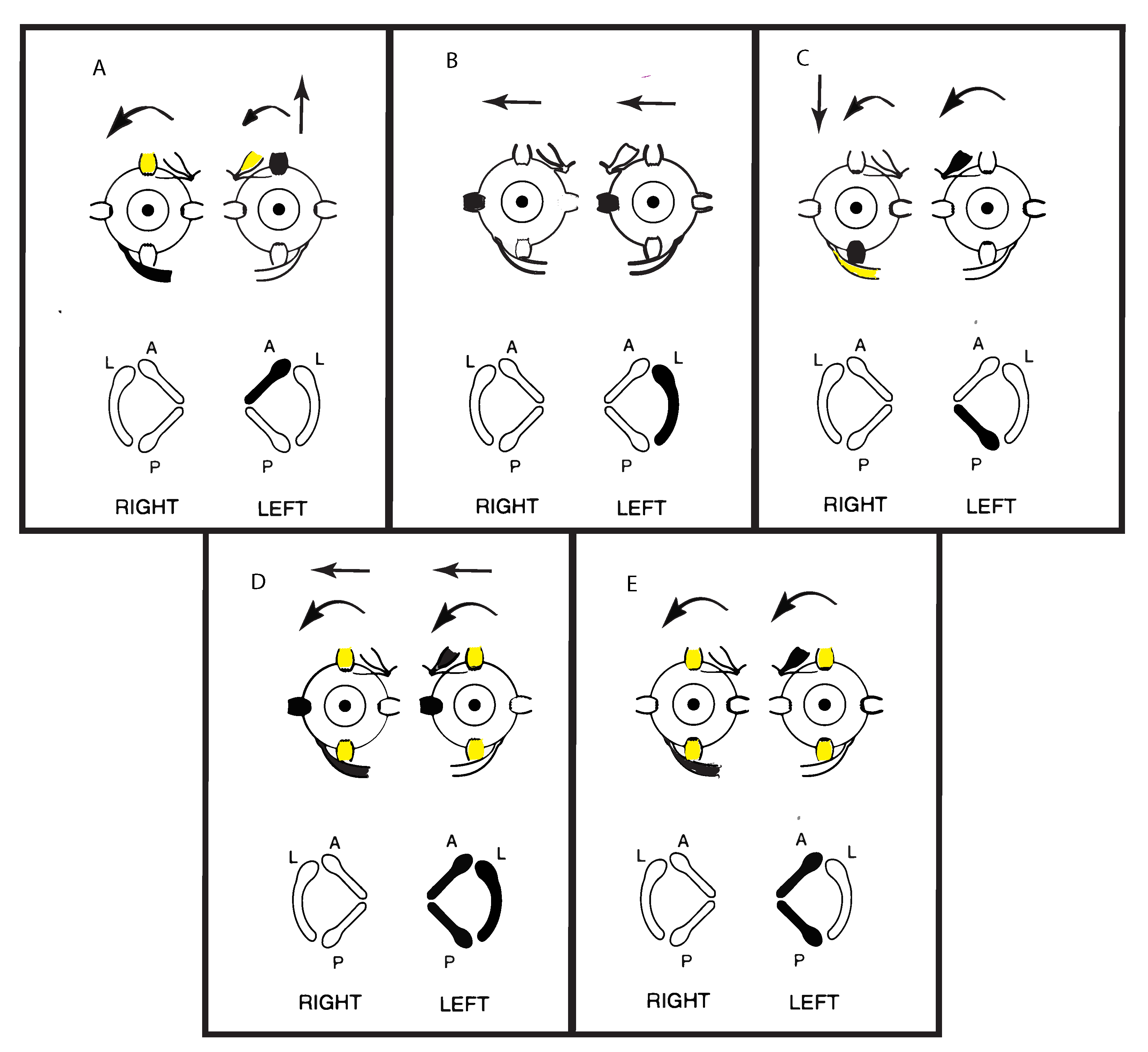