This study analyzed a prototype of a pouch cell containing silicon alloy anodes with the potential to significantly increase the energy density, resulting in improved autonomy for electric vehicles. An electrical characterization campaign was performed, resulting in three main observations. Firstly, measurements showed a high energy density, although a high lower cutoff voltage (3.0 V) was used due to the prototypical nature of the cells. Further optimization would allow a decrease of the lower cutoff voltage, resulting in an even higher energy density. Secondly, a large open-circuit voltage hysteresis was observed, increasing the complexity for equivalent circuit models. Thirdly, ballooning of the pouch cell was observed, most likely caused by gas formation. This leads to a loss of active surface area, significantly reducing the cell’s capacity. This third observation was more thoroughly investigated by 3D computed tomography, which showed mechanical deformation of the layers. An extensive literature review revealed that the addition of fluoroethylene carbonate (FEC) to the electrolyte enhances the cycling stability of silicon alloy batteries but leads to the production of CO as a side reaction. Furthermore, the usage of external pressure was proposed and validated as a methodology to reduce the production of CO while improving the cells’ performance. View Full-Text
Keywords: silicon alloy; nickel-rich NMC; high energy density silicon alloy; nickel-rich NMC; high energy density
►▼ Show Figures 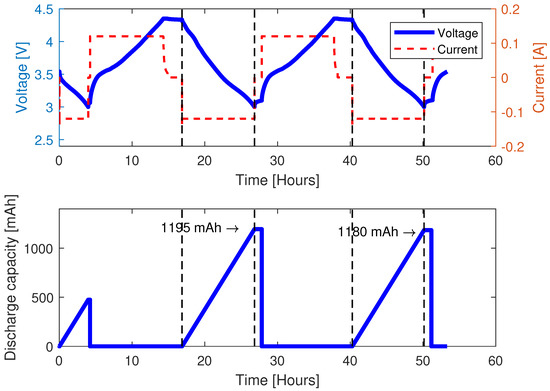