:
The charging safety of electric vehicles is an area of focus in the electric automobile industry. For the purpose of ensuring safety, charging electric vehicles as soon as possible is a goal pursued by the public. In order to ensure the safety of electric vehicles during fast charging and to reduce the cycle life decay of the battery, a simplified multi-particle lithium-ion battery model is proposed, based on the pseudo two-dimensional (P2D) model. The model was developed by considering heterogeneous electrochemical reactions in the negative electrode area. The Butler–Volmer (BV) kinetic equation and the distribution of the pore wall flux in the negative electrode is approximated by the quasi-linear approximation method. Furthermore, this paper also analyzes the conditions of lithium precipitation from the negative electrode of a lithium-ion battery in the case of high charging rates, which has a certain reference significance for fast-charging control applications. The experimental and simulation results show that the model has a high simulation accuracy and can reflect the heterogeneity of electrochemical reactions in the negative electrode of the battery. The model can be adapted to fast-charging control applications.
Keywords:
lithium-ion battery; physical model simplification; safe fast-charging; heterogeneous pore wall flux

In order to deal with the global energy crisis, countries all over the world began to seek cleaner and more sustainable new energy sources. As a clean and sustainable energy, electric energy has been widely studied in the field of science and technology. At the same time, the electric vehicle industry also accelerated development. The battery is undoubtedly an important part of an electric vehicle. In order to connect the micro-changes inside the battery with the macro-changes outside the battery, it is necessary to build a battery model from the physical structure and the physical and electrochemical characteristics of the battery according to the micro-behavior of the battery during the charging and discharging process. Compared with the battery equivalent circuit model, the construction of battery physical model does not depend on a large number of experiments, and the physical meaning of battery model parameters is clear [1]. In recent years, more and more attention has been paid to battery models, which have been applied in battery state estimations and the in analysis of battery aging mechanisms.
The physical battery model is the P2D model studied by Doyle and Newman [2], which is based on porous electrode theory and concentrated solution theory. The model includes one dimension of electrode thickness direction and a pseudo second dimension of the electrode particle sphere radius direction. The P2D model offers a high simulation accuracy and can describe battery characteristics very accurately, but its calculation process is complex and its simulation time is long. Therefore, the P2D model is not directly used in practical engineering. Instead, a simplified model based on the P2D model is used. These simplified models can not only ensure simulation accuracy, but also greatly reduce the amount of calculation. Among the simplified models, the simplest is the single-particle (SP) battery model proposed by Haran [3]. In this model, a single particle is used to replace the whole electrode, and it is thought that all the electrochemical reactions and changes of liquid concentration in the cell are uniform. The SP model ignores the influence of the micro- and liquid dynamics process of the battery, which greatly improves the simulation speed of the model compared to that of the P2D model. However, the simulation accuracy of the SP model is slightly insufficient, and it can only be applied in particular contexts, such as low rate current and thin electrode. Beyond the SP model, there are the extended single-particle (ESP) battery model [4] and the multi-particle (MP) battery model [5]. Compared with the SP model, the ESP model takes into account the influence of liquid dynamics on the battery. Compared with SP model and ESP model, MP model considers the heterogeneity of electrochemical reaction in the battery.
In order to analyze the safety of the battery during fast charging and the cycle life decay, a simplified multi-particle (SMP) battery model is proposed based on the P2D battery model. The SMP model is used to analyze the lithium precipitation and aging of the negative electrode during fast charging. In the SMP model, the negative electrode is equivalent to four electrode characteristic particles in the direction of electrode thickness to reflect the inhomogeneity of the electrode. Because the SMP model focuses on the heterogeneity of the electrochemical reaction and the lithium precipitation of the battery’s negative electrode, In SMP model, all active particles in the electrode are approximately represented by one particle to reduce the complexity of the model. Compared with other simplified models, such as the SP model and the MP model, the SMP model can not only characterize the heterogeneity of the battery’s negative electrode electrochemical reaction, but also offers the advantage of high simulation accuracy. The SMP model is more suitable for use in on-board BMS to ensure safe fast charging without lithium precipitation in electric vehicles.
The nomenclature of the symbols used in this paper is shown in Table 1.
The core aim of this study was to solve the heterogeneous hole wall flow of the negative electrode. Secondly, the LiCoO2 battery was used as the object to simulate the model. At the same time, conditions for the control of the precipitation of negative lithium in a lithium-ion battery in case of a high rate of charging are proposed. The simulation results show that a high simulation accuracy can be obtained from the SMP model when charging at a high rate.

The open circuit potential function of the LiCoO2 battery is obtained by reference [10].
Positive electrode:
Negative electrode:
In the SMP model, the lithium insertion rate at each characteristic particle is:
Next, the surface electromotive force of the characteristic particle can be expressed as:
Reference [10] obtained the calculation equation of electrolyte concentration difference overpotential as:

The parameters and equations of the negative electrode are expressed by the following matrix: where , are the coefficient matrices of the linearized BV equation, and is the solid-phase matrix and the liquid-phase potential matrix, respectively. Here and are given, and the solid phase matrix is similar to the liquid phase, so they are not given here.
, . After obtaining the above five equations, the pore wall flux can be derived: where , is the reference potential.
Combining Equations (5) and (24) together, the value of the reference potential can be obtained:
Finally, the pore wall flux can be expressed as:

4. The Update of Ion Concentration

The battery experiment was carried out on a Neware battery test system at 25 °C. The experimental sample was a button-shaped LiCoO2 battery (40 mAh). The negative electrode material of the battery was graphite. All the simulation experiments in this paper were programmed on MATLAB. The calculation flowchart of the SMP model is shown in Figure 3. The simulation parameters of the model are given in Table 3.

The SMP model was simulated with 0.5C, 1C, 2C and 3C current rates. The terminal voltage fitting results under the four charging currents are shown in Figure 4. It can be seen from the simulation results that the simulation results of SMP model can fit the experimental results well compared with the experimental values under four current conditions. The root mean square error (RMSE) was within 23.9 mV.

In this paper, in order to ensure the safety of electric vehicles during fast charging and to reduce the cycle life decay of the battery, a simplified multi-particle lithium-ion battery model is proposed based on the pseudo two-dimensional (P2D) model. The model was developed by considering the heterogeneous electrochemical reaction in the negative electrode area. The Butler–Volmer (BV) kinetic equation and the distribution of the pore wall flux in the negative electrode was approximated by the quasi-linear approximation method. The experimental and simulation results show that the model has a high simulation accuracy and can reflect the non-uniformity of electrochemical reactions in the negative electrode of the battery. The root mean square error (RMSE) of the model is within 28.2 mV for 1C to 3C current rates charging conditions. The model can be adapted to fast-charging control applications. 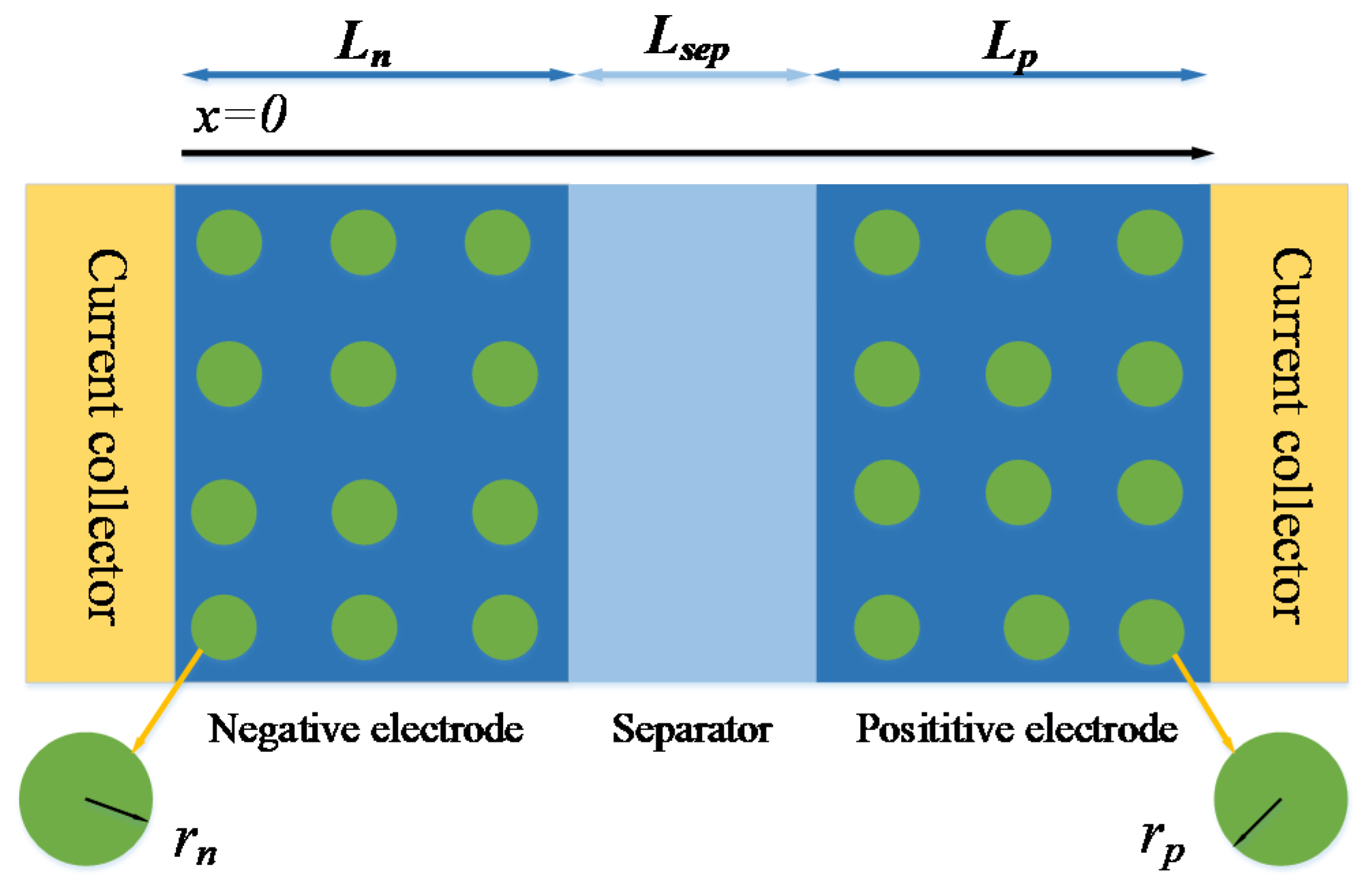