The impact of the world-wide ageing population has commenced with respect to society in developed countries. Several researchers focused on exploring new methods to improve the quality of life of elderly individuals by allowing them to remain independent and healthy to the maximum possible extent. For example, new walking aids are designed to allow elderly individuals to remain mobile in a safe manner because the importance of walking is well-known. The aim of the present study involves designing a humanoid robot guide as a walking trainer for elderly individuals. It is hypothesized that the same service robot provides an assistive and social contribution with respect to interaction between elderly users by motivating them to walk more and simultaneously provides assistance, such as physical assistance and gait monitoring, while walking. This study includes a detailed statement of the research problem as well as a literature review of existing studies related to walking companion robots. A user-centred design approach is adopted to report the results of the current first feasibility study by using a commercially available humanoid robot known as Pepper developed by Softbank-Aldebaran. A quantitative questionnaire was used to investigate all elements that assess intrinsic motivation in users while performing a given activity. Conversely, basic gait data were acquired through a video analysis to test the capability of the robot to modify the gait of human users. The results in terms of the feedback received from elderly subjects and the literature review improve the design of the walking trainer for elderly individuals. View Full-Text
Keywords: socially assistive robotics; elderly; gait; intrinsic motivation; user-centred design of robots socially assistive robotics; elderly; gait; intrinsic motivation; user-centred design of robots
►▼ Show Figures 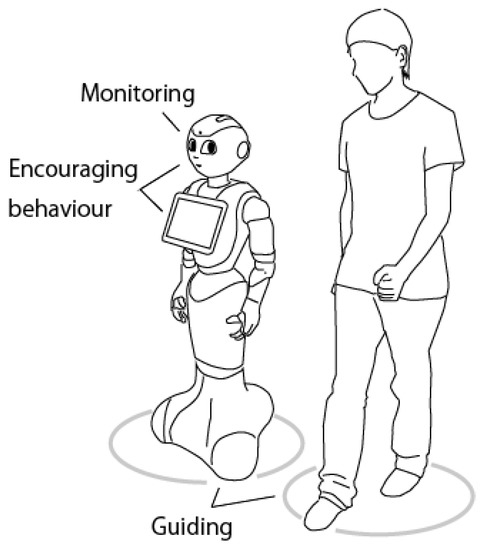