Passive Radio Frequency IDentification (RFID) tags are generally highly constrained and cannot support conventional encryption systems to meet the required security. Hence, designers of security protocols may try to achieve the desired security only using limited ultra-lightweight operations. In this paper, we show that the security of such protocols is not provided by using rotation functions. In the following, for an example, we investigate the security of an RFID authentication protocol that has been recently developed using rotation function named ULRAS, which stands for an Ultra-Lightweight RFID Authentication Scheme and show its security weaknesses. More precisely, we show that the ULRAS protocol is vulnerable against de-synchronization attack. The given attack has the success probability of almost ‘1’, with the complexity of only one session of the protocol. In addition, we show that the given attack can be used as a traceability attack against the protocol if the parameters’ lengths are an integer power of 2, e.g., 128. Moreover, we propose a new authentication protocol named UEAP, which stands for an Ultra-lightweight Encryption based Authentication Protocol, and then informally and formally, using Scyther tool, prove that the UEAP protocol is secure against all known active and passive attacks. View Full-Text
Keywords: RFID; ULRAS; UEAP; mobile commerce; RR method; authentication; de-synchronization attack; traceability attack RFID; ULRAS; UEAP; mobile commerce; RR method; authentication; de-synchronization attack; traceability attack
►▼ Show Figures 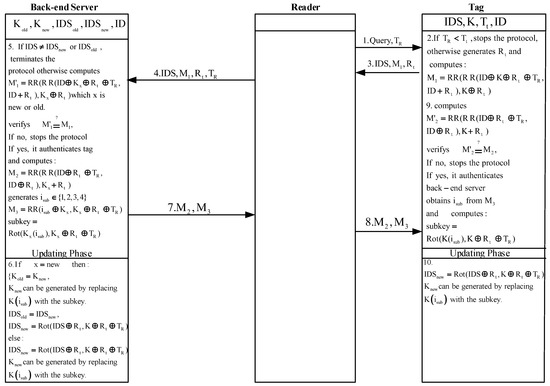