Antibodies for the Treatment of Brain Metastases, a Dream or a Reality?
Previous Article in Journal

Polyethyleneimine, poly-L-lysine, chitosan and some others cationic polymers have been thoroughly studied as nucleic acid delivery systems in gene therapy. However, the drug release from these systems proceeds at a very low rate due to extremely high binding between a carrier and gene material. To reduce these interactions and to enhance drug release, we developed a set of amphiphilic polypeptides containing positively and negatively charged amino acids as well as a hydrophobic one. The copolymers obtained were characterized by size-exclusion chromatography, static light scattering, HPLC amino acid analysis and 1HNMR spectroscopy. All copolymers formed particles due to a self-assembly in aqueous media. Depending on polypeptide composition, the formation of particles with hydrodynamic diameters from 180 to 900 nm was observed. Stability of polymer particles, loading and release efficiency were carefully studied. Cellular uptake of the particles was efficient and their cytotoxicity was negligible. The application of polymer carriers, containing siRNA, to vascular endothelial growth factor (VEGF-A165) silencing of ARPE-19 cells was successful. The gene silencing was confirmed by suppression of both messenger RNA and protein expression. View Full-Text
Keywords: amphiphilic polypeptides; self-assembly; nanoparticles; siRNA delivery; VEGF; gene silencing amphiphilic polypeptides; self-assembly; nanoparticles; siRNA delivery; VEGF; gene silencing
►▼ Show Figures 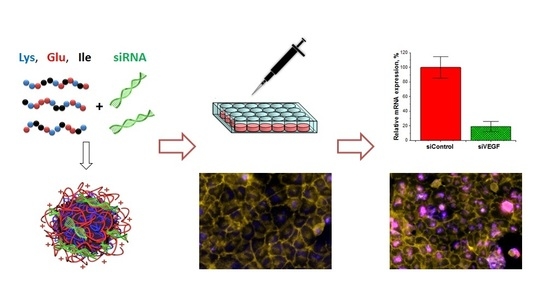