This study optimized the preparation of electrosprayed microspheres containing leuprolide and developed an in vitro–in vivo correlation (IVIVC) model that enables mutual prediction between in vitro and in vivo dissolution. The pharmacokinetic (PK) and pharmacodynamic (PD) study of leuprolide was carried out in normal rats after subcutaneous administration of electrosprayed microspheres. The parameters of the IVIVC model were estimated by fitting the PK profile of Lucrin depot® to the release compartment of the IVIVC model, thus the in vivo dissolution was predicted from the in vitro dissolution. From this correlation, the PK profile of leuprolide was predicted from the results of in vivo dissolution. The IVIVC model was validated by estimating percent prediction error (%PE) values. Among prepared microspheres, an optimal formulation was selected using the IVIVC model. The maximum plasma concentration and the area under the plasma concentration–time curve from zero to infinity from the predicted PK profile were 4.01 ng/mL and 52.52 h·ng/mL, respectively, and from the observed PK profile were 4.14 ng/mL and 56.95 h·ng/mL, respectively. The percent prediction error values of all parameters did not exceed 15%, thus the IVIVC model satisfies the validation criteria of the Food and Drug Administration (FDA) guidance. The PK/PD evaluation suggests that the efficacy of OL5 is similar to Lucrin depot®, but the formulation was improved by reducing the initial burst release. View Full-Text
Keywords: in vitro–in vivo correlation; leuprolide; microspheres; sustained release; pharmacokinetics; pharmacodynamics in vitro–in vivo correlation; leuprolide; microspheres; sustained release; pharmacokinetics; pharmacodynamics
►▼ Show Figures 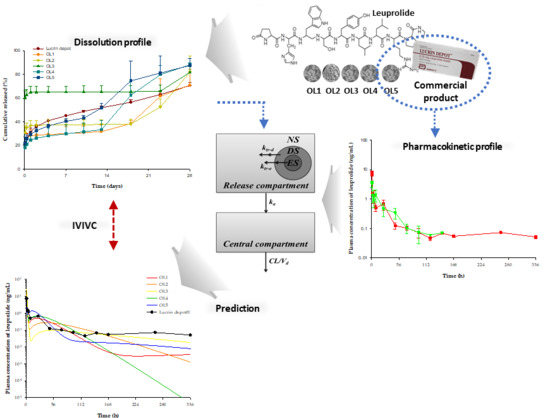