Pharmacokinetics and Metabolism of Acetyl Triethyl Citrate, a Water-Soluble Plasticizer for Pharmaceutical Polymers in Rats

Acetyl triethyl citrate (ATEC) is a water-soluble plasticizer used in pharmaceutical plasticized polymers. In this study, the pharmacokinetics and metabolism of ATEC were investigated using liquid chromatography–tandem mass spectrometry (LC–MS/MS) in rats. Plasma protein precipitation with methanol was used for sample preparation. For chromatographic separation, a C18 column was used. The mobile phases consisted of 0.1% formic acid and 90% acetonitrile, and gradient elution was used. The following precursor-product ion pairs were selected for reaction monitoring analysis: 319.1 m/z → 157 m/z for ATEC and 361.2 m/z → 185.1 m/z for tributyl citrate (internal standard) in positive ion mode. The LC–MS/MS method was fully validated and successfully applied to a pharmacokinetic study of ATEC in rats. The pharmacokinetic study showed that the volume of distribution and mean residence time of ATEC were higher after oral administration than after intravenous administration, pointing to extensive first-pass metabolism and distribution in tissue. In addition, the plasma concentration profile of the postulated metabolites of ATEC was investigated in plasma, urine, and feces. The resulting data indicated that ATEC was extensively metabolized and excreted mainly as metabolites rather than as the parent form. The developed analytical method and the data on the pharmacokinetics and metabolism of ATEC may be useful for understanding the safety and toxicity of ATEC. View Full-Text
Keywords: acetyl triethyl citrate; plasticizer; pharmaceutical polymers; pharmacokinetics; metabolism acetyl triethyl citrate; plasticizer; pharmaceutical polymers; pharmacokinetics; metabolism
►▼ Show Figures 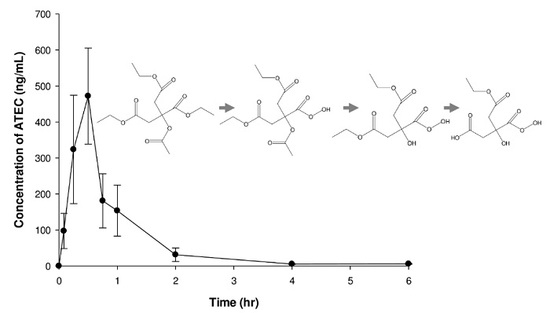