The arrangement of the matter in the structure of a semisolid product, also known as microstructure [1], is determined by the components employed in its formulation (e.g., polymorphism, size and shape of the dispersed particles of the active substance, grade and rheology of the excipients, interfacial tension between phases, partition coefficient of the active substance between the different phases) and the manufacturing process. This microstructure and the excipient composition do not only affect the organoleptic properties of the product, but also the drug permeation through the skin [1,2,3].
The European Medicines Agency (EMA) has released for consultation a draft guideline on the quality and equivalence of topical products [4]. The characterization of topical semisolids includes the investigation of their physical properties, which are defined by their microstructure, influence bioavailability and usability of the product and are indicative of stability and consistency of the manufacturing process. This draft guideline assumes that if the physical properties of two products with similar qualitative and quantitative composition are sufficiently similar, the microstructure of the formulation can also be considered similar.
According to this draft guideline, the demonstration of therapeutic equivalence of two products requires comparison of the qualitative (Q1) and quantitative (Q2) composition of the formulations, as well as a comparison of these physical properties (Q3). This comparison should be conducted in at least three batches of the reference product and three batches of the test product with at least 12 replicates per batch.
The microstructure characterization includes rheology, type of emulsion and physical state of drug in semisolid system (polymorphic form, solubilized drug vs. dispersed solid drug, particle size of drug particles) [1]. The draft guideline specifies that the non-Newtonian rheological behavior has to be characterized by investigating the complete flow curve (viscosity or shear stress versus shear rate) and the linear viscoelastic response (creep-recovery tests or oscillatory measurements at different frequencies). This allows calculation of parameters of viscosities at specified shear rates, yield stress values, thixotropic relative area (SR), elastic and viscous moduli (G’ and G″), or loss tangent (tan δ). To conclude equivalence of these microstructure characteristics, the 90% confidence interval (CI) of the difference between means of both formulations should not be more than 10% from the reference product mean, assuming normal distribution of data. According to this draft guideline, equivalence has to be concluded for all rheological parameters that define the microstructure of the product. Neither the parameters that define the microstructure of semisolid pharmaceuticals, nor the acceptance limits that ensure equivalence in those parameters have so far been defined in the literature. Moreover, since all the rheological parameters mentioned above are not included as routine analysis when delivering new batches, the inter-batch variability has not been characterized. When evaluating rheological parameters, inter-batch variability can be due to multiple factors, such as excipient or formulation manufacturing, storage conditions and aging of the formulation.
Daivobet ointment (LeoPharma, Dublin, Ireland) is a combination product of the vitamin D analogue calcipotriol monohydrate and the corticosteroid betamethasone dipropionate. It is indicated for topical treatment of stable plaque psoriasis vulgaris in adults. A maximum daily dose of 15 g and maximum body surface area to be treated of 30% should not be exceeded to avoid vitamin D-related adverse events such as hypercalcemia.
The objective of the present work is to assess if the inter-batch variability of the rheological parameters in the reference product Daivobet allows concluding equivalence within a ±10% acceptance range, as defined in the EMA draft guideline on the quality and equivalence of topical products.

Ten batches of Daivobet 50 µg/g + 0.5 mg/g ointment (a two-compound ointment with 50 µg/g calcipotriol and 0.5 mg/g betamethasone dipropionate) were purchased on the Spanish, Portuguese and German markets. The manufacturer of all these batches was Leo Laboratories Ltd. (Dublin, Ireland).
Manufacturing dates ranged from February 2017 to January 2018. Assays were performed between 6 months and 1 year after manufacturing. All samples were preserved at 20–25 °C.

Hysteresis loops were performed in three stages (rheometer set at controlled shear rate mode):
Upward curve, measuring from 1 s−1 and 100 s−1 in a stepped ramp (20 steps in logarithmic distribution; 10 s per step).
Continuous rotation at 100 s−1 for 60 s (measuring 10 timepoints).
Downward curve, measuring from 100 s−1 to 1 s−1 in stepped ramp (20 steps in logarithmic distribution; 10 s per step).
The relative thixotropic areas were obtained using Equation (1). The areas enclosed by both the upward (SA) and the downward (SD) curves were calculated by numerical integration, the difference between them being the thixotropic area (ST). The relative thixotropic area (SR) [5] is useful in order to compare different samples:

Stepped flow curves were performed in controlled stress mode in logarithmic distribution with 20 steps and 60 s per step. Stress ranged between 1 Pa (initial σ) and 1300 Pa (final σ). The simplified Carreau model was satisfactorily fitted to viscosity values as a function of shear rate data [6]: where η0 is the zero-shear viscosity, c is critical shear rate, and s the shear thinning index. Viscosity corresponding to 100 s−1 was also calculated from the curve fits obtained.
Yield stress (σ0) was estimated on the double log scaled rheograms η = f (σ) from the point where the straight line corresponding to the viscosity plateau intersects the tangent line to the fall in viscosity [7].

The elastic (G’) and viscous (G″) moduli were obtained from the frequency sweep tests performed between 0.01 and 10 Hz at a stress amplitude of 10 Pa (within the linear viscoelastic region, previously determined from stress sweep tests at 1 Hz).
The dynamic spectra, i.e., the variation of viscoelastic moduli as a function of oscillation frequency ν (in Hz) were fitted to power law empirical equations: where and are the calculated moduli at a frequency of 1 Hz and m’ and m″ (dimensionless) correspond to the slopes in double logarithmic scales, indicating the frequency-dependence of each modulus [8].
The tangent of the phase shift, or loss tangent, which gives the relation between both dynamic moduli, was also calculated at 1 Hz.

Spreadability was calculated by placing 1 g of sample between two glass dishes and progressively adding 50, 100 and 200 g weights on top (10 batches; 12 replicates per batch). Weight was removed after 5 min and the diameter of the squeezed product was measured. The surface area versus weight curve was calculated using Excel 2016 (Microsoft, Redmond, WA, USA).

The physical parameters of the 10 batches (12 replicates each) were compared by three different methods (see below) using Excel 2016 (Microsoft) and assuming homoscedasticity.

The physical parameters of each batch of the reference product were compared with those of the other nine batches (45 possible combinations), assessing whether they would be considered equivalent. Equivalence was considered when the 90% CI of the ratio between batches being compared was within a certain acceptance range. The frequency of considering equivalence was determined at different acceptance limits ranging from ±10% to ±30% (i.e., from 90.00–111.11% to 70.00–142.86%). When at least 80% of comparisons were within the limit evaluated, the parameters were considered equivalent.

The physical parameters of five out of 10 batches were selected as test product and compared with the other five batches as reference product (126 possible combinations). Equivalence was considered when the 90% CI of the ratio between mean of five batches of test and reference products being compared were within a certain acceptance range. The frequency of considering equivalence was calculated as described above.

Again five out of 10 batches were selected as test product and compared with the other five batches as reference product (126 possible combinations). To compare each physical parameter, the mean value of the median batch within each group were considered. The frequency of considering equivalence was calculated as described above.

Non-parametric comparisons were done using bootstrap [9]. Analyses were conducted using experimental data of these physical parameters (described in Section 2.2 and Section 2.3). Ninety percent non-parametric CI were calculated from the probability distribution of the geometric mean ratios from 10,000 bootstraps. For each simulation, a reference and a test batch were randomly selected without replacement. The 90% CI estimation was assessed by either a “1 vs. 1″ comparison (one reference vs. one test batch) or a “5 vs. 5″ comparison (five reference vs. five test batches). All these bootstrap analyses were performed using either 6, 12, or 24 replicates of each parameter, randomly sampled with replacement. Similarity was concluded when the non-parametric 90% CI for the ratio test/reference was within the ±10% acceptance range (90.00–111.11%). R (V. 3.5.1) and R-studio (V.1.1.447) were used for the bootstrap analyses and graphical display, respectively.

Widening of the ±10% acceptance range based on the inter-batch variability of the reference product seems to be justified when following the methodology and sample size proposed in the EMA draft guideline. Otherwise, the sample size calculation should consider the inter-batch variability, which could render an excessive number of batches to be tested. In our opinion, in vitro testing of more than 5 batches each of test and reference product might be excessive for the development of an abbreviated topical product with a qualitative and quantitative composition equivalent to the reference product.

This work was supported by Kern Pharma S.L. (Spain).

M.P.-V., M.M.-S., M.J.H., A.N. and V.M. received grant funding and non-financial support from Kern Pharma S.L. via their institution. D.P., I.H., L.S. and M.S. are employees of Kern Pharma S.L. (Spain). The funders had no role in the design of the study; in the collection, analyses, or interpretation of data; in the writing of the manuscript, and in the decision to publish the results. 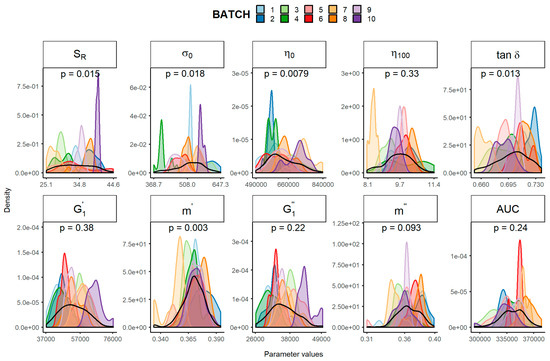 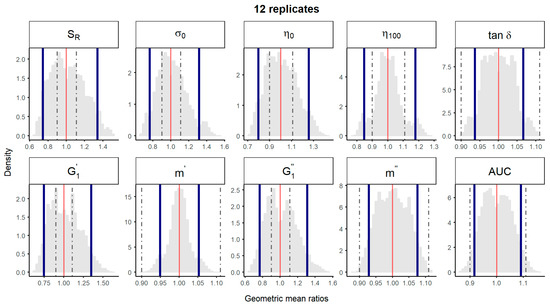 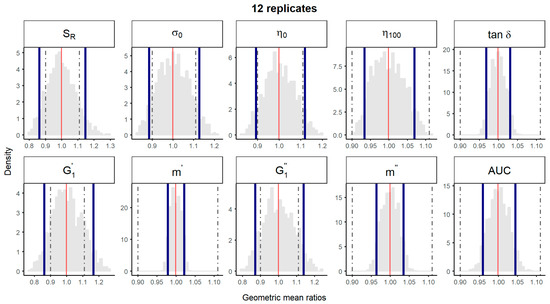 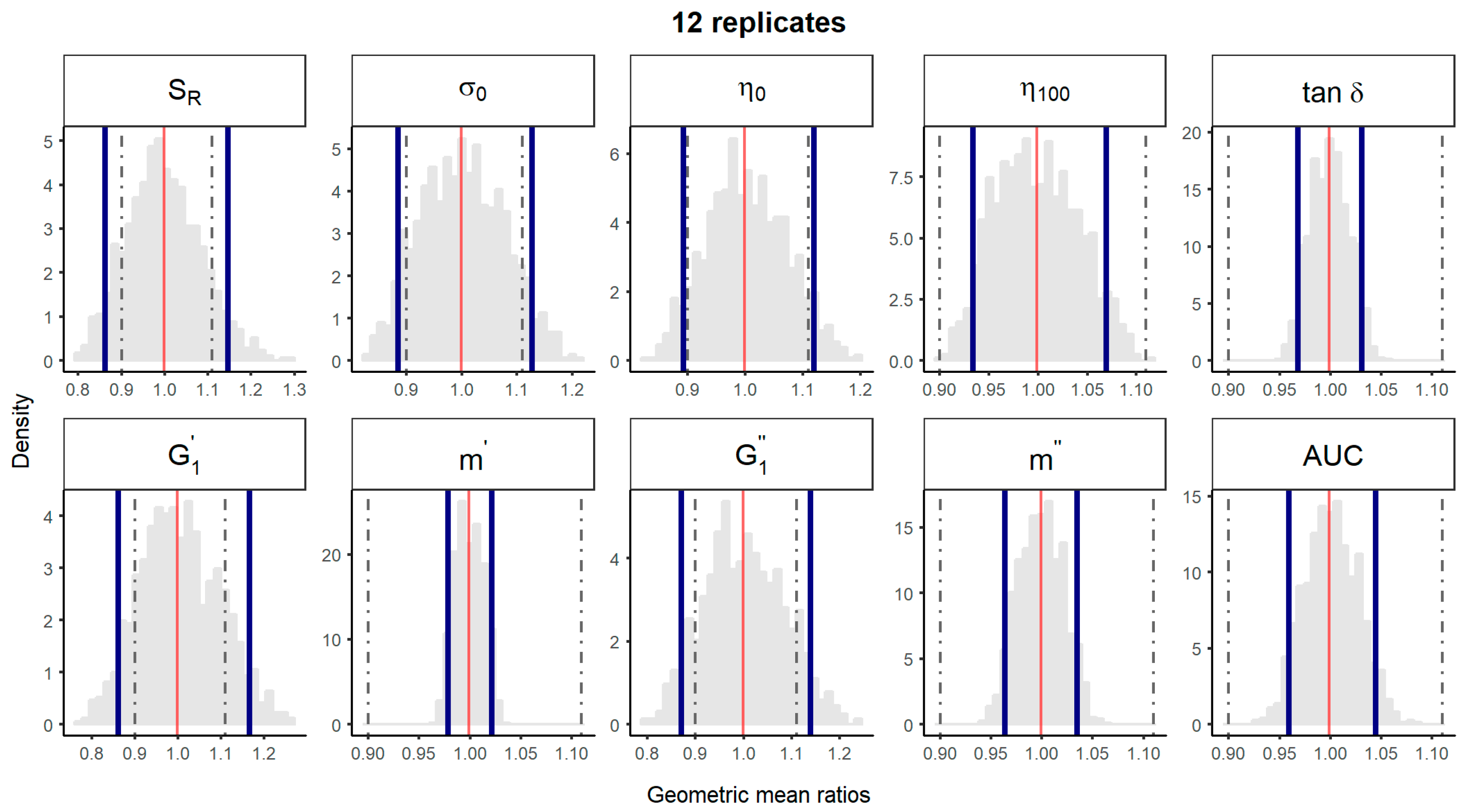