Solvation and Aggregation of Meta-Aminobenzoic Acid in Water: Density Functional Theory and Molecular Dynamics Study
Next Article in Special Issue

Hydrogels evolved as an outstanding carrier material for local and controlled drug delivery that tend to overcome the shortcomings of old conventional dosage forms for small drugs (NSAIDS) and large peptides and proteins. The aqueous swellable and crosslinked polymeric network structure of hydrogels is composed of various natural, synthetic and semisynthetic biodegradable polymers. Hydrogels have remarkable properties of functionality, reversibility, sterilizability, and biocompatibility. All these dynamic properties of hydrogels have increased the interest in their use as a carrier for peptides and proteins to be released slowly in a sustained manner. Peptide and proteins are remarkable therapeutic agents in today’s world that allow the treatment of severe, chronic and life-threatening diseases, such as diabetes, rheumatoid arthritis, hepatitis. Despite few limitations, hydrogels provide fine tuning of proteins and peptides delivery with enormous impact in clinical medicine. Novels drug delivery systems composed of smart peptides and molecules have the ability to drive self-assembly and form hydrogels at physiological pH. These hydrogels are significantly important for biological and medical fields. The primary objective of this article is to review current issues concerned with the therapeutic peptides and proteins and impact of remarkable properties of hydrogels on these therapeutic agents. Different routes for pharmaceutical peptides and proteins and superiority over other drugs candidates are presented. Recent advances based on various approaches like self-assembly of peptides and small molecules to form novel hydrogels are also discussed. The article will also review the literature concerning the classification of hydrogels on a different basis, polymers used, “release mechanisms” their physical and chemical characteristics and diverse applications. View Full-Text
Keywords: hydrogels; peptides; proteins; crosslinked networks; controlled release; biodegradable polymers hydrogels; peptides; proteins; crosslinked networks; controlled release; biodegradable polymers
►▼ Show Figures 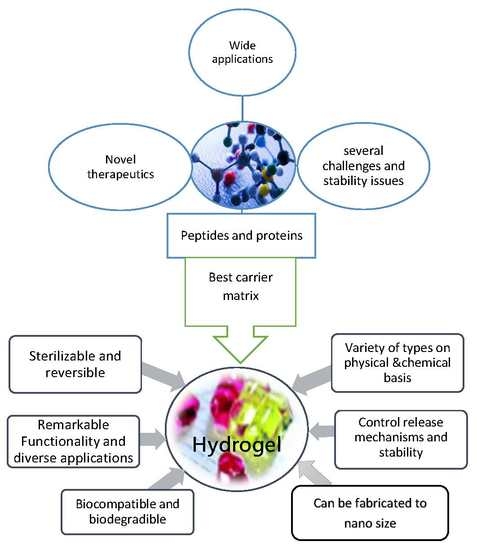