Zika Virus: Recent Advances towards the Development of Vaccines and Therapeutics
Next Article in Special Issue

The Spounavirinae viruses are ubiquitous in nature and have an obligatory virulent lifestyle. They infect Firmicutes, a bacterial phylum containing an array of environmental non-pathogenic and pathogenic organisms. To expand the knowledge of this viral subfamily, new strains were isolated and investigated in this study. Here we present two new viruses, vB_BsuM-Goe2 and vB_BsuM-Goe3, isolated from raw sewage and infecting Bacillus species. Both were morphologically classified via transmission electron microscopy (TEM) as members of the Spounavirinae subfamily belonging to the Myoviridae family. Genomic sequencing and analyses allowed further affiliation of vB_BsuM-Goe2 to the SPO1-like virus group and vB_BsuM-Goe3 to the Bastille-like virus group. Experimentally determined adsorption constant, latency period, burst size and host range for both viruses revealed different survival strategies. Thus vB_BsuM-Goe2 seemed to rely on fewer host species compared to vB_BsuM-Goe3, but efficiently recruits those. Stability tests pointed out that both viruses are best preserved in LB-medium or TMK-buffer at 4 or 21 °C, whereas cryopreservation strongly reduced viability. View Full-Text
Keywords: phage; virus; Bacillus subtilis; vB_BsuM-Goe2; vB_BsuM-Goe3; Spo1virus; Bastillevirus; Spounavirinae phage; virus; Bacillus subtilis; vB_BsuM-Goe2; vB_BsuM-Goe3; Spo1virus; Bastillevirus; Spounavirinae
►▼ Show Figures 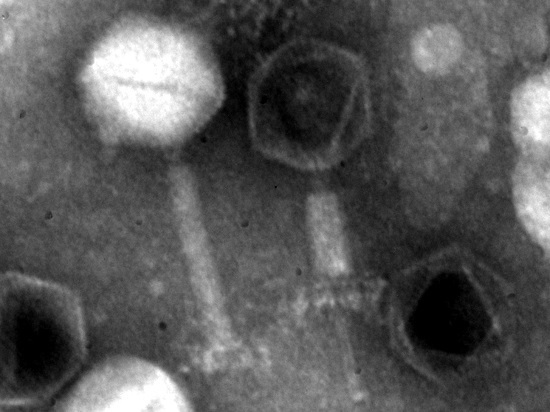