The Telomeric Response to Viral Infection

T-cell exhaustion is a state whereby normal T-cell functions are impaired as a consequence of chronic antigen stimulation. The details of T-cell exhaustion are still being defined, but include: 1- impaired memory T cells; 2- impaired CD8+ T-cell effector responses; 3- impaired CD4+ T-cell responses; 4- resistance to apoptosis; and 5- accelerated immune senescence (Figure 3). The theory that CD8+ T-cell functions are exhausted during chronic viral infections was originally described during chronic lymphocytic choriomeningitis virus (LCMV) infection in mice [44]. Unlike acute viral infections, some LCMV viral isolates persist within their host and do not cause lethality, thereby mimicking chronic infection [45]. The host’s CTL response disappears following infection with these chronic strains of LCMV. The original proposal advocated that the virus was never effectively cleared because T cells were overwhelmed fighting the virus and the CTL response was eliminated entirely. It is now clear that exhausted T cells show progressive losses in antiviral functions. Proliferative capacity is diminished, followed by sequential loss of interleukin-2 (IL-2) production, cytolytic killing, decreased tumor necrosis factor (TNF) and interferon-gamma (IFNγ) production, and diminished degranulation, all of which can result in clonal deletion [46]. Dampened cytolytic responses during chronic viral infections have been shown in viral-specific CD8+ T cells of HIV, EBV, and cytomegalovirus (CMV) infection [47]. This includes loss of perforin, along with granzyme proteases that are vital for CTL’s ability to eliminate antigen-presenting cells and to control the level of activated CD8+ T cells through apoptosis during chronic infection [48]. There is also an extensive profile of gene dysregulation between exhausted T cells and naïve or effector T cells, including defects in host cell signaling molecules, calcium binding, cytokine signaling, apoptosis/cell death, and migration [6].
Impaired CTL function is attributed, in part, to the presence of co-inhibitory markers that are part of the normal, yet transient, response to acute infection. These inhibitory markers serve to dampen and inhibit further immune responses, but continue to be expressed on the surface of exhausted T cells. A more advanced stage of T-cell exhaustion, marked by damped T-cell effector functions, occurs when more inhibitory markers are found on the surface of the T cell, along with a greater variety of inhibitory markers expressed [49,50]. The most well-known and highly expressed inhibitory marker on exhausted T cells is Programmed Death receptor (PD-1), a member of the CD28 co-stimulatory family. PD-1 modulates the T-cell response to infection, reduces CTL effectors, and decreases proliferation of specific effector memory CD8+ T cells [51,52]. Additional markers found on exhausted T cells include natural-killer cell receptor (2B4), T-cell immunoglobulin and mucin protein-3 (TIM-3), natural killer receptor BY55 (CD160), Ly49 family members, lymphocyte-activation gene 3 (LAG-3), cytotoxic T-lymphocyte-associated protein-4 (CTLA-4), and Prostaglandin E Receptor 4 (Ptger4) [6]. Most of these possess immuno-tyrosine inhibitory motifs or switches that decrease active cell signaling in exhausted T cells. For example, TIM-3 prevents effector TH1 responses and expression of TNF and IFN-γ. This, in turn, has adverse effects on non-T-cell populations, such as dendritic cells, natural killer cells (NKs), and macrophages [53]. It is important to note that studies on inhibitory markers were carried out using the LCMV model in mice. Thirteen inhibitory receptors were found to be differentially regulated on exhausted T cells, which may not represent a complete description in human cells. For instance, the mouse glycoprotein 49B (GP49B) was up-regulated on exhausted T cells, but a human homolog has yet to be identified.
Less is known about T-cell exhaustion in CD4+ T cells. It is clear that exhausted CD4+ T cells have an altered phenotype compared to effector and memory CD4+ T cells. Exhausted CD4+ T cells express similar inhibitory markers and transcriptional factors as their counterpart CD8+ cells, including PD-1, but express a higher ratio of some inhibitory markers such as CTLA-4, CD200, and B- and T-lymphocyte associated protein (BTLA) [54]. Exhausted CD4+ T cells have diminished TH1 responses and altered effector functions, the latter related to their distinct transcriptional program. Regulatory T cells (Tregs) also have altered functions during chronic viral infections. Chronic viral infection leads to up-regulation of PD-1 on the surface of Tregs and enhanced Treg proliferation [55]. This allows for greater inhibitory function against CD4+ and CD8+ T cells. In addition, expression of CTLA-4 on the surface of Tregs aids in enhancing their immune suppressive actions [56,57].

Authors would like to thank Brandi Miller for editorial assistance. Research reported in this publication was supported by Grant #CA201309 from the National Cancer Institute of the National Institutes of Health.

Marcia Bellon and Christophe Nicot wrote the paper and designed the figures. 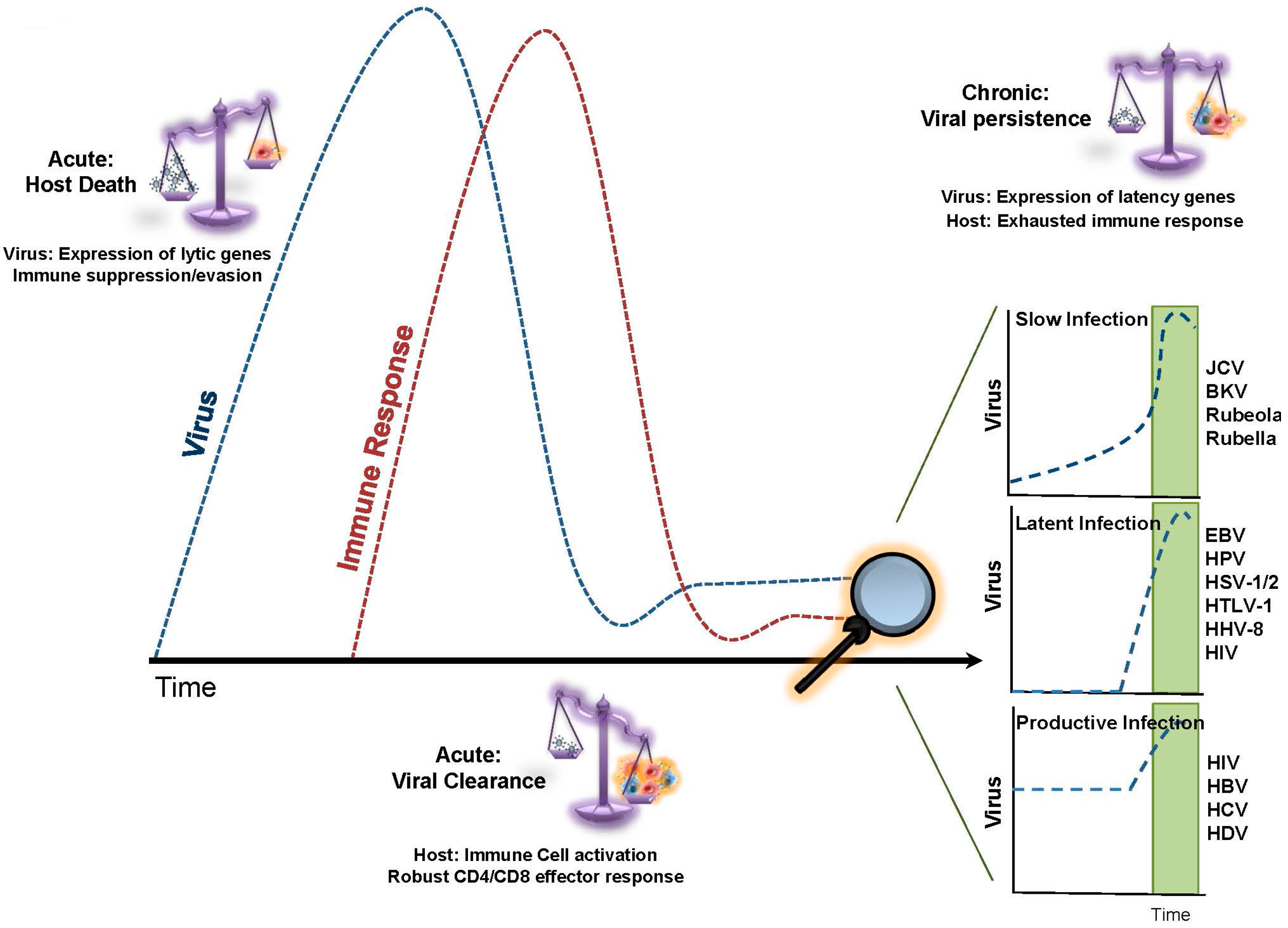 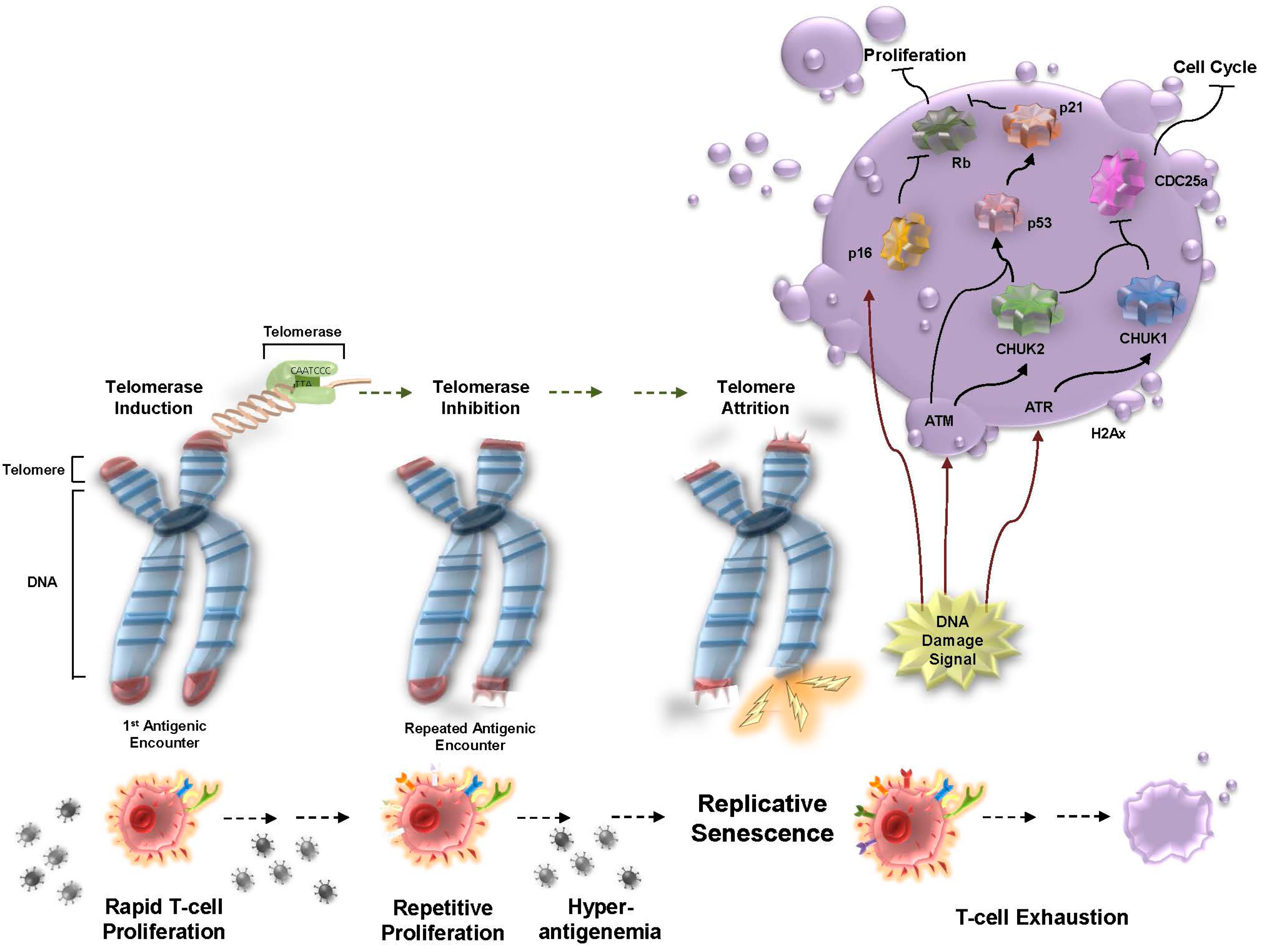