The Peculiar Characteristics of Fish Type I Interferons

Antiviral type I interferons (IFNs) have been discovered in fish. Genomic studies revealed their considerable number in many species; some genes encode secreted and non-secreted isoforms. Based on cysteine motifs, fish type I IFNs fall in two subgroups, which use two different receptors. Mammalian type I IFN genes are intronless while type III have introns; in fish, all have introns, but structurally, both subgroups belong to type I. Type I IFNs likely appeared early in vertebrates as intron containing genes, and evolved in parallel in tetrapods and fishes. The diversity of their repertoires in fish and mammals is likely a convergent feature, selected as a response to the variety of viral strategies. Several alternative nomenclatures have been established for different taxonomic fish groups, calling for a unified system. The specific functions of each type I gene remains poorly understood, as well as their interactions in antiviral responses. However, distinct induction pathways, kinetics of response, and tissue specificity indicate that fish type I likely are highly specialized, especially in groups where they are numerous such as salmonids or cyprinids. Unravelling their functional integration constitutes the next challenge to understand how these cytokines evolved to orchestrate antiviral innate immunity in vertebrates. View Full-Text
Keywords: type I IFN; fish innate immunity; evolution type I IFN; fish innate immunity; evolution
►▼ Show Figures 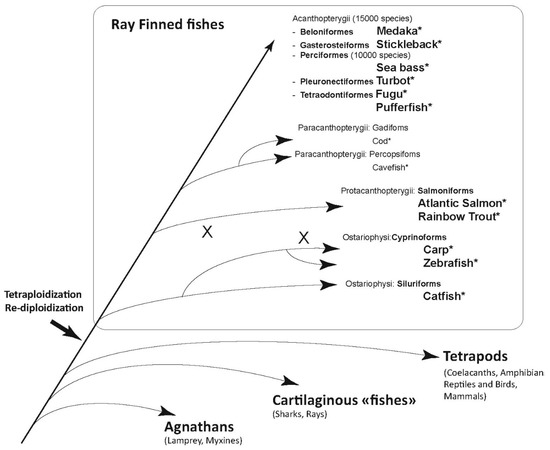