The major threat for cassava cultivation on the Indian subcontinent is cassava mosaic disease (CMD) caused by cassava mosaic geminiviruses which are bipartite begomoviruses with DNA A and DNA B components. Indian cassava mosaic virus (ICMV) and Sri Lankan cassava mosaic virus (SLCMV) cause CMD in India. Two isolates of SLCMV infected the cassava cultivar Sengutchi in the fields near Malappuram and Thiruvananthapuram cities of Kerala State, India. The Malappuram isolate was persistent when maintained in the Madurai Kamaraj University (MKU, Madurai, Tamil Nadu, India) greenhouse, whereas the Thiruvananthapuram isolate did not persist. The recovered cassava plants with the non-persistent SLCMV, which were maintained vegetative in quarantine in the University of Basel (Basel, Switzerland) greenhouse, displayed re-emergence of CMD after a six-month period. Interestingly, these plants did not carry SLCMV but carried ICMV. It is interpreted that the field-collected, SLCMV-infected cassava plants were co-infected with low levels of ICMV. The loss of SLCMV in recovered cassava plants, under greenhouse conditions, then facilitated the re-emergence of ICMV. The partial dimer clones of the persistent and non-persistent isolates of SLCMV and the re-emerged isolate of ICMV were infective in Nicotiana benthamiana upon agroinoculation. Studies on pseudo-recombination between SLCMV and ICMV in N. benthamiana provided evidence for trans-replication of ICMV DNA B by SLCMV DNA A. View Full-Text
Keywords: cassava; geminivirus; persistent and non-persistent SLCMV; ICMV; pseudo-recombination; trans-replication cassava; geminivirus; persistent and non-persistent SLCMV; ICMV; pseudo-recombination; trans-replication
►▼ Show Figures 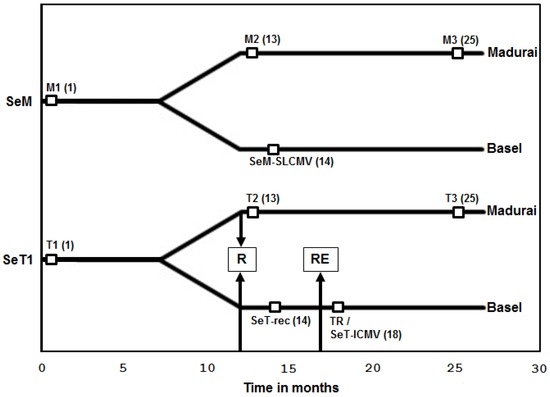