Phylogeographic Diversity of Pathogenic and Non-Pathogenic Hantaviruses in Slovenia

Slovenia is a very diverse country from a natural geography point of view, with many different habitats within a relatively small area, in addition to major geological and climatic differences. It is therefore not surprising that several small mammal species have been confirmed to harbour hantaviruses: A. flavicollis (Dobrava virus), A. agrarius (Dobrava virus–Kurkino), M. glareolus (Puumala virus), S. areanus (Seewis virus),M. agrestis, M. arvalis and M. subterraneus (Tula virus). Three of the viruses, namely the Dobrava, Dobrava–Kurkino and Puumala viruses, cause disease in humans, with significant differences in the severity of symptoms. Due to changes in haemorrhagic fever with renal syndrome cases (HFRS) epidemiology, a detailed study on phylogenetic diversity and molecular epidemiology of pathogenic and non-pathogenic hantaviruses circulating in ecologically diverse endemic regions was performed. The study presents one of the largest collections of hantavirus L, M and S sequences obtained from hosts and patients within a single country. Several genetic lineages were determined for each hantavirus species, with higher diversity among non-pathogenic compared to pathogenic viruses. For pathogenic hantaviruses, a significant geographic clustering of human- and rodent-derived sequences was confirmed. Several geographic and ecological factors were recognized as influencing and limiting the formation of endemic areas.
Keywords: hantavirus; Slovenia; epidemiology; genetic diversity; phylogeography hantavirus; Slovenia; epidemiology; genetic diversity; phylogeography

In Slovenia, the first hantavirus infection was described in 1954, when a patient was infected presumably with the Puumala virus (PUUV) during forestry work in the Pohorje region [1]. Following a number of severe haemorrhagic fever with renal syndrome cases (HFRS) in the southeastern part of Slovenia, the Dobrava virus (DOBV) was isolated in 1988 from the lungs of a yellow-necked mouse captured in Dobrava village. In 1992, it was fully characterized and recognized as a unique hantavirus species [2]. Since then, epidemic outbreaks and sporadic cases have been recorded yearly, with the highest numbers recorded in 2012 (188 cases). The overall case fatality rate is 4.5% [3]. Co-existence of both DOBV and PUUV in a single endemic region has been demonstrated and it was shown that the viruses are capable of causing HFRS with significant differences in severity [3]. Initial genetic analysis of DOBV sequenced from rodents and patients revealed that DOBV in Slovenia is harboured by two distinct species of Apodemus mice: A. favicollis and A. agrarius. Phylogenetic analysis provided strong evidence that two distinct DOBV genotypes are present in Slovenia (Dobrava and Kurkino), but until now, only DOBV–Dobrava was detected in patients [4]. Investigation of Slovenian HFRS cases caused by PUUV has shown the existence of two distinct genetic lineages that are grouping based on their geographical origin [5]. Besides pathogenic, also non-pathogenic hantaviruses (Tula and Seewis viruses) circulate in the same zoonotic regions. High genetic diversity was detected in the Tula virus (TULV), amplified from three different Microtus sp. within a single endemic region. Slovenian TULV sequences showed significant geographical clustering instead of host-specific co-evolution [6]. Furthermore, three highly divergent genetic lineages of the Seewis virus (SWSV), detected in S. araneus, were recently reported in Slovenia. Contrary to other hantaviruses circulating in the country, SWSV does not cluster into geographic lineages, and two genetic lineages are sympatric in one study location [7].
Increasing amplitude and magnitude of HFRS outbreaks in the country and availability of diverse animal collection has enabled us to perform a detailed study on the phylogenetic diversity and molecular epidemiology of pathogenic and non-pathogenic hantaviruses.

Slovenia is formed of five zoogeographic regions: Submediterranean, Dinaric, Alpine, Prealpine and Subpannonian [8]. The formation of these regions is influenced by several abiotic factors, which influence the formation of the habitats: tectonic, lithological, relief, climatic and edaphic conditions. Tectonically, Slovenia is formed of the eastern and southern Alps, the Pannonic basin, and the Dinarides. The lithographic variability is also great, with the majority of Slovenia being rich in limestone and dolomites (Dinaric, Alpine and parts of Prealpine and Submediterranean regions), igneous rocks in the Prealpine region, slates, sandstones and limestone in the Subpannonian region and flysch in the Submediterranean part. Major rivers running through all the regions additionally influence the formation of zoogeographic areas, and are recognized as the zones of highest biological diversity and intense human activity. The Alpine region is also determined by its mountainous relief, which influences its climate and vegetation, comprised mostly of coniferous boreal type and subalpine broad-leaved forest. These forests continue into the Prealpine region, though more lowland forests, rich with beech and spruce, are evident. The Submediterranean region has a lot of influence from the Mediterranean climate, enabling the growth of oak forests, which can also be found in the Subpannonian region, where the climate is continental. The Dinaric region has many hills and sinkholes; the climate is relatively stable and humid, with microclimate areas forming due to its dynamic relief. The forests are mostly broad-leaved, with a significant presence of beech [8].

2.2. Collection of Animal Samples and Detection of Hantavirus RNA

2.3. Collection of Patient Samples and Detection of Hantavirus RNA 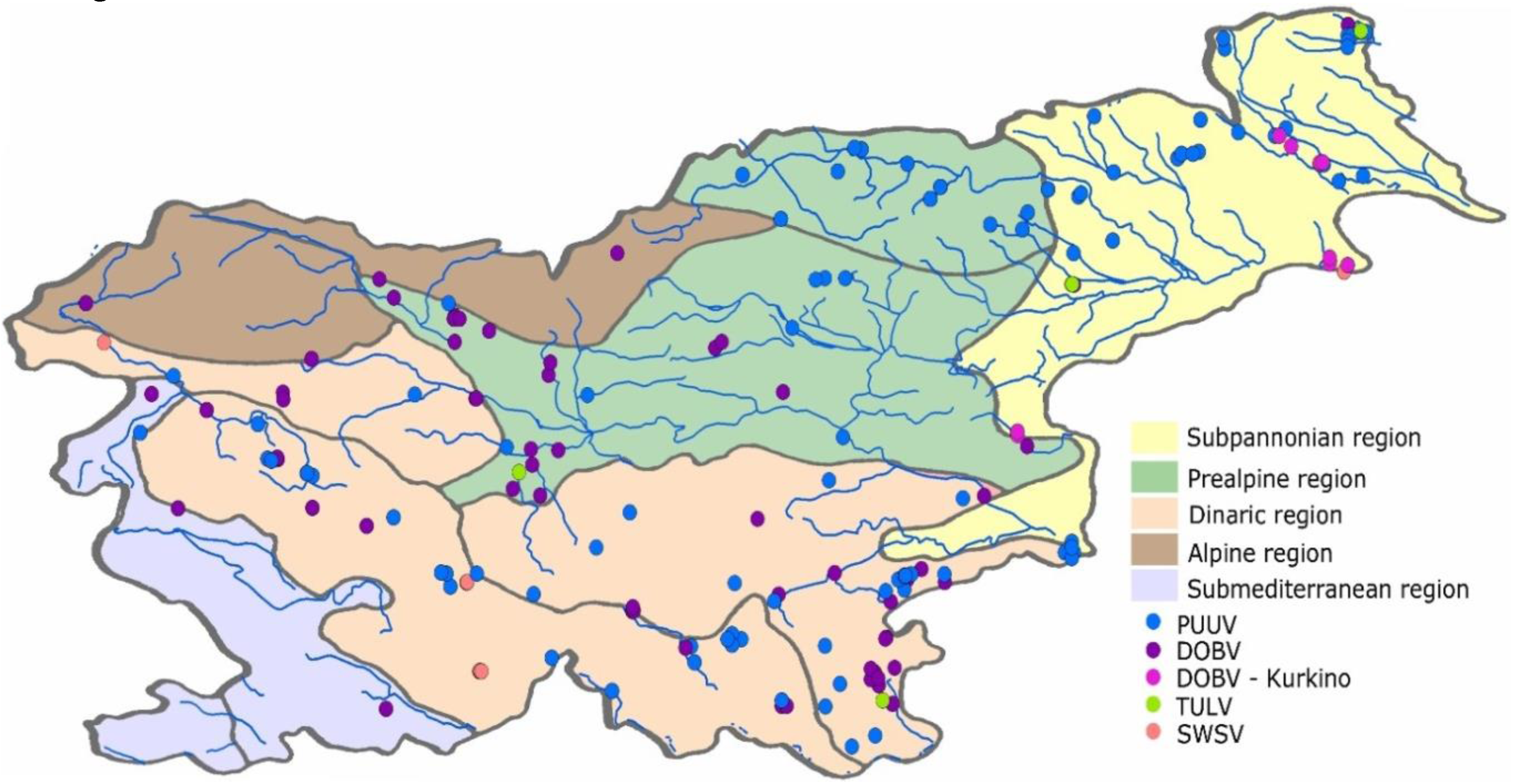 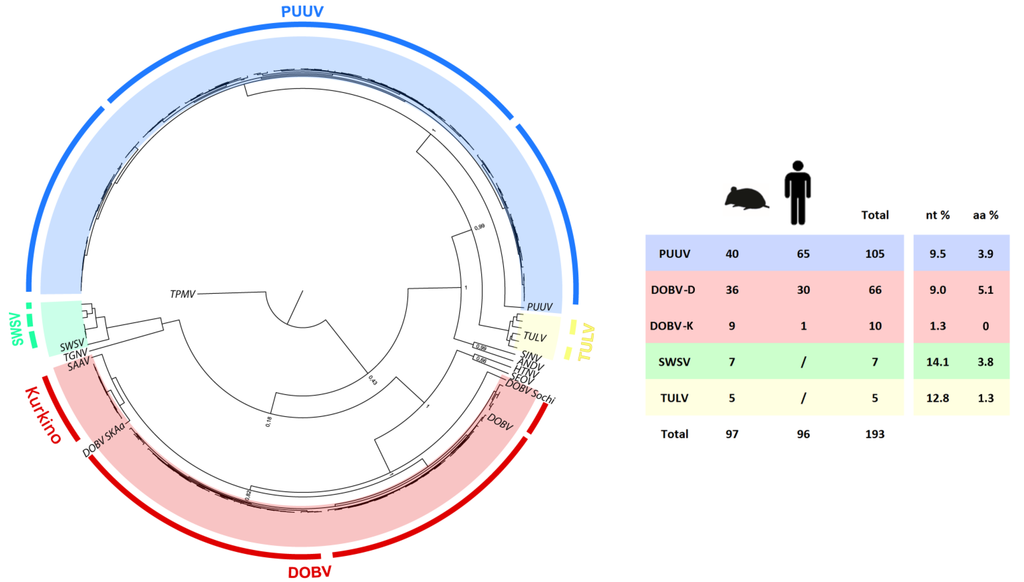 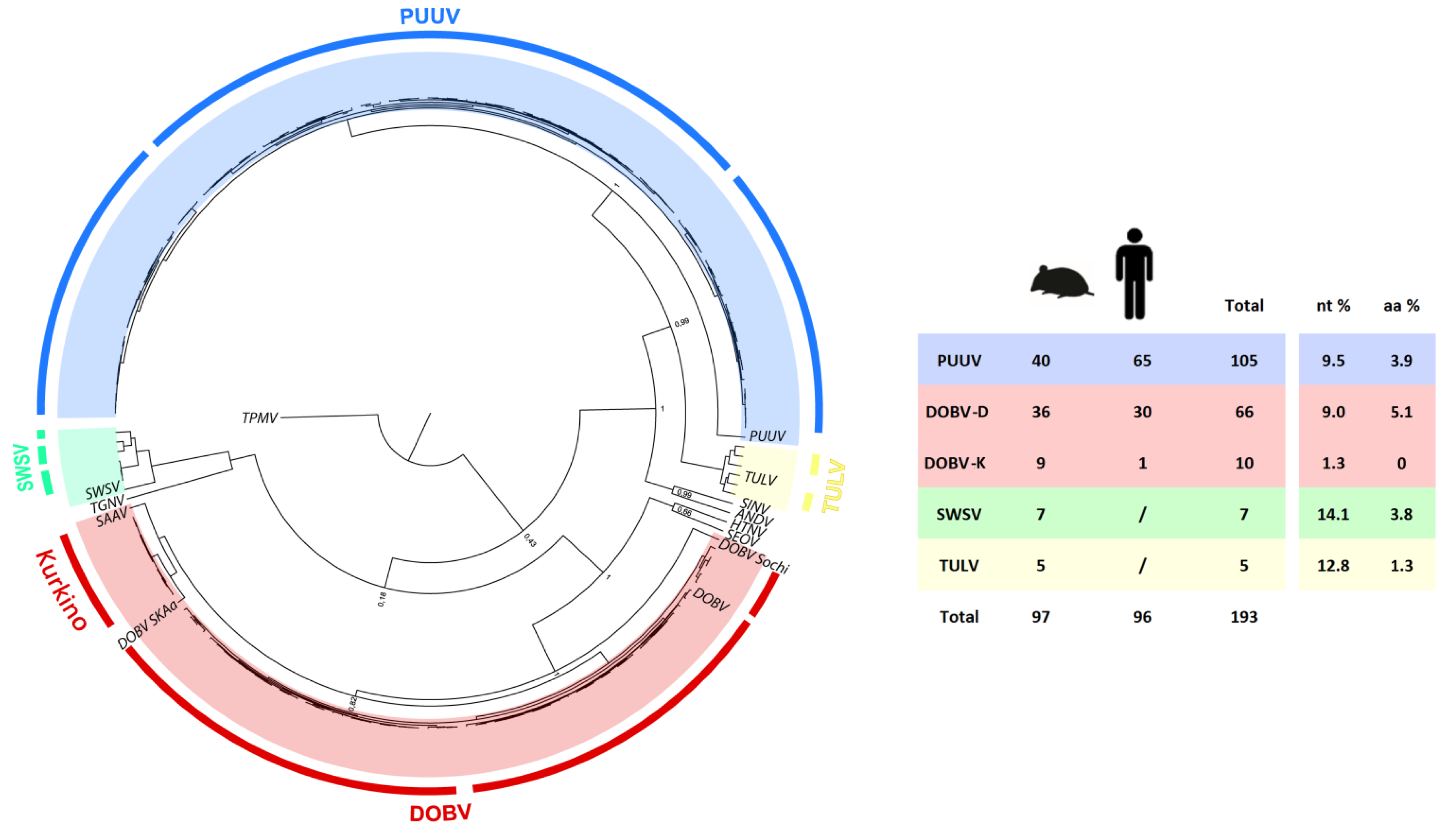 Nucleotide and deduced amino acid distances are shown in Figure 2, where the highest nucleotide diversity was observed within SWSV (14.1%) amplified from common shrews captured in three different localities. High nucleotide diversity (12.8%) was determined also in TULV amplified from three different Microtus sp., where sequences grouped into two phylogenetic lineages according to their geographic origin (Figure 2). In total, 105 PUUV sequences were determined, with divergence ranging from 0%–9.5% on the nucleotide level and up to 3.9% on the deduced amino acid level. Human and bank vole-derived PUUV sequences were correlated within specific geographic areas; sequences clustered into three major phylogenetic lineages ranging from the Subpannonian to the Submediterranean region (Figure 2). All DOBV–Dobrava sequences, derived only from yellow-necked mice, were closely related to each other and to DOBV sequences amplified from patients (nucleotide diversity 0%–9.0%). Above that, a clear geographic clustering showed the existence of three phylogenetic lineages. Additionally to the already established presence of DOBV–Kurkino genotype in striped field mice in the Subpannonian region, the same genotype was determined in the 1 HFRS patient from the same region. Nucleotide diversity of sequences belonging to the DOBV–Kurkino genotype was only 1.3%, with no diversity on the deduced amino acid level (Figure 2). 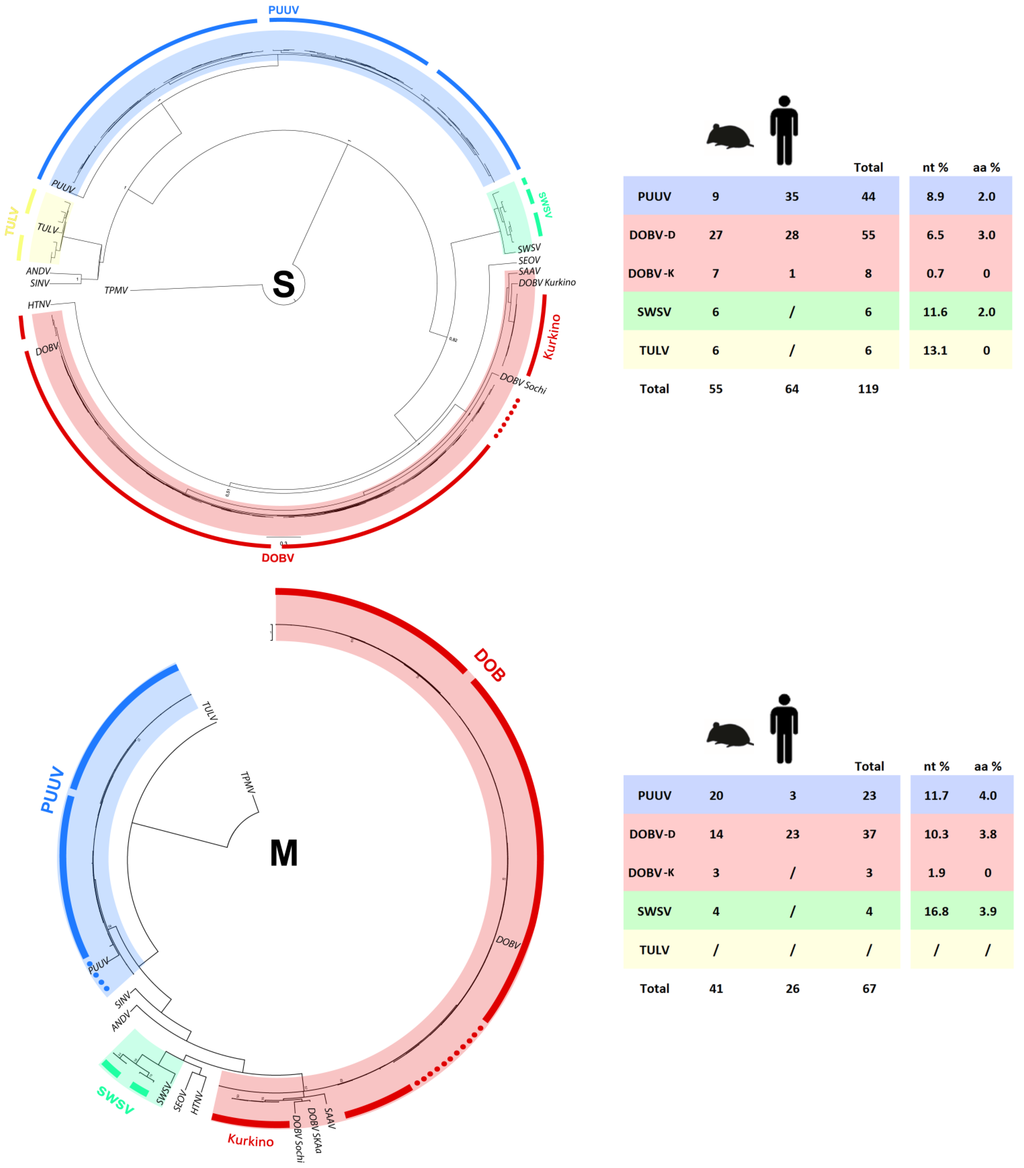 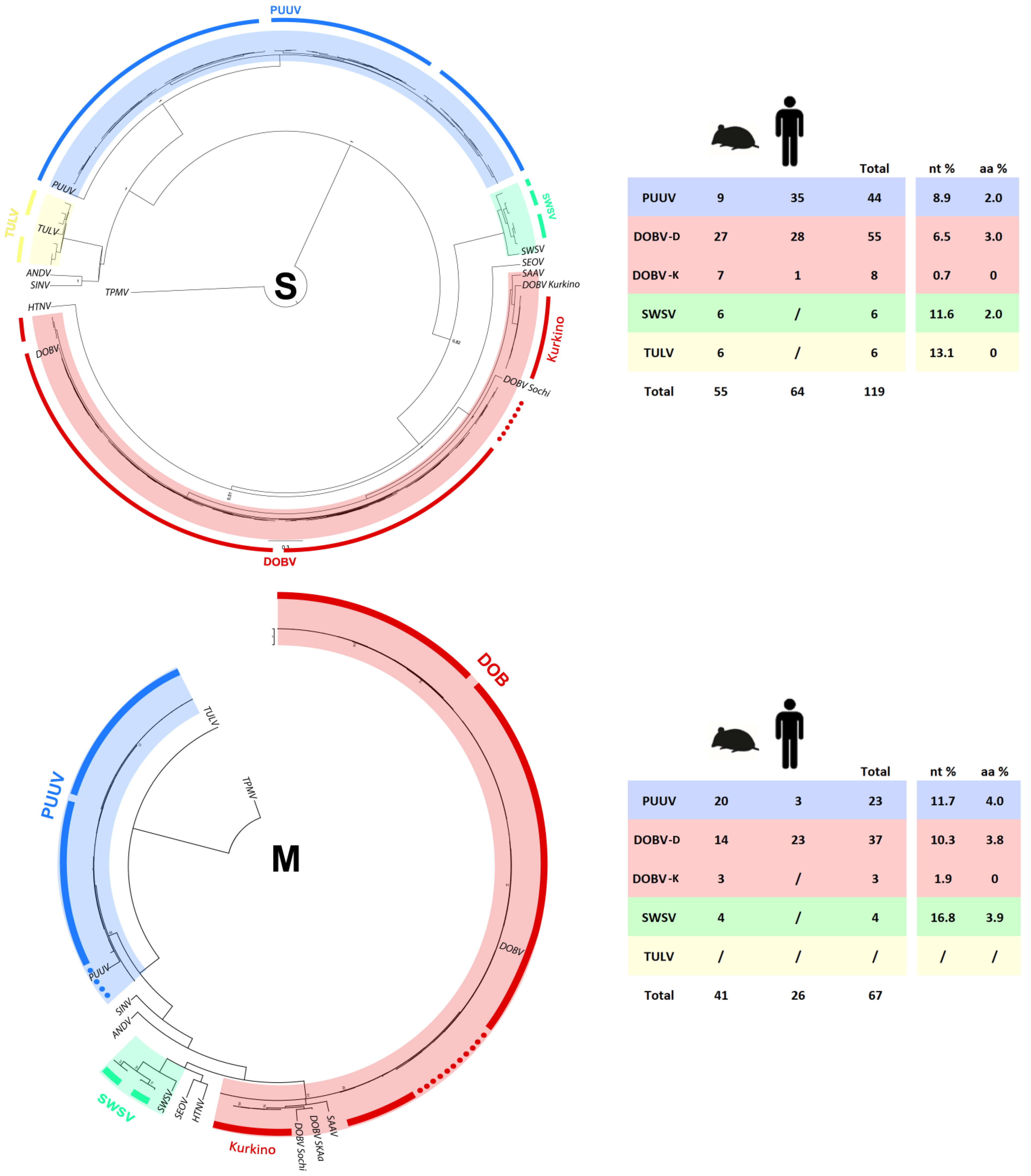 The PUUV and DOBV L segments were used for phylogeographic analyses due to the greatest number of acquired sequences. As seen in Figure 4, three PUUV phylogenetic lineages, designated P1–P3, are related to the geographical origin of sequences obtained from PUUV patients and hosts [7]. The first PUUV lineage (P1) is localized in the Prealpine region and the second lineage (P2) was determined mainly in patients from the Dinaric and Submediterranean regions. The majority of patients and animals infected with PUUV from lineage P3 can be found in the Subpannonian zoogeographic region Statistically significant differences were confirmed in the distribution of specific phylogenetic lineages within zoogeographic regions (χ2, p < 0.0001). Sequences obtained from bank voles and PUUV-infected patients mainly overlap and geographically outlying sequences were all derived from patients. 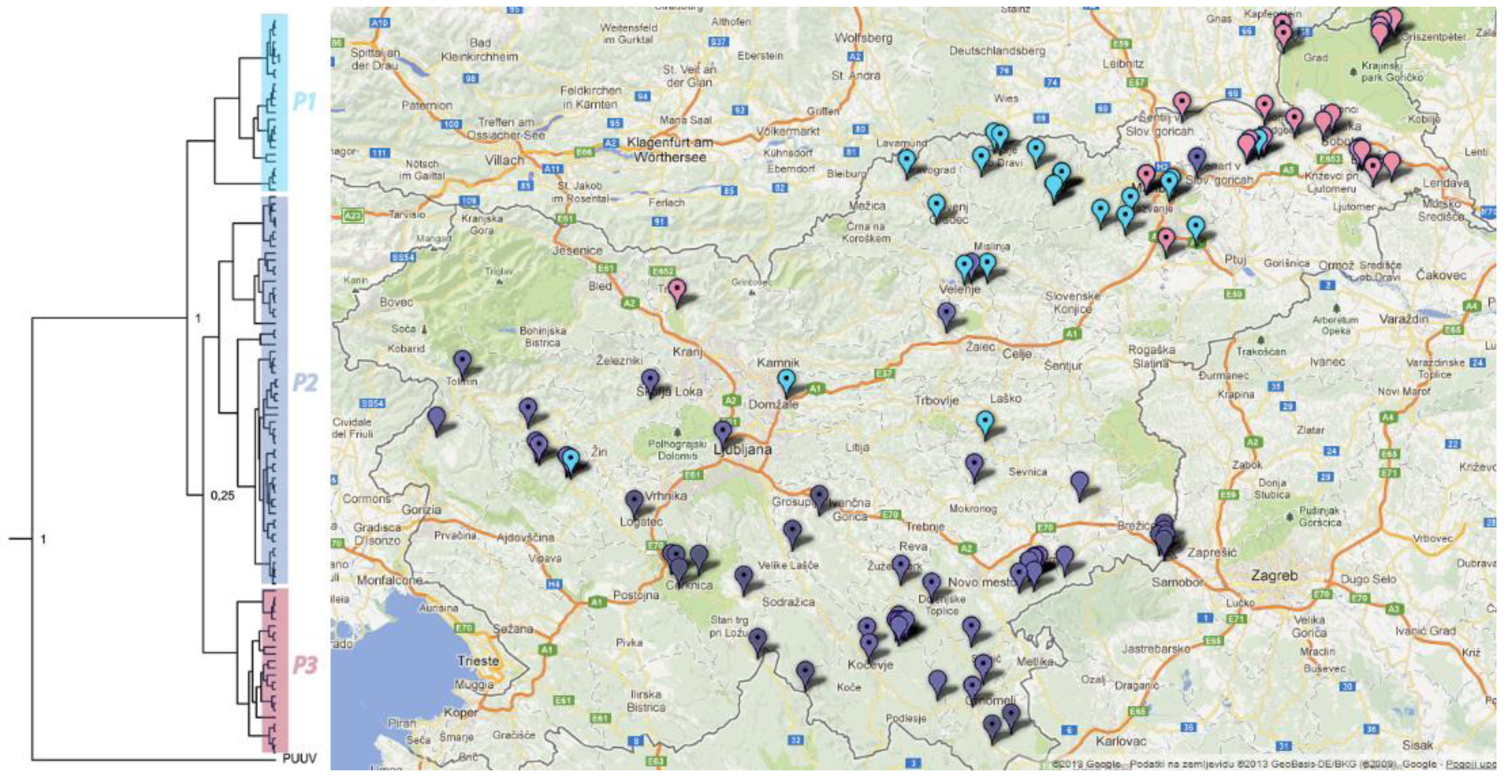 Phylogeographic analysis of DOBV revealed three phylogenetic lineages of the DOBV–vDobrava and one lineage of the DOBV–Kurkino genotype. Distribution of specific phylogenetic lineages was correlated with zoogeographic regions (χ2, p < 0.0001). In the Subpannonian region, both DOBV lineage D1 and DOBV–Kurkino are sympatric in hosts and patients. Moreover, the DOBV–Kurkino sequence obtained from a patient clusters together with the sequences from striped field mice. Lineage DOBV D1 is circulating in a geographically limited focal area, from which patients are rarely reported. However, one sequence from lineage D1 was obtained from a patient resident in the central part of Slovenia. Phylogenetic lineages D2 and D3 show a clear geographical clustering, where sequences from mice and patients mainly overlap. Sequences from the lineage D2 are located in the Dinaric region, where DOBV was isolated for the first time and where the most severe cases of HFRS are reported. The third, the D3 lineage, is mostly found in the Prealpine and Submediterranean regions (Figure 5).

This study was supported by the Ministry of Higher Education, Science and Sport of Slovenia (grant no. P3-0083) and by the European Commission (European Virus Archive, FP7 CAPACITIES project, GA no. 228292). No additional external funding was received for this study. The funders had no role in study design, data collection and analysis, decision to publish, or preparation of the manuscript.