Phylogeographic Diversity of Pathogenic and Non-Pathogenic Hantaviruses in Slovenia

Slovenia is a very diverse country from a natural geography point of view, with many different habitats within a relatively small area, in addition to major geological and climatic differences. It is therefore not surprising that several small mammal species have been confirmed to harbour hantaviruses: A. flavicollis (Dobrava virus), A. agrarius (Dobrava virus–Kurkino), M. glareolus (Puumala virus), S. areanus (Seewis virus),M. agrestis, M. arvalis and M. subterraneus (Tula virus). Three of the viruses, namely the Dobrava, Dobrava–Kurkino and Puumala viruses, cause disease in humans, with significant differences in the severity of symptoms. Due to changes in haemorrhagic fever with renal syndrome cases (HFRS) epidemiology, a detailed study on phylogenetic diversity and molecular epidemiology of pathogenic and non-pathogenic hantaviruses circulating in ecologically diverse endemic regions was performed. The study presents one of the largest collections of hantavirus L, M and S sequences obtained from hosts and patients within a single country. Several genetic lineages were determined for each hantavirus species, with higher diversity among non-pathogenic compared to pathogenic viruses. For pathogenic hantaviruses, a significant geographic clustering of human- and rodent-derived sequences was confirmed. Several geographic and ecological factors were recognized as influencing and limiting the formation of endemic areas. View Full-Text
Keywords: hantavirus; Slovenia; epidemiology; genetic diversity; phylogeography hantavirus; Slovenia; epidemiology; genetic diversity; phylogeography
►▼ Show Figures 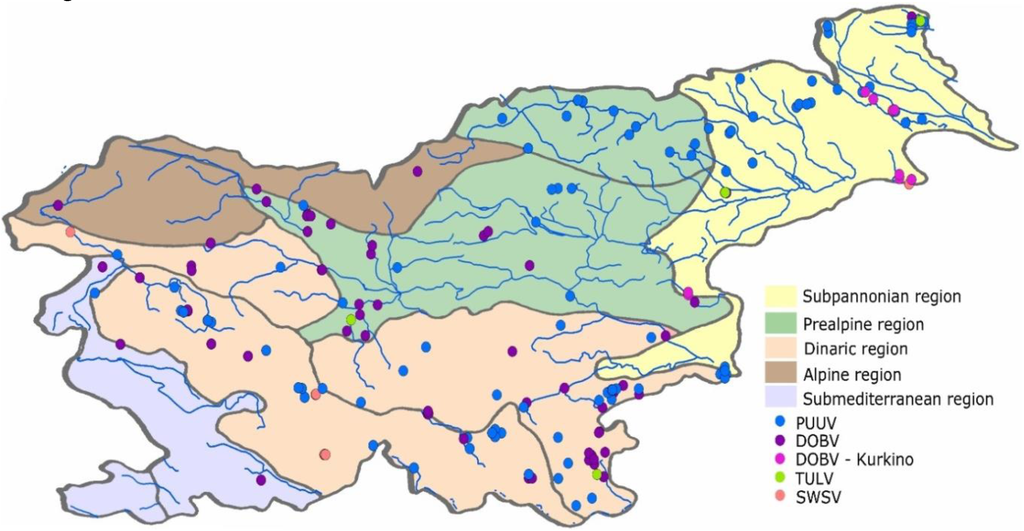