The aim of this study was to evaluate the efficacy of the antiretrovirals: Zidovudine (ZDV) alone; ZDV + Recombinant Human Interferon-α (rHuIFN-α); ZDV + Lamivudine (3TC) and ZDV + valproic acid (Valp) on naturally feline immunodeficiency virus (FIV)-infected cats, in the late phase of the asymptomatic stage of infection. The follow-up was performed over one year, through clinical evaluation and the determination of viral loads and CD4+/CD8+ ratios. Neurological signs were studied by visual and auditory evoked potentials (VEP, AEP) and the responses were abnormal in 80% of the FIV-infected cats. After one year, an improvement in VEP and AEP was observed in the ZDV + Valp group and a worsening in the group receiving ZDV + rHuIFN-α. The CD4+/CD8+ ratio showed a significant increase (both intra and inter-groups) only in ZDV and ZDV + 3TC, between their pre-treatment and one year values, as well as among the other groups. Viral load only showed a significant decrease in ZDV and ZDV + 3TC groups, when comparing the values at one year of treatment vs. pre-treatment values and when the different groups were compared. In addition, the viral load decrease was significantly more pronounced in the ZDV + 3TC vs. ZDV group. We conclude that ZDV and ZDV + 3TC produce significant reductions in viral load and stimulate a recovery of the CD4+/CD8+ ratio, compared with the other protocols. It is clear that the addition of 3TC resulted in a greater reduction in viral load than use of ZDV as a single drug. Therefore, the combination ZDV + 3TC could be more effective than the sole use of ZDV. View Full-Text
Keywords: antiretroviral therapy; FIV; retrovirus; visual and auditory evoked potentials; ZDV; 3TC; valproic acid; rHuIFN-α antiretroviral therapy; FIV; retrovirus; visual and auditory evoked potentials; ZDV; 3TC; valproic acid; rHuIFN-α
►▼ Show Figures 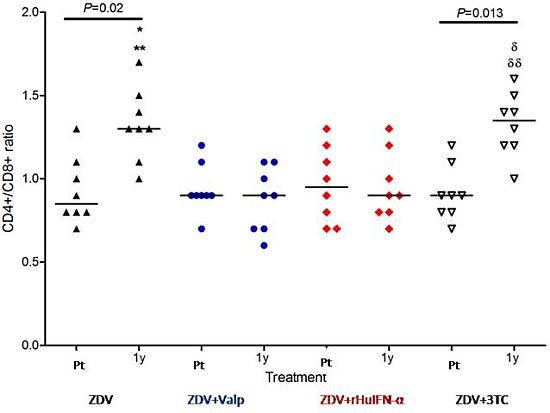