Prevalence of SARS-CoV-2 Variants of Concern and Variants of Interest in COVID-19 Breakthrough Infections in a Hospital in Monterrey, Mexico
Previous Article in Journal

Severe acute respiratory syndrome coronavirus 2 (SARS-CoV-2) is a highly transmissible RNA virus that causes COVID-19. Being aware of the presence of the virus on different types of surfaces and in different environments, and having a protocol for its detection, is important to understand the dynamics of the virus and its shedding patterns. In Ecuador, the detection of viral RNA in urban environmental samples has not been a priority. The present study analyzed samples from two densely populated neighborhoods and one public transportation system in Quito, Ecuador. Viral RNA presence was assessed using RT-LAMP. Twenty-eight out of 300 surfaces tested positive for SARS-CoV-2 RNA (9.33%). Frequently touched surfaces, especially in indoor spaces and on public transportation, were most likely to be positive for viral RNA. Positivity rate association for the two neighborhoods and for the surface type was not found. This study found viral RNA presence on urban surfaces; this information provides an insight into viral dissemination dynamics. Monitoring environmental SARS-CoV-2 could support the public health prevention strategies in Quito, Ecuador.
Keywords: COVID-19; coronavirus; environmental virus; SARS-CoV-2 RNA COVID-19; coronavirus; environmental virus; SARS-CoV-2 RNA

Severe acute respiratory syndrome coronavirus 2 (SARS-CoV-2) is a highly transmissible, positive-sense, single-stranded RNA virus [1]. It is the vector pathogen of the coronavirus disease 2019 (COVID-19), an illness characterized by fever, cough, and fatigue, which can develop into severe cases of pneumonia [2]. COVID-19 emerged in Wuhan, China, in November 2019, and has spread rapidly throughout the world. In March 2020, the disease was officially declared a pandemic by the World Health Organization [1]. Since then, a growing number of SARS-CoV-2 infections have imposed unprecedented pressure on the economic and healthcare systems of both developed and developing countries [3].
In Ecuador, the first official case of COVID-19 was reported in late February 2020, and measures taken by the Ecuadorian government to contain the virus included home confinement with the suspension of all non-essential activities [4]. However, during the following months, COVID-19 positive cases were reported throughout the country. The virus spread rapidly, especially within the largest cities, such as Guayaquil and Quito, and led to one of the worst excess in mortality per million inhabitants rates in the region [5]. As of 15 November 2021, the number of cases in Ecuador has continued to increase, with 519,560 confirmed cases of COVID-19 [1].
The high transmissibility of SARS-CoV-2 is a key factor explaining the persistence of COVID-19. The primary route of viral transmission is direct person-to-person contact, through respiratory droplets. Additionally, alternative routes of transmission have been proposed via indirect contact through fomites and SARS-CoV-2 positive surfaces, as large amounts of SARS-CoV-2 can cause some virus to remain viable on dry surfaces and in aerosols for long periods of time [1,6,7,8].
In previous studies, the stability of SARS-CoV-2 has been assessed in different environmental conditions. In general, under typical indoor environmental conditions, the virus is expected to survive for up to 3 days on non-porous surfaces, such as stainless steel, plastic, and glass [9]. However, the virus has been shown to be more stable on plastic and stainless steel, and viable viral particles have been recovered from these surfaces up to 21 days and 28 days after their contact with the virus, respectively [10,11]. These noteworthy extensive periods of viral recovery on surfaces have been reported under laboratory conditions. Nevertheless, the high inoculum viral concentration inputs, the inability to show a correlation between the viral RNA levels and infectious virus, the use of optimal temperature and humidity conditions that are favorable for virus survival, and UV light protection have been pointed out as biases in these studies [12].
SARS-CoV-2 RNA detection in the environment could be an indicator of viral shedding [13]. Being aware of viral presence is important, as human–virus cohabitation can have an impact on public health [14]. The dynamics of viral circulation and community composition in urban environments are still largely unknown. In order to gain more insight into viral dynamics, we must first be able to detect its presence [15].
In Ecuador, SARS-CoV-2 research has mainly been focused on identifying the virus in patient samples and sequencing the genomes of the different variants in circulation [16,17,18]; however, viral presence on surfaces has not been studied and is unknown. Therefore, the present study aimed to analyze the presence of SARS-CoV-2 RNA on surfaces in two neighborhoods and a public transportation system in Quito, Ecuador, through multiplex reverse-transcription loop-mediated isothermal amplification (RT-LAMP).

A total of 300 environmental samples were collected in the city of Quito, Ecuador, during August 2020 in two neighborhoods (Belisario Quevedo and Iñaquito) and one public transportation service (Figure 1, Table S1). The two selected neighborhoods are characterized by being highly commercial and densely populated, with approximately 42,000 to 46,000 inhabitants according to the latest population census [19]. In August 2020, Belisario Quevedo was one of the neighborhoods with the highest prevalence of COVID-19 cases (~935) in Quito, while Iñaquito had fewer cases (~241) [20]. The public transportation system we sampled is one of the most important in the city, with hundreds of thousands of passengers per year [21]. Within this public transportation system, different bus units in movement were sampled. The sampling sites were categorized into the following five major groups: (1) parks, (2) shops/business premises, (3) restaurants/minimarkets, (4) transportation, and (5) other public places (OPP), which included benches, bus stops, doorbells, handles, among other highly touched surfaces. Sampled surface materials included wood, metal, plastic, glass and ceramic. The environment type (indoor or outdoor) was also taken into account when sampling. These groupings were used as parameters for the statistical analyses (Table S1).

Chi-square and Fisher’s exact tests were used to analyze the positivity rates between neighborhoods, surface materials, environment types, and sampling sites depending on cell size. When entries included zeros or small numbers, chi-square test was used; otherwise, Fisher’s exact test was employed. Therefore, chi-square test was used for the categories ‘environment type’ and ‘neighborhood’, and Fisher’s exact test for ‘surface material’ and ‘sampling site’. Within the ‘sampling site’ category, chi-square test was used for comparisons between transportation and restaurants/minimarkets, shops/business premises and OPP, while Fisher’s exact test was used for all other comparisons. The strength of association between variables was measured by calculating Cramér’s V coefficient. Parameters were used as categorical independent variables in a logistic regression model to determine the effect of each variable on the presence/absence of SARS-CoV-2 RNA. Separate models were developed for each parameter and the association between variables was expressed as odds ratios (ORs) with the respective 95% confidence intervals (CIs). Bivariate analyses and modeling were performed using R programming software version 3.6.3 (R Foundation for Statistical Computing, Vienna, Austria).

The overall SARS-CoV-2 positivity rate was 9.33% (28/300 samples) (Figure 1). Highly touched public transport surfaces were the most likely to be SARS-CoV-2 positive, followed by restaurants/minimarkets, OPP, and shops/business premises (Figure 2A). No surface contamination with SARS-CoV-2 RNA was detected in parks. Positive samples were collected from the pen shaft of a minimarket counter, the elevator button and bathroom door handle of a shopping mall, the bench of a bus stop, two house doorbells, the counter of a stationery shop, and the table, chair, freezer and metal bars of restaurants or small food businesses. Regarding transport units, 13 metal and 4 plastic bus handles were positive for SARS-CoV-2 RNA. Of these, 22 samples were collected from indoor environments and 6 from outdoor environments (Figure 2B).

This research was funded by the Universidad San Francisco “Fondos COCIBA” grant and supported by a donation from Dr. Forest Rohwer (SDSU Biology Department).

The data presented in this study are available in Table S1.

We would like to thank Pablo Alarcón for his assistance with the sampling sites map design. The authors would like to thank Gabriel Trueba, Paúl Cárdenas, the Rohwer lab, and the Information Institute (VII) investigators: Barbara Bailey, Naveen Vaidya, and Angelica Bloomquist for their technical assistance, support, and valuable insights.

The authors declare no conflict of interest. The funders had no role in the design of the study; the collection, analyses, or interpretation of data; the writing of the manuscript, or in the decision to publish the results. 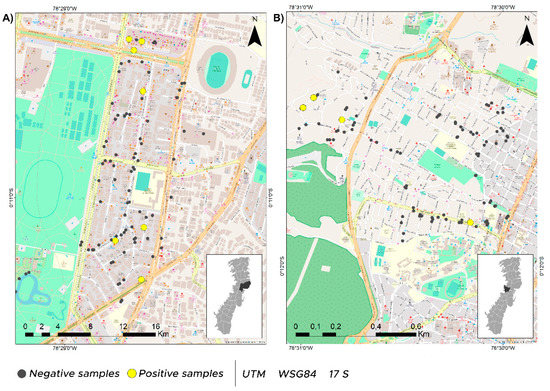 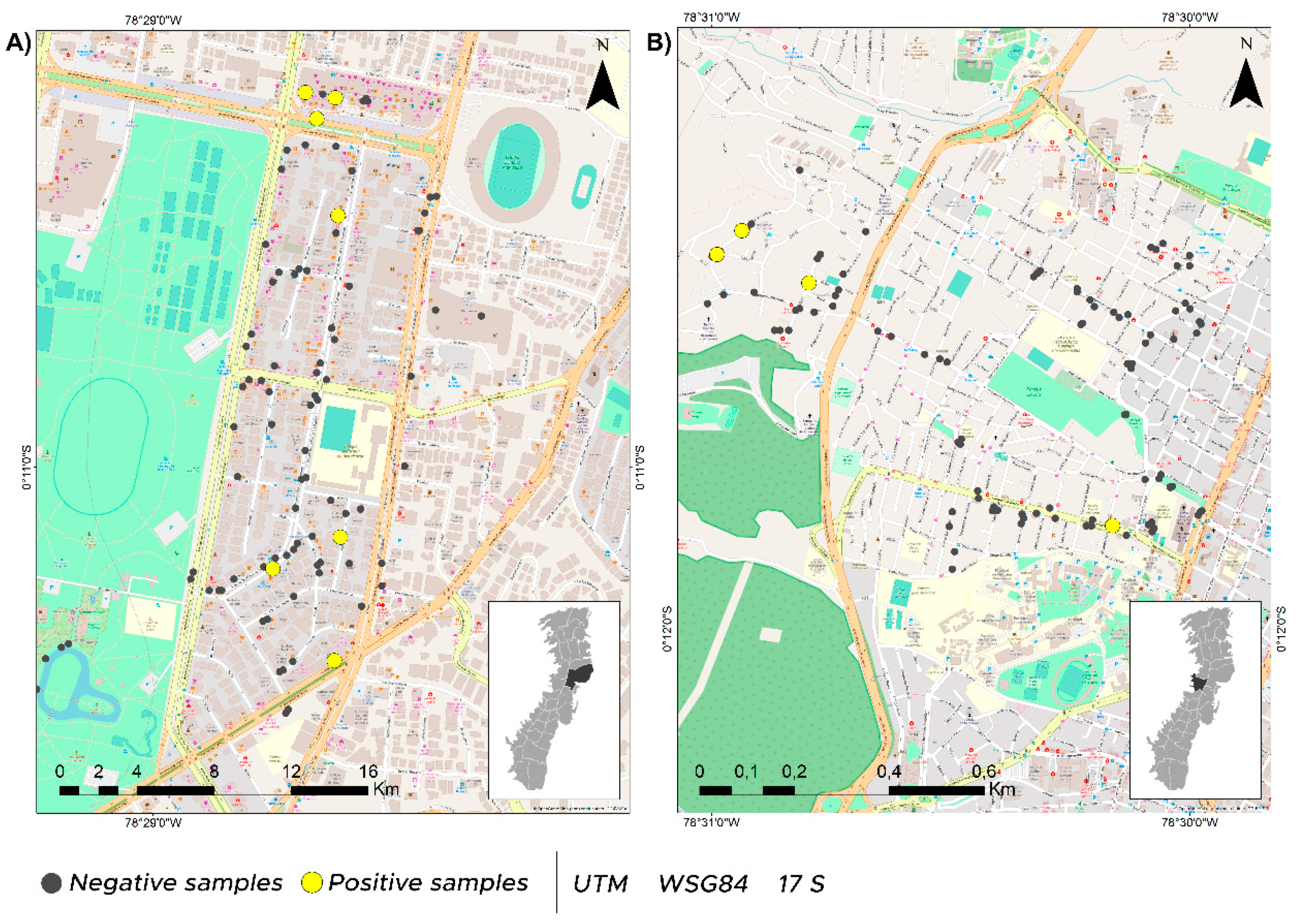