Real-Time Genomic Surveillance during the 2021 Re-Emergence of the Yellow Fever Virus in Rio Grande do Sul State, Brazil
Previous Article in Journal

The Algerian Chapter of SARS-CoV-2 Pandemic: An Evolutionary, Genetic, and Epidemiological Prospect

Brazil was considered one of the emerging epicenters of the coronavirus pandemic in 2021, experiencing over 3000 daily deaths caused by the virus at the peak of the second wave. In total, the country had more than 20.8 million confirmed cases of COVID-19, including over 582,764 fatalities. A set of emerging variants arose in the country, some of them posing new challenges for COVID-19 control. The goal of this study was to describe mutational events across samples from Brazilian SARS-CoV-2 sequences publicly obtainable on Global Initiative on Sharing Avian Influenza Data-EpiCoV (GISAID-EpiCoV) platform and to generate indexes of new mutations by each genome. A total of 16,953 SARS-CoV-2 genomes were obtained, which were not proportionally representative of the five Brazilian geographical regions. A comparative sequence analysis was conducted to identify common mutations located at 42 positions of the genome (38 were in coding regions, whereas two were in 5′ and two in 3′ UTR). Moreover, 11 were synonymous variants, 27 were missense variants, and more than 44.4% were located in the spike gene. Across the total of single nucleotide variations (SNVs) identified, 32 were found in genomes obtained from all five Brazilian regions. While a high genomic diversity has been reported in Europe given the large number of sequenced genomes, Africa has demonstrated high potential for new variants. In South America, Brazil, and Chile, rates have been similar to those found in South Africa and India, providing enough “space” for new mutations to arise. Genomic surveillance is the central key to identifying the emerging variants of SARS-CoV-2 in Brazil and has shown that the country is one of the “hotspots” in the generation of new variants. View Full-Text
Keywords: SARS-CoV-2; variants hotspot; genome analysis; viral evolution; mathematical correlation SARS-CoV-2; variants hotspot; genome analysis; viral evolution; mathematical correlation
►▼ Show Figures 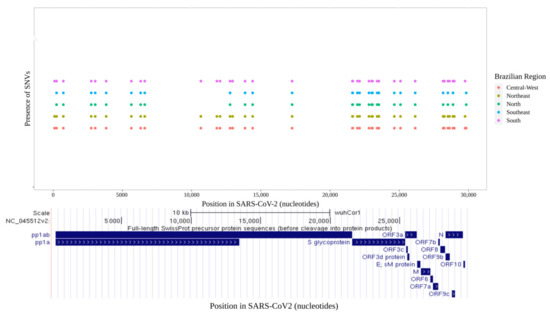