:
Bats have been identified as the natural hosts of several emerging zoonotic viruses, including paramyxoviruses, such as Hendra and Nipah viruses, that can cause fatal disease in humans. Recently, African fruit bats with populations that roost in or near urban areas have been shown to harbour a great diversity of paramyxoviruses, posing potential spillover risks to public health. Understanding the circulation of these viruses in their reservoir populations is essential to predict and prevent future emerging diseases. Here, we identify a high incidence of multiple paramyxoviruses in urine samples collected from a closed captive colony of circa 115 straw-coloured fruit bats (Eidolon helvum). The sequences detected have high nucleotide identities with those derived from free ranging African fruit bats and form phylogenetic clusters with the Henipavirus genus, Pararubulavirus genus and other unclassified paramyxoviruses. As this colony had been closed for 5 years prior to this study, these results indicate that within-host paramyxoviral persistence underlies the role of bats as reservoirs of these viruses.
Keywords:
chiroptera; Pteropodidae; longitudinal study; Henipavirus; Pararubulavirus

Most emerging infectious diseases presenting threats to public health are zoonoses originating in wildlife [1]. Understanding the ecology of zoonotic, or potentially zoonotic, viruses in their natural hosts is essential to predict and prevent disease emergence [2]. Natural hosts of an infectious agent are those that have co-evolved with the pathogen and are infected in nature without human intervention [3]. Several studies have identified bats as the most likely natural hosts for multiple emerging zoonotic viruses with high case fatality rates, such as SARS-like coronaviruses, Ebola and Marburg filoviruses, lyssaviruses and a range of paramyxoviruses (PVs) [3,4,5]. It has been hypothesised that bats share unique traits that enhance their potential as viral reservoirs such as long lifespans, large population sizes, high spatial mobility and high sympatry, which provides opportunities for pathogen persistence and for intra- and interspecific transmission of infectious agents [6,7].
Within the Paramyxoviridae, viruses in the Orthoparamyxovirinae and Rubulavirinae subfamilies have been detected in bats, and some of these have been associated with serious emerging zoonotic diseases [8]. Hendra and Nipah viruses (genus Henipavirus) were first detected in the 1990s after severe outbreaks of disease in domestic animals and humans. Hendra virus (HeV) was identified in Australia in 1994 causing fatal pneumonia and encephalitis in horses and humans [8]. Several variants of HeV were found to be widespread in Australian fruit bats (Pteropus spp.) and outbreaks of disease have occurred almost every year since its identification [9]. Nipah virus (NiV) emerged in Malaysia in 1998 causing fatal respiratory disease and encephalitis in pigs and humans [10]. Similarly, NiV was later detected in fruit bats (Pteropus spp.) in Malaysia and, subsequently, from pteropid bats elsewhere in South and Southeast Asia. Nipah virus continues to cause recurrent disease outbreaks in Bangladesh with proved bat-to-human and human-to-human transmission [11,12]. Therefore, fruit bats of the genus Pteropus are widely recognised as the natural reservoirs for HeV and NiV and their distribution was assumed to limit the range of henipaviruses [13].
Following HeV and NiV emergence, enhanced surveillance for potential pathogens associated with bats led to the discovery of a greater diversity of PVs in these taxa [14,15,16,17,18,19]. In 2008, henipavirus antibodies were found in the straw-coloured fruit bat (Eidolon helvum), a species of pteropodid bat, in Ghana without sympatry with the suspected Pteropus reservoirs [20]. Subsequent studies have detected several henipa-like virus sequences in faeces, urine and tissues of E. helvum and other African fruit bats [14,15,18]. Although the isolation and culture of African henipaviruses have not yet been achieved, a full genome sequence was obtained from E. helvum in Ghana, confirming its classification within the genus Henipavirus [14,21,22]. Despite evidence of African henipavirus spillover into humans [23], the potential to cause disease is unclear.
In addition, bat PVs in the subfamily Rubulavirinae have been recently discovered with unknown consequences for human or animal health. Menangle virus was isolated in Australia after an outbreak of reproductive disease in pigs, being later detected in humans with a febrile illness and in apparently healthy Pteropus sp. fruit bats [24]. Tioman virus was identified in Malaysian fruit bats with evidence of spillover to humans [25]. Furthermore, in 2008, three pararubulaviruses, or Tuhoko viruses, were isolated from fruit bat faeces in China [26], while three pararubulaviruses, Achimota pararubulavirus 1, 2 and 3 (AchPV1, AchPV2 and AchPV3), have been recently described in an urban population of E. helvum in Ghana [19,27]. There is widespread seropositivity to AchPV1 and to AchPV2 in E. helvum across sub-Saharan Africa, while antibodies to AchPV2 have been detected in people in Ghana [19]. While the clinical implications of zoonotic infection are unknown, experimental infections of ferrets with AchPV1 and AchPV2 were associated with respiratory disease [28].
Eidolon helvum is widely distributed throughout sub-Saharan Africa and it is the bat species most hunted for bushmeat in West Africa [29]. This species frequently forms large colonies in urban areas such as one that roosts in central Accra, Ghana containing up to one million individuals. The circulation of multiple PVs, including henipaviruses and pararubulaviruses, has been confirmed in this large urban population [14,15,19,30]. In January 2010, bats caught from the Accra colony were used to establish a closed captive colony of E. helvum in the vicinity of Accra Zoo with mesh double-walls, ground-level cladding and a solid roof to preclude direct or indirect contact with wild bats or other animals [31]. The captive colony was established with 77 bats of mixed age and sex and has been breeding successfully ever since. By April 2015, the colony had reached approximately 115 individuals through births only. Serological studies using a multiplexed microsphere assay demonstrated the presence of antibodies against henipaviruses in the colony over 24 months since the colony was closed, with evidence of maternal antibodies and later seroconversion in juveniles [31]. Additionally, using a NiV antibody binding assay, antibodies were detected from 2009 to 2017 with an average seroprevalence of 60.5% [32,33]. Longitudinal seroepidemiology shows indirect evidence for PV transmission within the colony [33], but virus detection had not been attempted to date. In this study, we aim to detect and characterise the PVs circulating in the E. helvum captive colony, using under-roost urine samples. The molecular examination of urine samples has been shown to be an effective way of detecting a range of PVs, including henipaviruses, excreted by fruit bats, including E. helvum [15,34].

PAR- and RMH-PCR assays produced seventeen and sixty-eight amplicons, respectively, from the urine samples tested (Table 1, Figure 2). Upon alignment, nine distinct sequences were identified (Table S3), with close phylogenetic relationships between most sequences and with known PV sequences previously reported from E. helvum bats (Figure 3 and Figure 4). Three distinct sequences, Z15-U17P, Z15-U27P and Z15-U111P (Genbank MZ393370-2) were obtained using the PAR-PCR assay and six distinct sequences, Z15-12R, Z15-U17R, Z15-U27R, Z15-U78R, Z15-U86R and Z15-U115R (Genbank MZ393364-9) were obtained using the RMH-PCR assay.
The three sequences obtained using the PAR-PCR assay were located within three distinct clades throughout the Paramyxoviridae phylogeny (Figure 3). Sequences Z15-U17P and Z15-U27P showed high nucleotide identities (>95%) with previously detected sequences derived from E. helvum bats in Zambia [2] and Ghana [15], respectively. Sequence Z15-U17P grouped in the Henipavirus genus exhibiting 74.2% and 72.9% homology to NiV and HeV, respectively, whilst sequence Z15-U27P grouped with other henipa-related viral sequences. Sequence Z15-U111P clustered within a phylogenetically diverse subgroup of the Pararubulavirus genus that included AchPV1 and had 98% nucleotide identity with clones U69C/D [15] derived from Ghana.
Six distinct sequences were obtained with the RMH-PCR assay and these were scattered throughout the phylogenetic tree (Figure 4). Sequence Z15-U17R was located within the Henipavirus clade, while the other sequences were in diverse subgroups phylogenetically related to the henipaviruses. All sequences showed high nucleotide identities (>95%) with previously published sequences derived from E. helvum bats in Ghana, Gabon or the Republic of Congo [14,15,41], except for Z15-U115R, which is novel, having only 76% similarity to the nearest known sequences, those of clones (U58B and U32A) derived from E. helvum in Ghana [15].
Six of the nine sequences were detected during more than one sampling time point (Figure 2), with sequence Z15-U12R being the most frequently detected, in 13 out of 23 time points. Multiple sequences were most frequently observed during the mid-June time points.

This research was funded by Research England, the Royal Veterinary College, the Medical Research Council (grant number MR/P025226/1) and the Defense Advanced Research Projects Agency (DARPA) administered through Cooperative Agreement #D18AC00031-PREEMPT. JLNW and OR are funded by The Alborada Trust. AAC was part-funded by a Royal Society Wolfson Research Merit award.

Data is contained within the article or Supplementary Materials.

We thank the Forestry Commission of Ghana for permitting the collection of the samples; Aaron Morris, for generating Figure 2; and Chris Yesson, Institute of Zoology, for his support on generating the phylogenetic trees used in Figure 3 and Figure 4. Louise Gibson took the photograph used for Figure 1. 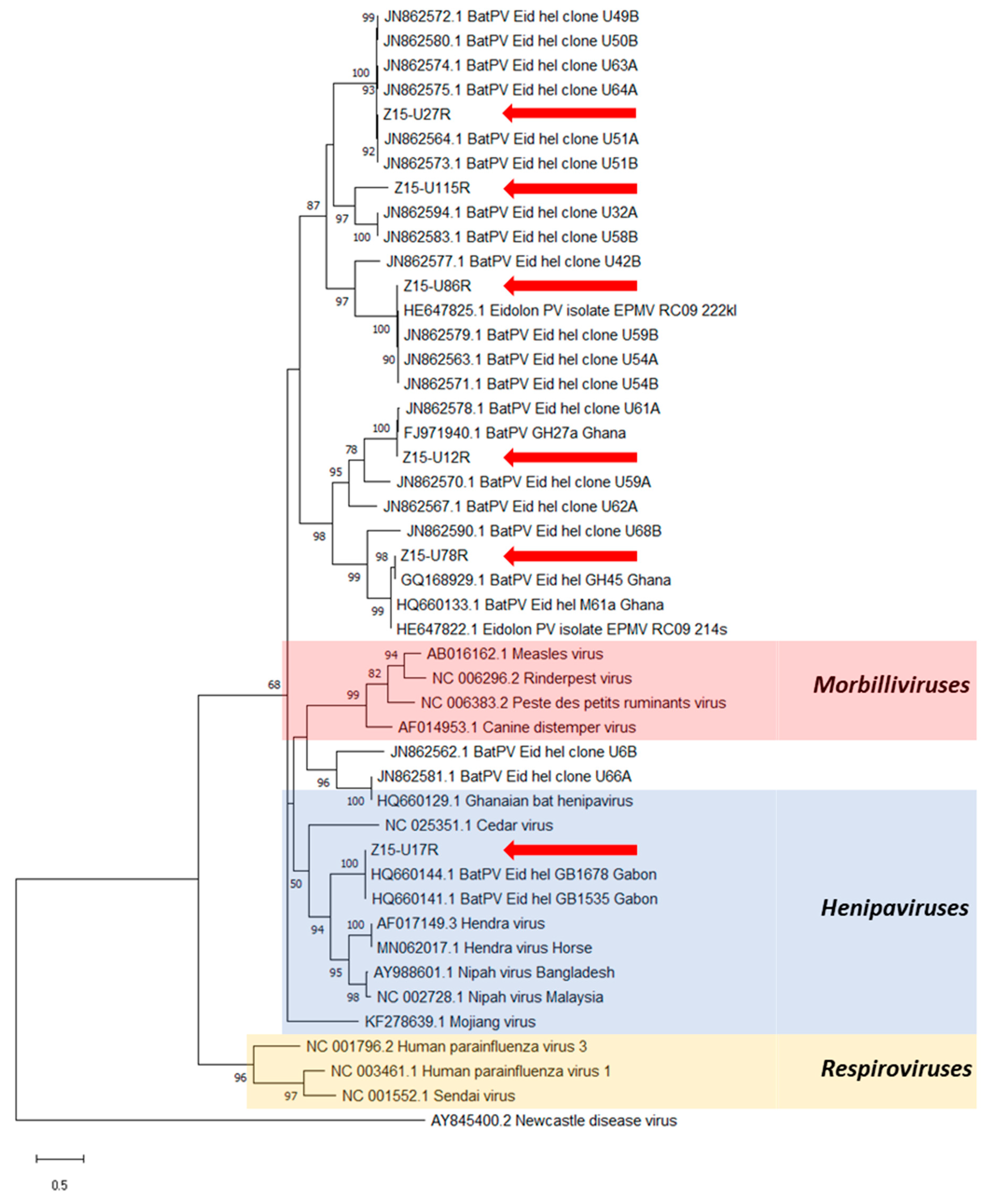