The straw-coloured fruit bat (Eidolon helvum) is widespread in sub-Saharan Africa and is widely hunted for bushmeat. It is known to harbour a range of paramyxoviruses, including rubuloviruses and henipaviruses, but the zoonotic potential of these is unknown. We previously found a diversity of paramyxoviruses within a small, captive colony of E. helvum after it had been closed to contact with other bats for 5 years. In this study, we used under-roost urine collection to further investigate the paramyxovirus diversity and ecology in this colony, which had been closed to the outside for 10 years at the time of sampling. By sampling urine weekly throughout an entire year, we investigated possible seasonal patterns of shedding of virus or viral RNA. Using a generic paramyxovirus L-gene PCR, we detected eight distinct paramyxovirus RNA sequences. Six distinct sequences were detected using a Henipavirus-specific PCR that targeted a different region of the L-gene. Sequence detection had a bi-annual pattern, with the greatest peak in July, although different RNA sequences appeared to have different shedding patterns. No significant associations were detected between sequence detection and birthing season, environmental temperature or humidity, and no signs of illness were detected in any of the bats in the colony during the period of sample collection. View Full-Text
Keywords: chiroptera; Pteropodidae; Henipavirus; Paramyxoviridae; Rubulavirus; persistence chiroptera; Pteropodidae; Henipavirus; Paramyxoviridae; Rubulavirus; persistence
►▼ Show Figures 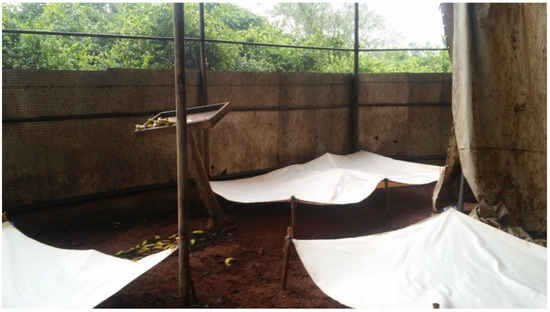