Bacteriophage Therapy for Difficult-to-Treat Infections: The Implementation of a Multidisciplinary Phage Task Force (The PHAGEFORCE Study Protocol)
Next Article in Special Issue

Proposed Update to the Taxonomy of Pestiviruses: Eight Additional Species within the Genus Pestivirus, Family Flaviviridae

Donald B. Smith
2 and

Pestiviruses are plus-stranded RNA viruses belonging to the family Flaviviridae. They comprise several important pathogens like classical swine fever virus and bovine viral diarrhea virus that induce economically important animal diseases. In 2017, the last update of pestivirus taxonomy resulted in demarcation of 11 species designated Pestivirus A through Pestivirus K. Since then, multiple new pestiviruses have been reported including pathogens associated with disease in pigs or small ruminants. In addition, pestivirus sequences have been found during metagenomics analysis of different non-ungulate hosts (bats, rodents, whale, and pangolin), but the consequences of this pestivirus diversity for animal health still need to be established. To provide a systematic classification of the newly discovered viruses, we analyzed the genetic relationship based on complete coding sequences (cds) and deduced polyprotein sequences and calculated pairwise distances that allow species demarcation. In addition, phylogenetic analysis was performed based on a highly conserved region within the non-structural protein NS5B. Taking into account the genetic relationships observed together with available information about antigenic properties, host origin, and characteristics of disease, we propose to expand the number of pestivirus species to 19 by adding eight additional species designated Pestivirus L through Pestivirus S. View Full-Text
Keywords: Flaviviridae; pestivirus; taxonomy; species; genetic distances; phylogenetic analysis Flaviviridae; pestivirus; taxonomy; species; genetic distances; phylogenetic analysis
►▼ Show Figures 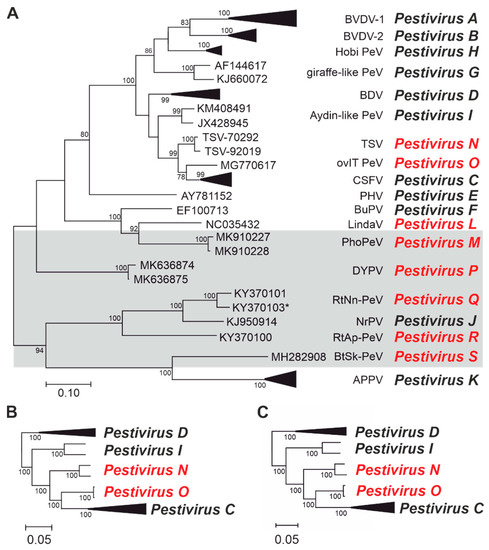