Rise and Fall of SARS-CoV-2 Lineage A.27 in Germany

Exploring the Diversity of the Human Blood Virome

Metagenomics is greatly improving our ability to discover new viruses, as well as their possible associations with disease. However, metagenomics has also changed our understanding of viruses in general. The vast expansion of currently known viral diversity has revealed a large fraction of non-pathogenic viruses, and offers a new perspective in which viruses function as important components of many ecosystems. In this vein, studies of the human blood virome are often motivated by the search for new viral diseases, especially those associated with blood transfusions. However, these studies have revealed the common presence of apparently non-pathogenic viruses in blood, particularly human anelloviruses and, to a lower extent, human pegiviruses (HPgV). To shed light on the diversity of the human blood virome, we subjected pooled plasma samples from 587 healthy donors in Spain to a viral enrichment protocol, followed by massive parallel sequencing. This showed that anelloviruses were clearly the major component of the blood virome and showed remarkable diversity. In total, we assembled 332 complete or near-complete anellovirus genomes, 50 of which could be considered new species. HPgV was much less frequent, but we, nevertheless, recovered 17 different isolates that we subsequently used for characterizing the diversity of this virus. In-depth investigation of the human blood virome should help to elucidate the ecology of these viruses, and to unveil potentially associated diseases. View Full-Text
Keywords: orphan virus; blood virome; anellovirus; pegivirus; virus discovery; metagenomics orphan virus; blood virome; anellovirus; pegivirus; virus discovery; metagenomics
►▼ Show Figures 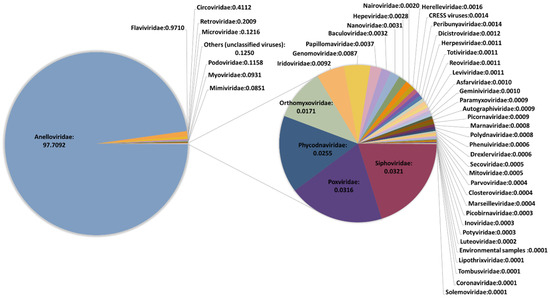 José M. Cuevas
not included
Zoom | Orient | As Lines | As Sticks | As Cartoon | As Surface | Previous Scene | Next Scene
We use cookies on our website to ensure you get the best experience. Read more about our cookies here.
Accept
We have just recently launched a new version of our website. Help us to further improve by taking part in this short 5 minute survey here. here.
Never show this again