Hearing loss, one of the most prevalent chronic health conditions, affects around half a billion people worldwide, including 34 million children. The World Health Organization estimates that the prevalence of disabling hearing loss will increase to over 900 million people by 2050. Many cases of congenital hearing loss are triggered by viral infections during different stages of pregnancy. However, the molecular mechanisms by which viruses induce hearing loss are not sufficiently explored, especially cases that are of embryonic origins. The present review first describes the cellular and molecular characteristics of the auditory system development at early stages of embryogenesis. These developmental hallmarks, which initiate upon axial specification of the otic placode as the primary root of the inner ear morphogenesis, involve the stage-specific regulation of several molecules and pathways, such as retinoic acid signaling, Sonic hedgehog, and Wnt. Different RNA and DNA viruses contributing to congenital and acquired hearing loss are then discussed in terms of their potential effects on the expression of molecules that control the formation of the auditory and vestibular compartments following otic vesicle differentiation. Among these viruses, cytomegalovirus and herpes simplex virus appear to have the most effect upon initial molecular determinants of inner ear development. Moreover, of the molecules governing the inner ear development at initial stages, SOX2, FGFR3, and CDKN1B are more affected by viruses causing either congenital or acquired hearing loss. Abnormalities in the function or expression of these molecules influence processes like cochlear development and production of inner ear hair and supporting cells. Nevertheless, because most of such virus–host interactions were studied in unrelated tissues, further validations are needed to confirm whether these viruses can mediate the same effects in physiologically relevant models simulating otic vesicle specification and growth. View Full-Text
Keywords: hearing loss; viruses; embryogenesis; inner ear formation; auditory system development hearing loss; viruses; embryogenesis; inner ear formation; auditory system development
►▼ Show Figures 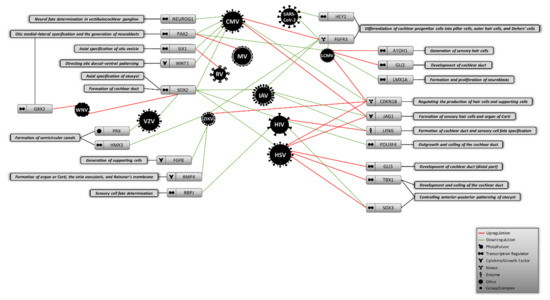