Sonoran felids are threatened by drought and habitat fragmentation. Vector range expansion and anthropogenic factors such as habitat encroachment and climate change are altering viral evolutionary dynamics and exposure. However, little is known about the diversity of viruses present in these populations. Small felid populations with lower genetic diversity are likely to be most threatened with extinction by emerging diseases, as with other selective pressures, due to having less adaptive potential. We used a metagenomic approach to identify novel circoviruses, which may have a negative impact on the population viability, from confirmed bobcat (Lynx rufus) and puma (Puma concolor) scats collected in Sonora, Mexico. Given some circoviruses are known to cause disease in their hosts, such as porcine and avian circoviruses, we took a non-invasive approach using scat to identify circoviruses in free-roaming bobcats and puma. Three circovirus genomes were determined, and, based on the current species demarcation, they represent two novel species. Phylogenetic analyses reveal that one circovirus species is more closely related to rodent associated circoviruses and the other to bat associated circoviruses, sharing highest genome-wide pairwise identity of approximately 70% and 63%, respectively. At this time, it is unknown whether these scat-derived circoviruses infect felids, their prey, or another organism that might have had contact with the scat in the environment. Further studies should be conducted to elucidate the host of these viruses and assess health impacts in felids. View Full-Text
Keywords: Circoviridae; circoviruses; bobcat; Lynx rufus; Sonoran Desert; Sonoran felid associated (Sonfela) circoviruses Circoviridae; circoviruses; bobcat; Lynx rufus; Sonoran Desert; Sonoran felid associated (Sonfela) circoviruses
►▼ Show Figures 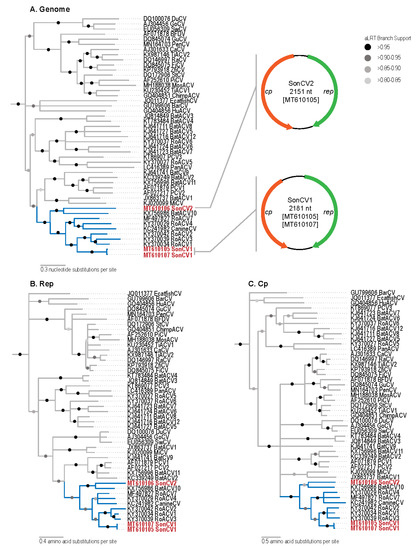