Circoviruses infect a variety of animal species and have small (~1.8–2.2 kb) circular single-stranded DNA genomes. Recently a penguin circovirus (PenCV) was identified associated with an Adélie Penguin (Pygoscelis adeliae) with feather disorder and in the cloacal swabs of three asymptomatic Adélie Penguins at Cape Crozier, Antarctica. A total of 75 cloacal swab samples obtained from adults and chicks of three species of penguin (genus: Pygoscelis) from seven Antarctic breeding colonies (South Shetland Islands and Western Antarctic Peninsula) in the 2015−2016 breeding season were screened for PenCV. We identified new variants of PenCV in one Adélie Penguin and one Chinstrap Penguin (Pygoscelis antarcticus) from Port Charcot, Booth Island, Western Antarctic Peninsula, a site home to all three species of Pygoscelid penguins. These two PenCV genomes (length of 1986 nucleotides) share > 99% genome-wide nucleotide identity with each other and share ~87% genome-wide nucleotide identity with the PenCV sequences described from Adélie Penguins at Cape Crozier ~4400 km away in East Antarctica. We did not find any evidence of recombination among PenCV sequences. This is the first report of PenCV in Chinstrap Penguins and the first detection outside of Ross Island, East Antarctica. Given the limited knowledge on Antarctic animal viral diversity, future samples from Antarctic wildlife should be screened for these and other viruses to determine the prevalence and potential impact of viral infections. View Full-Text
Keywords: circovirus; penguins; Antarctica; Pygoscelis antarcticus; Pygoscelis adeliae circovirus; penguins; Antarctica; Pygoscelis antarcticus; Pygoscelis adeliae
►▼ Show Figures 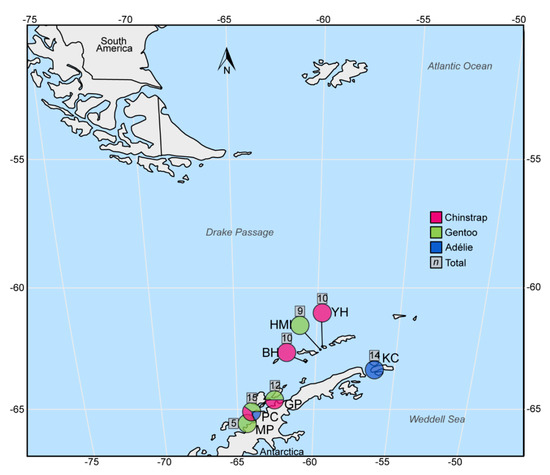