Human BK polyomavirus (BKPyV) prevalence has been increasing due to the introduction of more potent immunosuppressive agents in transplant recipients, and its clinical interest. BKPyV has been linked mostly to polyomavirus-associated hemorrhagic cystitis, in allogenic hematopoietic stem cell transplant, and polyomavirus-associated nephropathy in kidney transplant patients. BKPyV is a circular double-stranded DNA virus that encodes for seven proteins, of which Viral Protein 1 (VP1), the major structural protein, has been extensively used for genotyping. BKPyV also contains the noncoding control region (NCCR), configured by five repeat blocks (OPQRS) known to be highly repetitive and diverse, and linked to viral infectivity and replication. BKPyV genetic diversity has been mainly studied based on the NCCR and VP1, due to the high occurrence of BKPyV-associated diseases in transplant patients and their clinical implications. Here BKTyper is presented, a free online genotyper for BKPyV, based on a VP1 genotyping and a novel algorithm for NCCR block identification. VP1 genotyping is based on a modified implementation of the BK typing and grouping regions (BKTGR) algorithm, providing a maximum-likelihood phylogenetic tree using a custom internal BKPyV database. Novel NCCR block identification relies on a minimum of 12-bp motif recognition and a novel sorting algorithm. A graphical representation of the OPQRS block organization is provided. View Full-Text
Keywords: Human BK polyomavirus (BKPyV); VP1; BKTGR; NCCR; genotyping Human BK polyomavirus (BKPyV); VP1; BKTGR; NCCR; genotyping
►▼ Show Figures 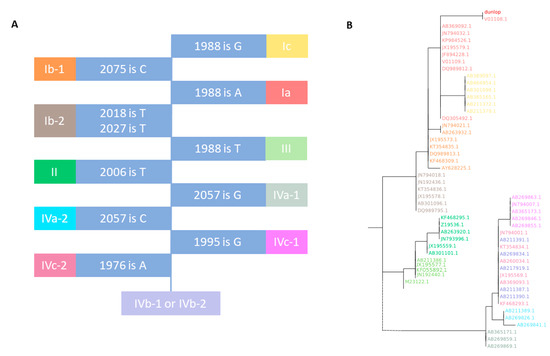