aBravo Is a Novel Aedes aegypti Antiviral Protein That Interacts with, but Acts Independently of, the Exogenous siRNA Pathway Effector Dicer 2

Research on the ecology and evolution of viruses is often hampered by the limitation of sequence information to short parts of the genomes or single genomes derived from cultures. In this study, we use hybrid sequence capture enrichment in combination with high-throughput sequencing to provide efficient access to full genomes of European hantaviruses from rodent samples obtained in the field. We applied this methodology to Tula (TULV) and Puumala (PUUV) orthohantaviruses for which analyses from natural host samples are typically restricted to partial sequences of their tri-segmented RNA genome. We assembled a total of ten novel hantavirus genomes de novo with very high coverage (on average >99%) and sequencing depth (average >247×). A comparison with partial Sanger sequences indicated an accuracy of >99.9% for the assemblies. An analysis of two common vole (Microtus arvalis) samples infected with two TULV strains each allowed for the de novo assembly of all four TULV genomes. Combining the novel sequences with all available TULV and PUUV genomes revealed very similar patterns of sequence diversity along the genomes, except for remarkably higher diversity in the non-coding region of the S-segment in PUUV. The genomic distribution of polymorphisms in the coding sequence was similar between the species, but differed between the segments with the highest sequence divergence of 0.274 for the M-segment, 0.265 for the S-segment, and 0.248 for the L-segment (overall 0.258). Phylogenetic analyses showed the clustering of genome sequences consistent with their geographic distribution within each species. Genome-wide data yielded extremely high node support values, despite the impact of strong mutational saturation that is expected for hantavirus sequences obtained over large spatial distances. We conclude that genome sequencing based on capture enrichment protocols provides an efficient means for ecological and evolutionary investigations of hantaviruses at an unprecedented completeness and depth. View Full-Text
Keywords: hybrid sequence capture; virus genomes; targeted enrichment; high-throughput deep sequencing; de novo assembly; hantavirus phylogeny; evolutionary history; rodent-borne viruses hybrid sequence capture; virus genomes; targeted enrichment; high-throughput deep sequencing; de novo assembly; hantavirus phylogeny; evolutionary history; rodent-borne viruses
►▼ Show Figures 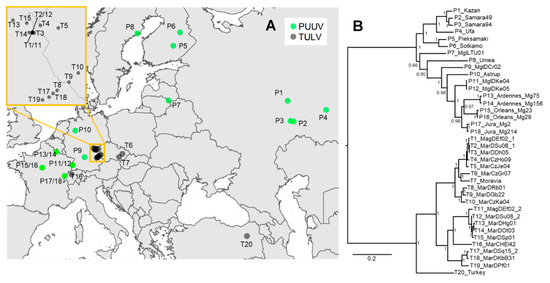