Metagenomic Detection of Two Vientoviruses in a Human Sputum Sample

Metagenomic techniques are increasingly being used for the identification of potential pathogens in samples that test negatively in routine clinical assays [1,2,3]. The advantage of this approach is that it does not require a prior assumption about a target pathogen and may be particularly useful when the patient might have been exposed to uncommon pathogens. The use of clinical metagenomics has increased the discovery rate of new viruses, many of them still unclassified, not associated with any known disease, and therefore not targeted by diagnostic tests [4].
The use of rolling circle amplification techniques, which are known to preferentially amplify the circular rep-encoding single stranded DNA (CRESS-DNA) viruses, has revealed a wide variety of new CRESS-DNA viruses present in human samples, including respiratory samples, pericardial liquid, cerebrospinal fluid, stools, and blood [5]. CRESS-DNA viruses are among the smallest sized viruses (2–3 kb) that infect eukaryotic cells. They are highly diverse and ubiquitous and are frequently found in metagenomic analyses of soils, water, and animal samples [6]. The CRESS-DNA viruses usually encode a replication initiation protein (Rep) and a capsid protein (Cap). They have mutation rates similar to those of RNA viruses and high recombination rates that make classification a difficult task. To date, only six families of CRESS-DNA viruses are recognized by the International Committee on Taxonomy of Viruses (ICTV) [6], although an update including ten families has been approved (https://talk.ictvonline.org/files/proposals/animal_dna_viruses_and_retroviruses/m/animal_dna_ec_approved/9354). Among these, Circoviridae, Bacilladnaviridae, and Smacoviridae have been found to infect animals, although a few are known to cause serious illness in vertebrates, e.g., porcine circovirus-2 [7].
In this work, we report the detection by metagenomics of two human respiratory viruses in a sample from a patient with respiratory symptoms. 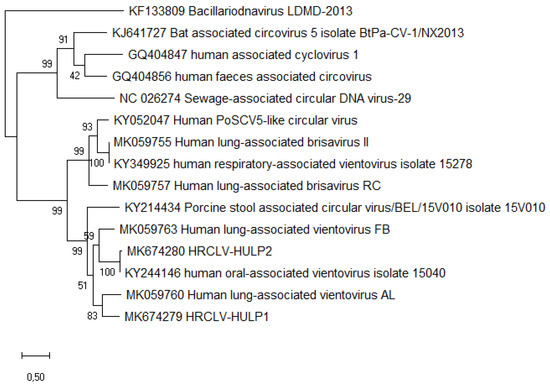