Antivirals Against Chikungunya Virus: Is the Solution in Nature?
Next Article in Special Issue

Background: Bats are known to host a number of nonpathogenic viruses, as well as highly pathogenic viruses causing fatal diseases like rabies. Serological surveys as part of active and passive bat rabies surveillance mainly use seroneutralization assays, demonstrating the presence of lyssavirus-specific antibodies in a variety of European bats, particularly against European bat lyssaviruses type 1 (EBLV-1). Here, we present the first serological survey in European bats of this kind during which European bats from Poland collected in the frame of passive rabies surveillance between 2012 and 2018, as well as Serotine bats (Eptesicus serotinus) and North American Big Brown bats (Eptesicus fuscus) from previous experimental studies, were tested using a commercial ELISA kit for the detection of anti-lyssavirus antibodies. Results: Lyssavirus-specific antibodies were detected in 35 (30.4%) out of 115 Polish bats of both sexes, representing nine out of 13 identified bat species endemic mainly to Central Southern Europe and Western Asia, i.e., Eptesicus serotinus, Nyctalus noctula, Myotis daubentonii, Plecotus auritus, Vespertillo murinus,Pipistrellus pipistrellus, Pipistrellus pipilstrellus/Pipistrellus pygmaeus, Myotis brandtii, and Barbastella barbastellus. Seroprevalence was highest in bat species of Nyctalus noctula, Eptesicus serotinus, Plecotus auritus, and Myotis daubentonii. More than 60% of the ELISA seropositive bats originated from the voivodeships of Silesia, Lower-Silesian, Warmian-Mazurian, and Mazowian. Rabies-specific antibodies were also found in Eptesicus fuscus bats from North America. Conclusions: The study demonstrates the principal application of the BioPro Rabies ELISA Ab Kit for the detection of anti-lyssavirus specific antibodies in body fluids and serum samples of bats. However, results may only be reliable for North American bats, whereas interpretation of results for European bats per se is difficult because proper validation of the test is hampered by the protected status of these species. View Full-Text
Keywords: rabies; lyssaviruses; seroprevalence; bats; Poland; ELISA rabies; lyssaviruses; seroprevalence; bats; Poland; ELISA
►▼ Show Figures 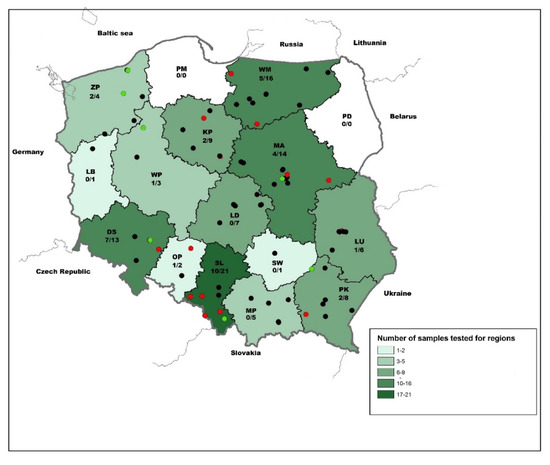