Geminiviruses possess single-stranded, circular DNA genomes and control the transcription of their late genes, including BV1 of many bipartite begomoviruses, through transcriptional activation by the early expressing AC2 protein. DNA binding by AC2 is not sequence-specific; hence, the specificity of AC2 activation is thought to be conferred by plant transcription factors (TFs) recruited by AC2 in infected cells. However, the exact TFs AC2 recruits are not known for most viruses. Here, we report a systematic examination of the BV1 promoter (PBV1) of the mungbean yellow mosaic virus (MYMV) for conserved promoter motifs. We found that MYMV PBV1 contains three abscisic acid (ABA)-responsive elements (ABREs) within its first 70 nucleotides. Deleting these ABREs, or mutating them all via site-directed mutagenesis, abolished the capacity of PBV1 to respond to AC2-mediated transcriptional activation. Furthermore, ABRE and other related ABA-responsive elements were prevalent in more than a dozen Old World begomoviruses we inspected. Together, these findings suggest that ABA-responsive TFs may be recruited by AC2 to BV1 promoters of these viruses to confer specificity to AC2 activation. These observations are expected to guide the search for the actual TF(s), furthering our understanding of the mechanisms of AC2 action. View Full-Text
Keywords: geminivirus; bipartite begomovirus; transcriptional trans-activation; abscisic acid; promoter motifs; AC2; BV1; mungbean yellow mosaic virus geminivirus; bipartite begomovirus; transcriptional trans-activation; abscisic acid; promoter motifs; AC2; BV1; mungbean yellow mosaic virus
►▼ Show Figures 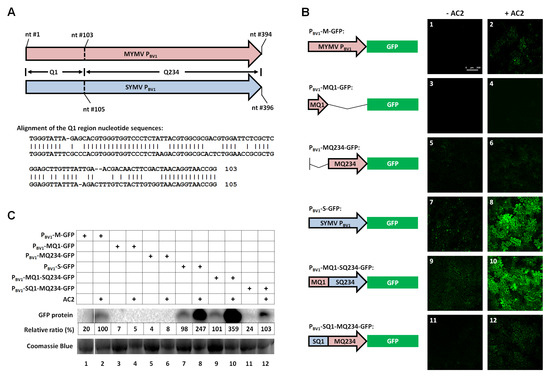