An Unconventional Flavivirus and Other RNA Viruses in the Sea Cucumber (Holothuroidea; Echinodermata) Virome

A Functional K+ Channel from Tetraselmis Virus 1, a Member of the Mimiviridae

Potassium ion (K+) channels have been observed in diverse viruses that infect eukaryotic marine and freshwater algae. However, experimental evidence for functional K+ channels among these alga-infecting viruses has thus far been restricted to members of the family Phycodnaviridae, which are large, double-stranded DNA viruses within the phylum Nucleocytoviricota. Recent sequencing projects revealed that alga-infecting members of Mimiviridae, another family within this phylum, may also contain genes encoding K+ channels. Here we examine the structural features and the functional properties of putative K+ channels from four cultivated members of Mimiviridae. While all four proteins contain variations of the conserved selectivity filter sequence of K+ channels, structural prediction algorithms suggest that only two of them have the required number and position of two transmembrane domains that are present in all K+ channels. After in vitro translation and reconstitution of the four proteins in planar lipid bilayers, we confirmed that one of them, a 79 amino acid protein from the virus Tetraselmis virus 1 (TetV-1), forms a functional ion channel with a distinct selectivity for K+ over Na+ and a sensitivity to Ba2+. Thus, virus-encoded K+ channels are not limited to Phycodnaviridae but also occur in the members of Mimiviridae. The large sequence diversity among the viral K+ channels implies multiple events of lateral gene transfer. View Full-Text
Keywords: viral K+ channel; Kcv; K+ channel evolution; Phycodnaviridae; Mimiviridae viral K+ channel; Kcv; K+ channel evolution; Phycodnaviridae; Mimiviridae
►▼ Show Figures 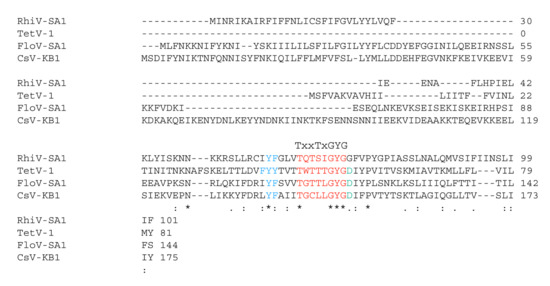