:
Influenza A virus (IAV) exploits host factors to multiply and cause disease. An in-depth knowledge of this interaction of IAV with the host will aid the development of anti-IAV intervention strategies. Previously, we demonstrated that host cortactin, an actin filament-binding protein promotes IAV infection, but undergoes degradation via a lysosome-associated apoptotic pathway during the late stages of IAV infection. Next, we wanted to further understand the mechanisms and significance of this phenomenon. By using the RNA interference screens and site-directed mutagenesis followed by western blotting, we found that lysosome protease, cathepsin C is involved in cortactin degradation in human cells infected with IAV. Furthermore, executioner apoptotic caspase, caspase-3 not caspase-6 or caspase-7 is involved in cortactin degradation during IAV infection, and caspase-3 cleavage site is located in the first actin-binding repeat of cortactin polypeptide. Finally, when expressed ectopically, the cleavage-resistant cortactin mutants decreased the amount of IAV progeny released from infected cells that was enhanced by the cleavage-sensitive cortactin wild type. These data strengthen the hypothesis proposed earlier that host cortactin plays an inhibitory role during the late stages of IAV infection, and IAV is facilitating its degradation to undermine such function.
Keywords:
influenza A virus; cortactin; actin-binding protein; actin-binding repeats; caspase; cathepsin

Influenza virus causes a significant burden and remains a threat to global public health [1,2,3]. Influenza A virus (IAV) is the most significant member of Orthomyxoviridae family and has been a successful human respiratory pathogen. A single-stranded, negative-sense, segmented RNA genome and a broad host range encompassing humans, birds, pigs, dogs, cats, horses, seals, and bats allow IAV to constantly circulate in nature and evolve into genetically diverse variants [4]. These variants cause regular seasonal epidemics, unpredictable pandemics, and lately frequent zoonotic outbreaks. Moreover, such evolving nature of IAV has prevented the development of a universal vaccine and aided IAV to successfully acquire the resistance against approved anti-influenza virus drugs [5,6]. The worldwide annual influenza vaccination programme, alternating in Northern and Southern Hemispheres, spearheaded by the World Health Organization (WHO) is a major tool to prevent or control seasonal influenza virus epidemics. Nevertheless, influenza virus still manages to cause significant morbidity and mortality worldwide annually [1]. In addition, recurring seasonal influenza virus epidemics cause significant loss of productivity due to work and school absenteeism and economic burden due to doctor visits and hospitalizations.
Considering all these IAV characteristics, it will be practically impossible to eradicate IAV from the nature. Therefore, it is critical to comprehensively understand the influenza virus-host molecular interactions to develop alternative and effective anti-influenza strategies. Recently, we have identified a role of host protein named cortactin in IAV infection [7]. Cortactin is a ubiquitously-expressed protein and is expressed in most eukaryotic cells [8,9,10]. Named after its cortical intracellular distribution and binding to actin [10], cortactin is a central regulator of branched filamentous actin network [8,11], which maintains cell shape and integrity and is critical for many cellular functions such as cell motility, migration and invasion, and membrane trafficking including endocytosis. Due to its role in cell migration and invasion, cortactin is associated with various types of cancers, and overexpression of cortactin is used as a biomarker for cancer progression [7,8,11]. In addition, cortactin has also been associated with the infection of various bacterial and viral pathogens [7,8,12]. Originally identified in phosphorylated form and as a substrate of Src tyrosine kinase, cortactin is now known to be a substrate of multiple kinases, and phosphorylation plays a central role in cortactin functions [8,10]. In addition, cortactin is also known to undergo acetylation [13], which regulates its binding to filamentous actin. We have found that cortactin promotes IAV infection, but undergoes degradation by lysosome-associated caspases in infected cells [7]. This was the first such observation, and the mechanisms and significance of the involvement of cortactin during IAV infection is not entirely clear. Herein, we present the data that provide further insight into the mechanism of cortactin degradation and its significance during IAV infection.

Virus inoculum was prepared in serum-free MEM and added to cell monolayers which were prewashed twice with PBS. For infection of MDCK cells, 1 µg/mL tosylsulfonyl phenylalanyl chloromethyl ketone (TPCK)-trypsin (Sigma-Aldrich) was added to virus inoculum. After 1 h of incubation at 35 °C, virus inoculum was removed and cells were washed once with PBS. Then, fresh serum-free MEM was added and cells were incubated back at 35 °C [7].

Predesigned small-interfering RNA (siRNA) oligonucleotides and a nontargeting MISSION control siRNA (Sigma-Aldrich) were used to deplete the expression of mentioned human caspases and cathepsins. The siRNA oligonucleotides were delivered to cells by reverse transfection using Lipofectamine RNAiMAX (Life Technologies) by following the manufactures’ suggested protocol. Briefly, siRNA oligonucleotides (10 nM) and Lipofectamine RNAiMAX (2 µL) were diluted separately in an OptiMEM I medium (Life Technologies), mixed together, and incubated for at least 20 min at room temperature. The siRNA-RNAiMAX complex was then mixed with cell suspension which was then transferred to a cell culture plate. Cells were incubated at 37 °C for 72 h before further processing or infection.

The plasmids were delivered to cells by reverse transfection using Lipofectamine 2000 (Life Technologies) by following the manufacturers’ suggested protocol. Briefly, plasmid DNA (2 µg) and Lipofectamine 2000 (3 µL) were diluted separately in an OptiMEM I medium (Life Technologies), mixed together, and incubated for at least 15 min at room temperature. The plasmid DNA-Lipofectamine 2000 complex was then mixed with cell suspension which was then transferred to a cell culture plate. Cells were then incubated at 37 °C for 48 h before further processing or infection.

Culture medium from the infected cells was collected and centrifuged at 17,000× g for 1 min at room temperature to remove the cell debris. The cleared culture medium supernatant was then mixed with 0.3% bovine serum albumin (Sigma-Aldrich). Ten-fold serial dilutions of culture medium was prepared and each dilution was used as inoculum to infect the confluent monolayers of MDCK cells in a 48-well culture plate (Corning) for 1 h at 35 °C. After removing the viral inoculum, cells were overlaid with serum-free MEM supplemented with 1 µg/mL TPCK-trypsin and 0.8% Avicel (RC-581, FMC Biopolymer), and incubated back at 35 °C for 18 to 24 h. The overlay was removed from the cells and cells were fixed with 4% formalin (Sigma-Aldrich) for 20 min and permeabilized with 0.5% Triton X-100 for 5 min at room temperature. Cells were then stained with mouse anti-NP antibody (1:1000; #MAB8251, Millipore) followed by horseradish peroxidase-conjugated anti-mouse IgG antibody (1:1000; #626520, Life Technologies). Finally, plaques were visualized by adding the TrueBlue peroxidase substrate (KPL).

All statistical analyses were performed using GraphPad Prism (version 6 or 8). The p-values were calculated using unpaired t-tests for pairwise data comparisons and one-way analysis of variance (ANOVA) for multiple data set comparisons. A p-value of ≤ 0.05 was considered significant.

3.2. Caspase-3, not Caspase-6 or Caspase-7 is Involved in Cortactin Degradation during IAV Infection

3.4. Ectopically Expressed Cortactin D93E and D116E Mutants Decrease the Amount of IAV Progeny Released from Infected Cells that is Enhanced by Cortactin WT

This research was funded in part by the Maurice and Phyllis Paykel Trust (IN208156) and the Department of Microbiology and Immunology PBRF fund.

The authors declare no conflict of interest. The funders had no role in the choice of research project; design of the study; in the collection, analyses or interpretation of data; in the writing of the manuscript; or in the decision to publish the results. 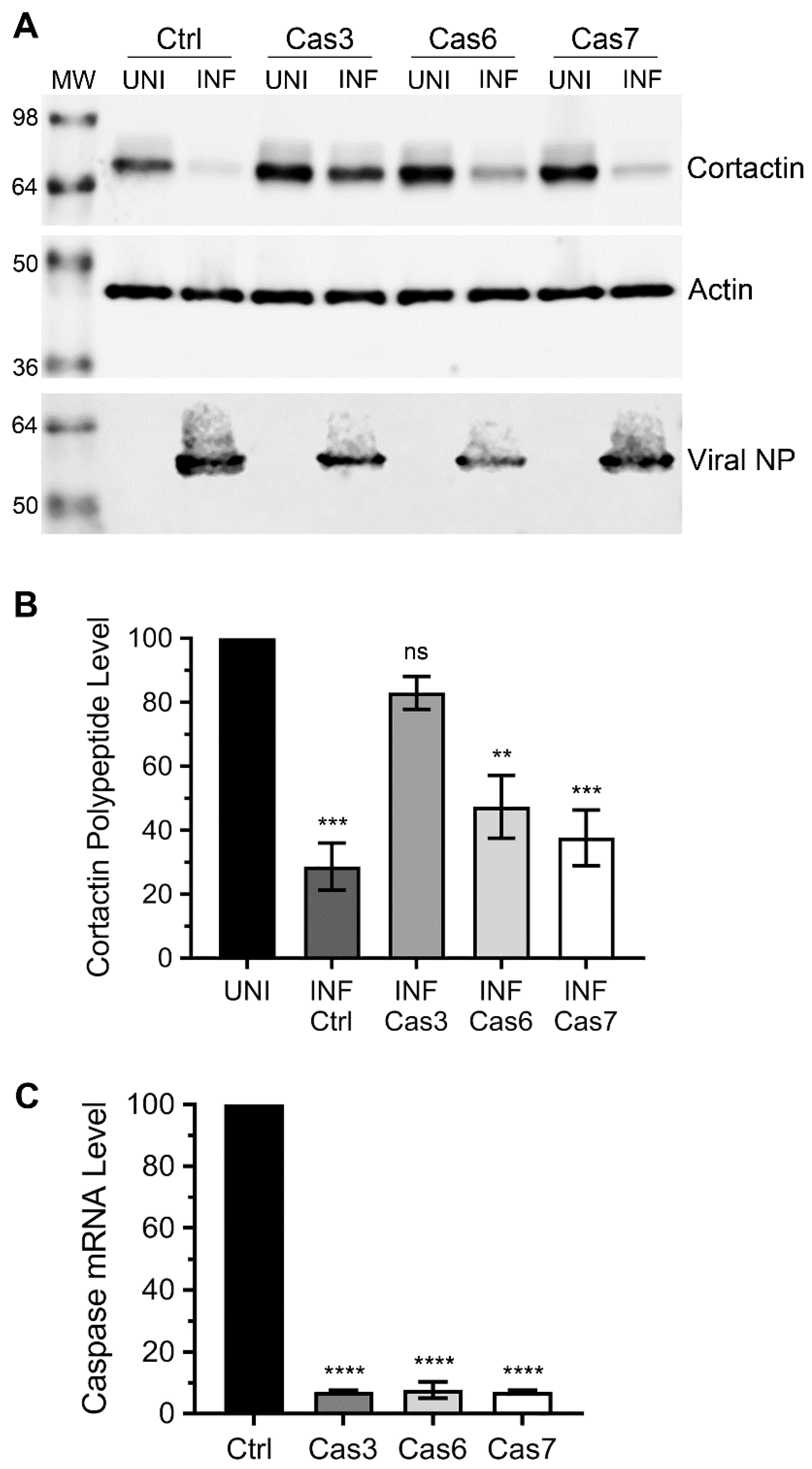