In soybean cultivar L29, the Rsv3 gene is responsible for extreme resistance (ER) against the soybean mosaic virus avirulent strain G5H, but is ineffective against the virulent strain G7H. Part of this ER is attributed to the rapid increase in abscisic acid (ABA) and callose, and to the rapid induction of several genes in the RNA-silencing pathway. Whether these two defense mechanisms are correlated or separated in the ER is unknown. Here, we found that ABA treatment of L29 plants increased the expression of several antiviral RNA-silencing genes as well as the PP2C3a gene, which was previously shown to increase callose accumulation; as a consequence, ABA increased the resistance of L29 plants to G7H. The effect of ABA treatment on these genes was weaker in the rsv3-null cultivar (Somyungkong) than in L29. Besides, G5H-infection of Somyungkong plants subverted the effect of ABA leading to reduced callose accumulation and decreased expression of several RNA-silencing genes, which resulted in increased susceptibility to G5H infection. ABA treatment, however, still induced some resistance to G7H in Somyungkong, but only AGO7b was significantly induced. Our data suggest that Rsv3 modulates the effect of ABA on these two resistance mechanisms, i.e., callose accumulation and the antiviral RNA-silencing pathway, and that in the absence of Rsv3, some strains can reverse the effect of ABA and thereby facilitate their replication and spread. View Full-Text
Keywords: extreme resistance; plant virus; Rsv3; soybean mosaic virus; callose; RNA-silencing pathway; abscisic acid; plant–virus interactions extreme resistance; plant virus; Rsv3; soybean mosaic virus; callose; RNA-silencing pathway; abscisic acid; plant–virus interactions
►▼ Show Figures 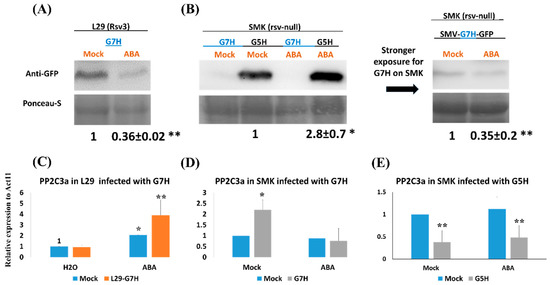