Animal diseases constitute a continuing threat to animal health, food safety, national economy, and the environment. Among those, African swine fever (ASF) is one of the most devastating viruses affecting pigs and wild suids due to the lack of vaccine or effective treatment. ASF is endemic in countries in sub-Saharan Africa, but since its introduction to the Caucasus region in 2007, a highly virulent strain of ASF virus (ASFV) has continued to circulate and spread into Eastern Europe and Russia, and most recently into Western Europe, China, and various countries of Southeast Asia. Given the importance of this disease, this review will highlight recent discoveries in basic virology with special focus on proteomic analysis, replication cycle, and some recent data on genes involved in cycle progression and viral–host interactions, such as I215L (E2 ubiquitin-conjugating enzyme), EP402R (CD2v), A104R (histone-like protein), QP509L, and Q706L (RNA helicases) or P1192R (Topoisomerase II). Taking into consideration the large DNA genome of ASFV and its complex interactions with the host, more studies and new approaches are to be taken to understand the basic virus–host interaction for ASFV. Proteomic studies are just paving the way for future research. View Full-Text
Keywords: African swine fever virus; virology; proteomics; virus–host interaction African swine fever virus; virology; proteomics; virus–host interaction
►▼ Show Figures 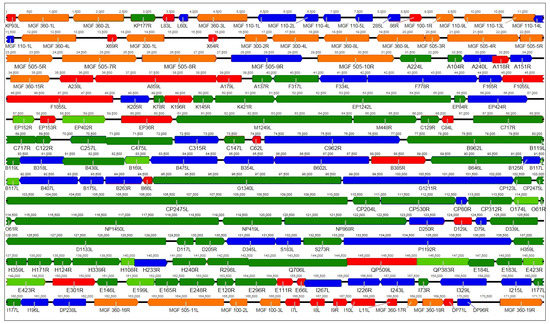