2.1. Production and Purification of HuNoV VLPs

A recombinant baculovirus carrying the VP1 gene (ORF2) of the Hu/NoV/GII.4/HS194/2009/US strain (GenBank accession no. GU325839, genetically closest to GII.4/Minerva/2006 strain)) was generated previously by our laboratory [32]. The VLPs were generated by inoculating insect cells (Sf9) with the recombinant baculovirus according to standard protocols described in our previous publications [16,18]. Briefly, after infection of Sf9 cells with the recombinant baculovirus, cells and media were harvested at 7–10 post-inoculation days (PID). The VLPs were pelleted through sucrose cushions and were further purified by CsCl gradient ultracentrifugation. The protein concentration was quantified using the Bradford method and the morphology of the VLPs was examined by transmission electron microscopy (TEM) after staining with 3% phosphotungstic acid (pH 7.0) [32]. The VLPs of historical GII.4 HuNoVs (1987, 1997, 2002, 2004 and 2006), their detecting primary antibody and HBGA profiles were described previously [21,24,28]. The GI.1 VLP and its mutant W375A, which lost binding to HBGAs, were generated as previously described [22].

The two recombinant baculoviruses for the expression of VLP mutants (D374A and G443A) of the HuNoV GII.4/HS194/2009/US strain were generated in this study. The Gateway entry vector (pENTRTM/SD/D-TOPO-HS194) containing the major capsid protein VP1 gene of WT HS194.2009 strain was used as a template. The QuikChange II XL site-directed mutagenesis kit (Agilent Technology, Santa Clara, CA, USA) was used to make the site mutation in the VP1 gene in the entry vector for the mutants. To mutate the D (aspartic acid) to A (Alanine) at amino acid 374 (D374A), forward and reverse primers were: 5′-GGTACTGATACAGAAAATGCCTTTGAAACTCACC-3′ and 5′-GGTGAGTTTCAAAGGCATTTTCTGTATCAGTACC-3′, respectively. To mutate G (Glycine) to A (Alanine) at amino acid 443 (G443A), the forward and reverse primers were 5′-GCCCGGATGCAGCGCGTATCCCAACAACATGG-3′ and 5′-CCATGTTGGGATACGCGCTGCATCCGGGC-3′, respectively. After confirmation by sequencing, LR recombination was performed with the entry vector and BaculoDirectTM Linear DNA to generate the recombinant baculovirus DNA carrying the mutant VP1 gene of HS194. The insect Sf9 cells were transfected by the recombination reaction products and the cells containing the recombinant baculovirus DNA were positively selected by ganciclovir. The expression of mutated HS194 capsid proteins in the Sf9 cells and culture supernatants were examined by immunoblot using the guinea pig antiserum against HS194 strain. The recombinant baculoviruses were propagated to prepare virus stocks with high titers for routine VLP expression. The production, purification and examination of GII.4.HS194 VLP mutants were performed as referenced above [16].

Extraction of lettuce leaves CWM was performed at 4 °C as described in our previous work [16]. Mature romaine lettuce heads were purchased from a local grocery store. Briefly, leaves were ground in liquid nitrogen to fine powder. The powder was then homogenized in 80% ethanol using polytron homogenizer (Cole-Parmer Instruments, Vernon Hills, IL, USA), followed by centrifugation for 20 min at 2500× g. The resulting pellet was subjected to a series of ethanol washes (80% twice and 100% once) and was then stirred for 2 h at 4 °C in 60 mL methanol: chloroform (1:1, v/v). The pellet was collected by filtration using Whatman® glass microfiber filters grade GF/A (Sigma, St. Louis, MO, USA), washed with ice-cold methanol: chloroform and finally with ice-cold acetone. The pellet was vacuum dried overnight at RT and the resulting CWMs were stored at 4 °C in a tightly sealed bottle under dark conditions.

The CWM-ELISA protocol was followed as previously described [16,18]. Briefly, CWMs were resuspended in PBS (pH 7.4) at 5 mg/mL, vortexed for 2 min, centrifuged twice at 500× g for 2 min and the resulting supernatant was used to coat MaxiSorpTM 96-well plates (Thermo Fisher Scientific Inc., Rockford, IL, USA). The plates were incubated at 4 °C for 18 h. Following three washes with PBS-T, blocking was performed with 200 µL of PBS supplemented with 2% nonfat dry milk (blocking buffer) for 1 h at 37 °C. Following blocking and washing, 50 µL of HuNoV VLPs diluted in PBS (10 µg/mL) were added and the plates were incubated for 1 h at RT. For all the historical GII.4 VLPs and mutants, the primary and secondary antibodies used were rabbit anti-GII.4 VLPs and a goat anti-rabbit IgG HRP-conjugated (KPL, Gaithersburg, MD, USA) at 1:1000 and 1:2000, respectively. The rabbit anti-GII.4 norovirus polyclonal sera was generated from a rabbit hyperimmunized with HuNoV VLP cocktail including GII.4 1987, 2002, 2006b and 2009. This antibody was able to detect all GII.4 VLPs from 1987 to 2009 used in this study. This antibody was generated as described previously [33]. For the GI.1 VLPs and its mutant, the primary and secondary antibodies used were a rabbit anti-GI.1 VLP antiserum and a goat anti-rabbit IgG HRP-conjugated (KPL) at 1:3000 and 1:2000, respectively. Both antibodies were diluted in blocking buffer and incubated at 37 °C for 1 h. Plates were washed four times with PBS-T following each step. Plates were incubated with peroxidase substrate tetramethylbenzidine (TMB) (KPL, USA) for 10 min at RT. The reaction was stopped with 0.3 M sulfuric acid and the absorbance was read at 450nm. Controls included: (i) wells coated with CWM but no VLP added (named “No VLPs”); (ii) wells with CWM, VLP and secondary antibody but without primary antibody (named “No primary”); and (iii) PBS coated wells with VLP, primary and secondary antibodies added (named “No coating”).

The VLP-lettuce tissue IFA protocol was followed as previously described [16,18]. Briefly, romaine lettuce heads were purchased from a local grocery store. The leaves were cut into small pieces (0.5 × 0.5 cm2), dehydrated in 30 mL of gradient ethanol series (70% (v/v), 90%, 95%, 100% and 100%) for 6 h and embedded in paraffin blocks. Five-micrometer sections were cut using a microtome and collected on glass slides (Fisher Scientific, Pittsburgh, PA, USA). Slides were dried at 37 °C for 2 h, deparaffinized in xylene for 15 min and rehydrated in 30 mL gradient of ethanol series (70%, 90%, 95%, 100%, 100%, v/v). Slides were incubated with cellulase R-10 (PhytoTechnology Laboratories, Lenexa, KS, USA) at a final concentration of 1 µg/µL at 37°C for 1 h. Following washing three times with 300 mL of PBS containing 0.05% Tween-20 (PBS-T), blocking was performed with 200 µL of PBS supplemented with 1% bovine serum albumin (BSA). For fucosidase digestion, each slide was digested with 20 U α-1,2 fucosidase (NEB, Ipswich, MA, USA) at 37 °C for 1 h. For inhibition with HBGA monoclonal antibody or lectins, a 200 µL of anti-H type 1 HBGA monoclonal antibody BG4 (Covance, Emeryville, CA, USA) diluted in PBS were added to the slides and incubated for 1 h at 37 °C. Plant lectins DBA (Dolichos biflorus), LEA (Lycopersicon esculentum), BS-I (Bandeiraea simplicifolia) and LcH (Lens culinaris), which recognize GalNAc (type A HBGA), GlcNAc, α-D-Gal (type B HBGA) and α-D-Man/α-D-Glc, respectively, were diluted in TBS buffer (50 mM Tris-HCl, 150 mM NaCl, supplemented with 2.5 mM MnCl2 and CaCl2) to a final concentration of 100 µg/mL added to the slides and incubated for 1 h at 37 °C. Subsequently, the slides were incubated with 200 µL of HuNoV VLPs (final concentration of 10 µg/mL) at RT for 1 h. The bound VLPs on lettuce tissues were detected using guinea pig anti-GII.4 NoV VLPs or rabbit anti-GI.1 VLP antisera (1:1000) and Alexa Fluor 488-conjugated goat anti-guinea pig or anti-rabbit IgG (Invitrogen) at 1:700 dilution (green signal). Negative controls used included slides treated as above but without the VLPs. The slides were washed three times with 300 mL PBS-T after each incubation step. The plant chloroplast autofluorescence was shown in red while nuclei were stained with 4’,6-diamidino-2- phenylindole (DAPI) and shown in blue. All pictures were taken using the same exposure time.

GraphPad Prism® version 5 (GraphPad Software, LaJolla, CA, USA) was used for statistical analyses. One-Way ANOVA followed by Tukey’s post hoc test was used to determine significant differences between the different treatments. Each treatment in each ELISA assay was run in triplicate and the ELISA was repeated at least twice to determine assay consistency. The VLP mutants (D37A and G443A) dose response ELISA with B-type saliva and PGM were only performed once with duplicate wells but with multiple VLP concentrations. The Alexa Fluor 488 green fluorescent intensity of all IFA images was measured by ImageJ software (https://imagej.nih.gov/ij/). The mean fluorescent intensity for WT VLPs (GII.4 or GI.1) was transformed to 100% and the intensity values of the different treatments were adjusted accordingly. Differences in means were considered significant when the p-value was <0.05. Data were represented as mean ± standard errors. Significantly different means were denoted by different alphabetical letters. The binding of VLPs to PGM or lettuce CWM was considered positive when the A450 signal was significantly higher than the highest A450 of control negative wells.

3.1. Binding of Historical GII.4 VLPs to Lettuce CWM Correlated with Their PGM Binding

Mutation of WT GII.4.HS194.2009 at amino acid residue 374, abolished VLP binding to PGM, as its binding signal was similar to that of negative control wells (Figure 3A). However, mutation at the amino acid residue 443 significantly reduced the VLP binding to PGM by over 80%. The binding of mutant G443A VLPs to PGM was significantly higher than negative control wells (Figure 3A). Binding of the two mutant VLPs to lettuce CWM showed a similar trend as their binding to PGM (Figure 3B). Specifically, mutation of the WT at residue 374 abolished its binding to lettuce CWM, while mutation at residue 443 significantly reduced VLP binding by over 60%. Using IFA, the WT GII.4.HS194.2009 VLPs were shown to bind to lettuce tissues (Figure 4Aa), while slides with no VLP added had no signal (Figure 4Ad). The VLP mutant D374A lost its binding to lettuce tissues (Figure 4b), while mutant G443A showed weak IFA binding signal (Figure 4Ac). Specifically, the fluorescent intensity of GII.4 WT was significantly different from that of D374A and G443A mutant VLPs and the negative control. Mutant D374A showed approximately 82% loss of fluorescent signal as compared to WT VLPs, while G443A showed a 65% loss in fluorescent signal (Figure 4B).

3.4. HuNoV GI.1 Binds to Lettuce Tissues Through a Fucose Moiety on H-like HBGA

3.5. Amino Acid at Position 375 is Important for GI.1 Binding to Lettuce

In conclusion, we have shown that the binding of HuNoV GII.4 and GI strains to lettuce is mediated through the virus HBGA binding sites. HuNoV GI.1 was shown to bind to lettuce in a similar fashion to GII.4, that is, through H-like HBGA antigen. The binding of historical HuNoV strains to lettuce correlated with their ability to bind to HBGAs. The lettuce binding profiles of historical GII.4 HuNoV strains which mimicked their PGM (i.e., HBGA) binding profiles as well as the mutants of GI.1 and GII.4 which lost HBGA binding resulting in loss or significant reduction in binding to lettuce provided multiple evidence to support our hypothesis. Overall, our research suggests that integrating epidemiological investigation during norovirus foodborne outbreaks with genotyping data will allow for a better assessment of the relationship between circulating/emerging norovirus genotypes and lettuce and the impact on foodborne disease.

We would like to acknowledge Baijun Kou and Frederick Neill who prepared and shipped the antiserum and GI.1 VLPs in Atmar’s lab, Xiaohong Wang in Wang’s lab who helped in routine VLP production and cell culture.

The authors declare no conflict of interest. The funders had no role in the design of the study; in the collection, analyses or interpretation of data; in the writing of the manuscript or in the decision to publish the results. 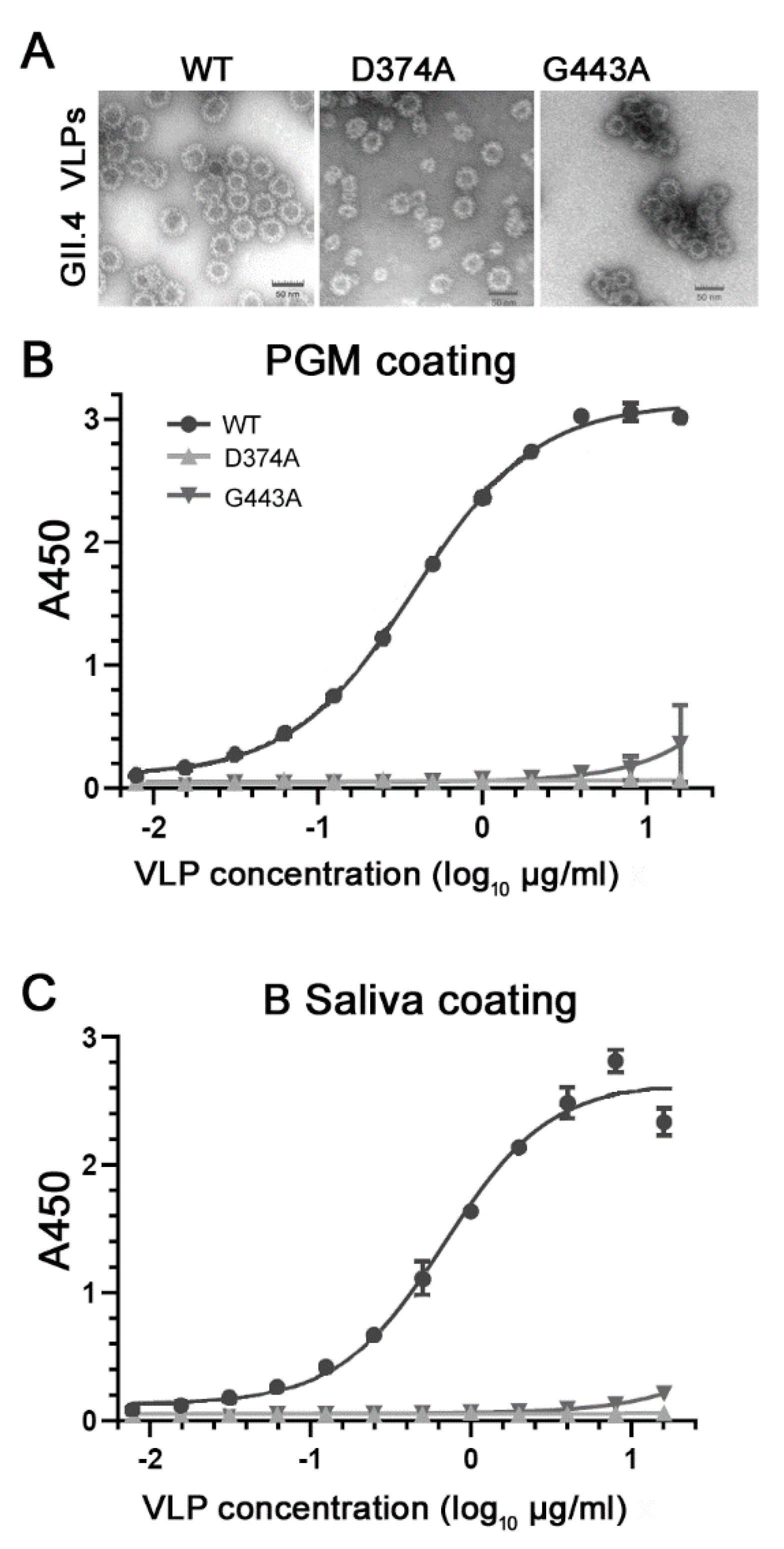