Exploiting the Legacy of the Arbovirus Hunters
Previous Article in Journal

As we all know but tend to forget, bacteriophages were involved in several central discoveries in biology during the last century. Indeed, study of bacteriophages led to the discovery that mutations are at the basis of genetic variations [1], that DNA is the basis for genetic transmission [2], as well as the discovery of restriction enzymes as a matter of bacterial resistance to their bacteriophage predators [3]. The latest breakthrough involving bacteriophages came from the bacterial resistance mechanisms involving the clustered regularly interspaced short palindromic repeats (CRISPR) [4]. Interestingly enough, these discoveries and many others are now widely used in biology (evolutionary biology) and more particularly in molecular biology and biotechnology. Moreover, the current context of a worldwide increase of therapeutic failures leading to human deaths or severe disabilities (such as amputations) due to pathogenic bacteria resistant to all available antibiotics, has triggered a renewed clinical and agricultural interest in bacteriophages, as therapeutic complements and/or alternatives [5] against bacterial infections. This reinforces the need to create opportunities for dialogue and exchanges of experience between actors, and also to discuss the need for an adapted (or entirely new) regulatory framework for the reintroduction of bacteriophage therapy, in Europe, and other countries.
As an introduction, Claire Le Marrec summarized the different activities of the French network in 2018, recalling the two workshops organized during 2018 dedicated to the ecology of bacteriophages (Nancy) and electron microscopy for bacteriophage study (Grenoble). Also, specialists in computational biology organized a “viromathon” consisting of the analysis of same raw metagenomic data by different groups (both long reads with Pac-Bio and short reads with Illumina) leading to virome assembly and annotation. Data will be presented in the next meeting in 2019 (October 8–9 in Grenoble). Last, the projects of two young colleagues of the network were selected and funded by the French National Research Agency (ANR) in 2018: “Anthropophage”, a multi-site ethnography of the current development of applications of bacteriophages in human, animal and plant health (Charlotte Brives, CNRS, UMR 5116 Bordeaux) and “BacPhageChat”, the deciphering of the crosstalk between bacteria and prophages (Aurélia Battesti, Laboratoire de Chimie Bactérienne, UMR 7283, Marseille).
The scientific program of our annual meeting was structured in three themed oral sessions entitled “ecology and evolution”, “bacteriophage-host molecular interaction”, and “therapy and biotechnology applications”. We recalled hereafter the meanings of some of the 21 oral presentations, including three keynote lectures. A poster session included 22 presentations (Table 1). Afterall, 72 participants attended the meeting from both public and private sectors, coming from France, Belgium, Ireland, Germany, Portugal and Canada (Figure 1).

This session started with a keynote lecture from Jennifer Mahony (University College Cork, Ireland) entitled “Some like it sweet – host recognition by bacteriophages of lactic acid bacteria”. This refers to the nature of the receptors of these bacteriophages at the surface of their Gram positive host, which are sugars. Lactococcal bacteriophages have been the focus of intense research due to the economic loss they can induce in the dairy fermentation industry. Lactococcal bacteriophages have an “exquisitely” narrow host range, borne by receptor binding proteins that share structural folds and sequence similarity with the exception of the receptor binding domain. This latter domain can be swapped between bacteriophages, thereby swapping host specificity. What about the polysaccharides at the surface of the different Lactococcus strains? There are three defined genotype groups depending on the cell-wall encoding polysaccharide operons and with further groups expected based on PCR typing data. The diversity comes from the genetic diversity of the glycosyltransferases and presumably encodes a variety of sugars arranged in penta- and hexa-saccharides on the cell surface. These sugars are a signature of the particular strain and explain the high degree of host specificity of lactococcal bacteriophages.
The next presentation by Lia Marques Godinho (post-doc in the group of Paulo Tavares, I2BC UMR 9198, Gif-sur-Yvette) provided evidence about the importance of the chaperone GroEL in the biogenesis of bacteriophages. Molecular chaperones play an essential role in the folding of nascent chain polypeptides, refolding of misfolded proteins, and other house-keeping and stress-related functions. SPP1 is a dsDNA, lytic Siphophage infecting the Gram positive Bacillus subtilis. During its infection cycle, SPP1 massively hijacks the host resources, leading to the synthesis of >9 Mbp of viral DNA and 150,000 polypeptide chains to produce 200 virions in 30 min, highly challenging the cell. The goal of this work is to investigate the dependence of SPP1 on B. subtilis GroEL. To this purpose, L. Marques Godinho inactivated groEL by knock out and investigated the infection dynamics of SPP1, SPP1 DNA replication and viral particle assembly on the mutant strain. The most affected step of the SPP1 infection was the formation of viral particles, and more specifically bacteriophage capsid assembly. A similar role of GroEL in the morphogenesis of Enterobacteriaceae bacteriophages was shown.
Mathieu de Jode (graduate student in the group of Laurent Debarbieux, Institut Pasteur, Paris) discussed how a single bacteriophage protein efficiently disrupts the host physiology by targeting sigma factors. A bacterial cell infected by a bacteriophage becomes a viral factory (or virocell) as most of its resources are dedicated to virion production [6]. To investigate this transformation of the bacteria into a virocell, the group is studying the infection of the opportunistic pathogen Pseudomonas aeruginosa by bacteriophage PAK_P3. Using a global transcriptomic approach, M. de Jode found that PAK_P3 alters the transcription of over a thousand host genes and temporally regulates the expression of its own genes [9]. Amongst the early expressed bacteriophage genes, the scientists focused on gp92, which is one of the few non-structural genes conserved between Kpp10virus and Pakpunavirus genera [10].
Finally, Isabelle Bertrand (MC U. Lorraine, LCPME UMR7564, Nancy) reported on the efficacy of different treatments to inactivate enteric viruses. Heat and chlorine treatments were considered as they are the most frequently used treatments to inactivate viruses in the food industry and water treatment, respectively. The effects of heat and chlorine on the physico-chemical characteristics of viral particles are still poorly understood. I. Bertrand presented data on the MS2 F-specific F-RNA bacteriophage that is used as a model for pathogenic enteric viruses. Using a concentrated bacteriophage lysate (1014 UFP/mL), she showed that exposure to heat should exceed 72 °C and 10 min to massively inactivate and provoke physical disruption of the bacteriophage capsids. In contrast, exposure to 200 mg/mL hypochlorite for 10 min was not sufficient to damage the bacteriophages seriously. A combination of both moderate heat and hypochlorite however resulted in an optimal effect. The observed appearance of hydrophobic domains on the surface of capsids during treatment of viruses could play an important role in distinguishing between infectious and inactivated viruses.

R.F. drafted the article. All authors commented and edited the manuscript.

The fourth meeting of the French Bacteriophage Network (Bordeaux) was supported by CNRS (INEE and INSB institutes), INRA, University of Bordeaux, Bordeaux INP and Maison des Sciences de l’Homme d’Aquitaine (MSHA). We thank all the authors that contributed to this meeting.

The authors declare no conflict of interest. The funding sponsors had no role in the decision to publish this report. 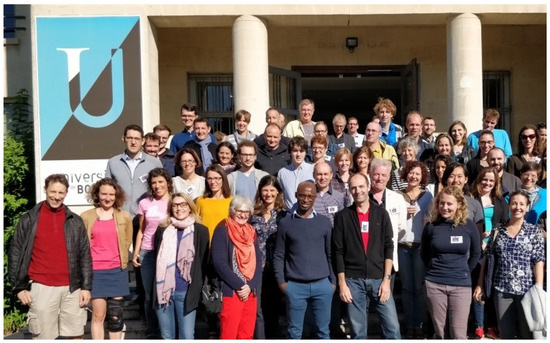 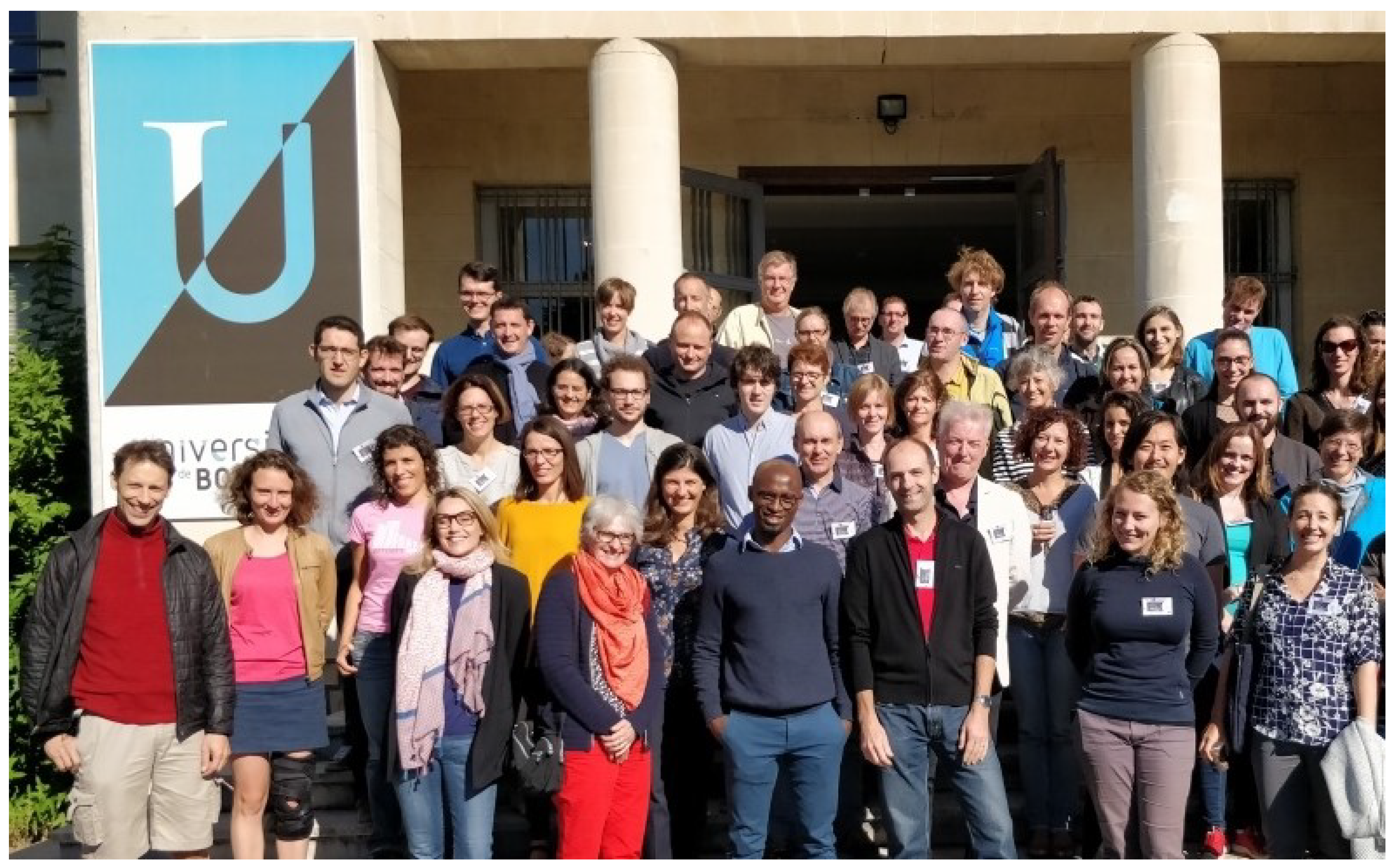